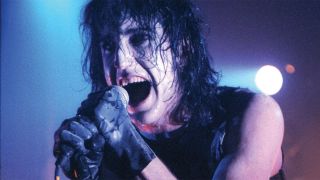 Released on TVT Records (which had previously put out discs of television theme songs), it was embraced by both the alt-rock and industrial dance communities and earned Nine Inch Nails a loyal following.

With a new home and a vanity label on which to bring in new talent, the band started working on a follow-up. But Trent had no intention of making accessible synth-pop for his new owners; The Downward Spiral is strange, unsettling and schizophrenic.

“At first, I thought there was a danger that there weren’t any real singles on the record, and people that really liked Pretty Hate Machine wouldn’t like The Downward Spiral,” Trent said in early 1994, before the March 8 album release.

“And I was worried that people that were more into the metal sound of Broken wouldn’t like it. I thought I quite intentionally may have shot myself in the foot commercially. I didn’t do that just to fuck myself up, either. It’s what popped out of my head and was the strongest statement I could make. Fortunately, people identified with it.”

Songs like Mr. Self Destruct and March Of The Pigs were fast, heavy and reminiscent of Broken but with more emotional depth. Most of the rest of the album was mid-tempo, with an underworld of unnerving sounds that ebbed and flowed like a stop-motion film of contaminated ocean waves.

It was all hellishly infectious. Piggy balanced skewed samples with a sluggish, near-reggae bassline; Ruiner drew from hip hop beats and a simple melody reminiscent of Pretty Hate Machine’s Down In It, before evolving into a near-orchestral wash of sound. It was a feast of unconventional rhythms, barbed hooks, abrupt tempo changes and torrents of noise that sometimes continued after the rest of the instruments cut out.

“There are a few parts on the record that are purposely messed up structurally,” says drummer and sound designer Chris Vrenna, who was in the band from Pretty Hate Machine through the end of the tour for The Downward Spiral.

“The live drum solo at the end of Piggy is intentionally crazy and off-tempo, and for that piano part at the end of Closer, Trent played it but didn’t quantize the MIDI [a process in which slightly off-tempo notes are digitally altered so they’re perfectly in time with the beat], so it wasn’t exactly the same feel or speed as the rest of the song.”

There was no denying the artistry behind The Downward Spiral. Trent’s determination to follow his instincts and peel back the layers of his previous work to see what lurked deep inside resulted in an album that was emotionally dense, utterly authentic and immaculately conceived.

And there was a brazen perversity that flowed through it all. Even after the band finished the music for Closer, the closest thing they had created to a pure pop song, Trent put a lyrical stamp on it that rendered it virtually unplayable by mainstream media.

“We were all working on something one night and Trent came in the next morning and showed us the lyrics of Closer for the first time,” recalls Chris Vrenna. “Our producer, Flood, and I looked at each other and I told Trent, ‘Well, you had the pop single for the record until you said ‘fuck’ in every line of the chorus.’ Trent started laughing and he said, ‘I know.’ He did it on purpose because he didn’t want, necessarily, to have such an overt pop song.”

Two months after the release of The Downward Spiral, alternative radio was clamouring for a clean edit of Closer. All Nine Inch Nails had to do was take the swear words out of the chorus. Trent didn’t want to replace them with bleeps or sound effects, so he reluctantly agreed to leave a blank space, but it wasn’t quite that simple.

“He said, ‘I wonder what the least amount of the word ‘fuck’ is that we can snip out of the word and get away with it as a clean version,’” recalls Chris. “So when you listen closely to the clean version, you can hear the beginning of the ‘f’ and the end of the ‘k’.”

“Bowie’s Berlin trilogy was big for us,” Chris admits. “We listened to Low, Lodger and Heroes a lot, as well as Iggy’s The Idiot. Those were really important records that helped convince us that we were doing the right thing by making this weird music that we wanted to make. Trent never gave a shit about doing anything to please the fans.”

To colour his dark creativity blood-red, Trent chose to write and record The Downward Spiral at 10050 Cielo Drive in Los Angeles. It was the site where actress Sharon Tate and four others were brutally murdered on August 8, 1969, by four members of the Charles Manson family.

Trent was fascinated by the history and the lingering feeling of evil. The band intentionally placed the mixing board and main control area in the exact location of the couch where Tate was found murdered, Chris says, and Trent slept in Tate’s master bedroom. Nine Inch Nails weren’t the only ones drawn to the ugly past of the place.

“All these Charles Manson fans showed up while we were there,” Chris recalls. “We would have people climb over the gate. The house was on a hill by itself, and people would park at the bottom of the hill a block below it and climb through the brush up the front of the hill and end up in our front yard. I can’t tell you how many times I’d walk in and go, ‘Fuck, who the hell are you?’”

“It was a breeding ground for ideas,” Chris says. “It took a long time, but everything flowed naturally and we knew we were on to something. Our producer Flood was living with us, we were in Los Angeles, and we were able to explore the whole scene and do rock star stuff.”

During the week, Trent and Chris were determined and dedicated, so partying was kept to a minimum. But weekends were another story. “We would throw parties at the house and do crazy shit,” Chris recalls.

“We saved the partying for the weekends. It wasn’t a daily thing. It was a special occasion kind of thing. The ramp-up of serious drugs and alcohol happened on tour, like it always does. Idle hands do the devil’s work. You go onstage for 90 awesome minutes and then what are you gonna do all night? You go party because you get to sleep all day until soundcheck the next day.”

With the foundation set, Nine Inch Nails worked on various songs simultaneously. Chris, Flood and Trent looped many of the recorded drums, guitars and keys, then fed them into the computer where they further manipulated into the sounds. As involved as the process was, the musicians enjoyed the spontaneity and the results spoke for themselves.

“A lot of what I loved about …Spiral is that many of the sounds aren’t even real instruments, they’re noises,” Chris says. “The Becoming has that ‘chinky-chinky-chink’ rhythm at the beginning. Me and Trent each had a handful of silverware and we dropped it all in little piles and recorded the sounds they made. We did anything and everything to make these sounds into really cool songs.”

As sound designer, Chris spent much of his time walking around with a portable DAT machine and making field recordings of various noises and sound effects from movies. He cut up the recorded content and built sample banks.

“I’d stay up all night and come in with, like, 40 different new loops or noises or samples or parts,” he says. “I’d give them to Trent in the morning while he was in the bedroom working on lyrics. He’d stop what he was doing, play through them and go, ‘Holy shit, this one’s cool! Alright, we’re starting a new song today!’ And the next thing we did would be based on that loop I put together.”

The last song Nine Inch Nails recorded for The Downward Spiral was Hurt. The album already featured plenty of bleak, despairing moments, yet the album closer was another beast entirely – mostly organic instead of electronic, and more vulnerable than confrontational.

“We didn’t do that at the Tate house,” Chris says. “It was an idea Trent had been working with on his own for quite some time. He came to us and said, ‘I’ve got one more. It may not work. It’s a really sad song. It’s definitely an album closer.’”

Trent and Chris entered A&M Studios with producer and engineer Sean Beavan to work on the track. “Trent was singing the words and we were all watching in awe,” recalls Chris. “By the second chorus, I had tears running down my face and I looked over at Sean and his face is all red and his eyes are all watery. We were all crying. Once we got our shit together, we all went, ‘Yeah, that’s a great one right there.’”

Looking back at the experience of making The Downward Spiral, Chris concludes that it was definitely a product of its time and that, had it been made a decade later, audiences might have thought it was too weird or noisy for mass consumption and wouldn’t have given it enough time to pick up on the nuances.

“People don’t want to really listen closely to anything anymore and discover the subtleties or why something might be great even if it’s not traditional,” Chris says. “There was something about the whole process of making that album – the house, the timing and all the music – that made it one of the best years of my life.”