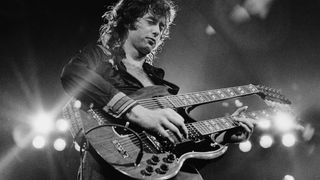 Released in 1971 on Led Zeppelin’s untitled fourth album, Stairway To Heaven combines pastoral English folk with an electrifying blues guitar solo, and there’s absolutely no way it should work. The lyrics are prog-level daft and it’s no surprise the song became a byword for rock pomposity in the punk era. It’s been parodied countless times, been the subject of a high profile lawsuit, and banned from guitar shops. Yet it’s undeniably brilliant, a testament to how inventive British rock was in the post-Beatles early 70s.

“I had an idea for a piece that was going to involve acoustic 12-strings, a layering of guitars and a 6-string solo,” says Jimmy Page. Out of that simple premise came Stairway, an enigmatic eight-minute classic wrapped around what Classic Rock crowned the greatest guitar solo of all time.

The solo is your exhibit A for what the soft spoken legend from Surrey contributed to the genre: Pagey made white electric blues sexy. From his beautiful picked acoustic intro to the pentatonic-fuelled orgasm of a solo, Stairway To Heaven is the ultimate rock guitar masterpiece. Now, let’s pick the thing apart…

0.01: The opening acoustic part, which can still get you barred from some music stores in America is pure English folk. Page was undoubtedly influenced by British folk guitarists Bert Jansch and Davey Graham. You can hear their influence in the style and structure of Stairway….

That pastoral vibe is further evoked by John Paul Jones’ wobbly wooden recorders which kick in at 0.13 and Robert Plant’s dreamy vocal entry at 0.52. Incidentally, the song is in the key of A minor… not quite the saddest of all keys but pretty damn close.

2.02: Page, who has been picking away at the same acoustic part for a couple of minutes by now, adds some interesting dynamics with a double-picked section. It’s a bit like what McCartney played on The Beatles’ Blackbird, you know, that fingertips skipping across the strings thing.

2.13: Jimmy makes his first real departure from the picked into with a cool chord-based rhythm riff while JPJ introduces his bass and Plant croons “it makes my wonder…”

2.39: Page falls back on the acoustic picking but this time it’s double-tracked with a clean electric, possibly his famous “number one” Gibson Les Paul. Let’s take a brief time out here to explain. For years it was assumed that Jimmy used the ‘59/‘60 Gibson Les Paul Standard [the exact year is uncertain as the guitar’s serial number was lost during a refinish] he got from Joe Walsh of The James Gang on all of Stairway… . And why the devil not? That’s your classic image of Jimmy in action: bare-chested; dragon suit; hair like a burst mattress… a low-slung sunburst ‘59/‘60* Les Paul Standard set at scrotum height.

“I basically got my [Fender] Telecaster out to do that solo,” says Page. “It was the same Telecaster that I’d played on the first album, the one Jeff Beck had given me that I’d used in The Yardbirds, a bit of a magical guitar, really.”

So, if Sherlock Holmes was involved here he’d deduce that Jimmy probably used another electric on the song’s non-solo bits as they were recorded before he uncased the Tele fir the solo.

3.02: Right, dipping back into the song, the double-tracked acoustic and electric picking gives way to the beautiful chiming electric guitar part - not a million miles away from the feel of the big riff in Cream’s Badge - that makes its debut at

4.18: The next big dynamic shift occurs when John Bonham’s drums pile in while Plant goes all Percy Thrower with tales of bustles in yer hedgerow and the rest of it…

5.35: Jimmy pulls out a big strummed open D-based move to introduce the solo. This dramatic pause is no doubt something his old mate Pete Townshend would approve of, even if he didn’t like Led Zep much.

At this point everything else had been recorded including “a bass, an electric, 12-strings, recorders, a whole manner of things,” says Jimmy. “I always put the solo on at the end because you’re really living the track by then, and being the producer you’ve already supervised all the overdubs that have already gone on.”

5.56: While he’s often accused of being a sloppy lead player, Jimmy Page is at his exhilarating best when he just lets fly with an idea. This solo is, let’s be honest, sexy as fuck. Says Jimmy:“I worked out how I was going to actually come into it, the first two or three notes, but after that I just said, ‘Roll it,’ took a deep breath, that’s what I usually do, and then go.”

Jimmy opens up the solo using a fairly unremarkable blues lick based around the A minor pentatonic scale which establishes the theme for the rest of the solo. Anyone can learn this lick but listen closely to the first note he bends up to in the solo and you’ll hear some brief but sweet vibrato. That’s what separates a good lead guitarist from an exceptional one.

5.58: What makes the opening lick so, well, ‘Jimmy’, is the final F note which occurs outside of the A minor pentatonic scale of A, C, D, E and G. Page used the extension to F to fit the F major 7 of the solo section’s chord sequence but has either by accident or design created a killer hook. Again, the tone is important here and we obviously now know what guitar Jimmy was brandishing. That F note really pops. Says Jimmy: “Even though I’d been playing Gibson Les Pauls, I wanted to get that bite of the Telecaster on it.”

5.59 to 6.04: Page ‘answers’ his opening lick with a cool variation that sets him up for some quick fire bends, hammer-ons and pull-offs. As Page confirms, “It’s ad-libbed just as much as it would have been in any of the live shows.” These latter sequences have a real bouncy Celtic vibe that fits with the song’s medieval maidens and bustling hedgerows feel.

6.11: There’s a strange note in this run that could sound wrong in anyone else’s hands but somehow Page makes it work. It’s a neat lesson that sometimes playing outside a scale - something that Steve Vai does exceptionally well too - can create a hook.

It just proves how much improvisation was going on here. In fact, Page would use the studio version of the solo as a guide when playing live while always looking to stretch himself. “I was constantly changing it, like we did with all the songs. I’d stretch it and try and see what I could get out of it, kick it around a lot. That doesn’t mean I ever surpassed the one on the record.”

6.15: Page continues on his way with a repetitive phrase using hammer-ons and pull-offs. This is a classic blues tool and actually not that difficult to play. Executing it with this much panache is another matter. Again, it backs up Jimmy’s claim that the solo is improvised as it sounds so spur-of-the-moment. Page: “You can tell that it’s just flying, it’s not a laboured solo, it’s not something that’s worked out, written down and read. It’s more like a stream of consciousness.”

Listening to this repetitive lick, it feels like he’s trapped in the sequence and can’t get out - he repeats it eleven times in all - and that creates the tension that makes for a great solo. Of course, he eventually breaks out of it with a screaming bend and a fast run of notes…

The tonal palette on the solo is completed with the modified 1959 Supro 1690T Coronado model that he loaned to the Rock’n’Roll Hall Of Fame in Cleveland, Ohio. The amp came stock with two 10” speakers but at some point Jimmy had them replaced with a single 12” job. Cranked, the amp reveals some sweet compressed overdrive. While Jimmy used the ‘59 Tele, the Supro and a Tone Bender fuzz box on the first Led Zep album, it sounds like the guitar and amp are running sans pedal on this recording.

6.25: More classic blues moves unfold as Page plays call & response guitar with himself, bouncing off a simple slide lick with some incendiary lead work. Listen to his vibrato at 6.31. That’s what we should all be aiming for! Also, at 6.37, he pulls off a fabulous long slow bend before climaxing in a series of triplets at 6.42 and then good old Percy Plant is back in business.

6.44: The solo is done but Page’s choppy rhythm work deserves a mention here. He propels the song along here playing off Plant’s vocals beautifully. Again, in the wrong hands this could have come off as some hideous white funk but here it helps form the foundation of hard rock. Yeah, it’s fair to say that Jimmy was on form that day.

And there you have it, eight minutes of rock genius with Jimmy Page and his band mates playing at the top of their game. If you play guitar, you will learn this song at some point in your life. It’s a masterclass in taste, tone and how to use simple dynamics to build a song to an explosive climax. Pagey never really topped his work on Stairway… (although he tried to improve on the solo live, the studio version was always “the one”).

Of course, when you’ve created the ultimate rock masterpiece, there really is nowhere else to go.