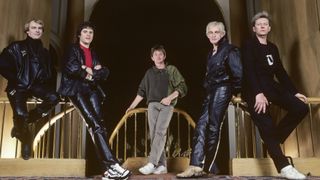 By 1981, Yes had disappeared. As the new decade dawned, the line-up that had given us Drama the previous year had cracked and splintered. Keyboard player Geoff Downes and guitarist Steve Howe became founding members of Asia and enjoyed huge success in their own right. Vocalist Trevor Horn was on an upward trajectory as a producer. And that left bassist Chris Squire and drummer Alan White trying to find a cohesive musical direction.

“Atlantic, to whom Yes were signed, were determined to keep Alan and I working together,” recalls Squire. “We had tried to form a new band, XYZ, in 1981 with Jimmy Page, but that had fizzled out. And then in 1982 Trevor Rabin’s name came up. Brian Lane, our former manager, had actually played me some of his tracks in 1979 and I thought it was the new Foreigner album. But three years later, we agreed to meet up with him.”

While Squire and White contemplated where life might lead in the post-Yes era, multi-instrumentalist Rabin had been facing an exciting, albeit uncertain, future. After releasing three well-received but commercially disappointing solo albums, he relocated to Los Angeles from the UK after signing to Geffen.

“I went through an intense writing phase out there, when I effectively came up with the songs which would appear on 90125,” he explains. “But Geffen weren’t impressed, so they dropped me.”

After getting some interest from other labels, Rabin eventually agreed a deal with Atlantic, and it was Phil Carson, one of the most powerful men at the company, who put him in touch with Squire and White.

“He felt that I needed a rhythm section,” Rabin says. “So, the three of us agreed to meet at a sushi bar in London. Chris was late, which I was to discover was usual for him, but we eventually went back to his place and jammed. I have to say, it wasn’t a very good session. But there was clearly a chemistry between us which was worth pursuing.”

Squire is a little more blunt about that initial meeting. “We got pissed at my house, then thought it was a good idea to play together. After 10 minutes, we all knew it could work, even though the jam session was rubbish!”

They brought in former Yes keyboard player Tony Kaye to complete the line-up. “Trevor was great at playing guitar and keyboards, but he was something of a virtuoso,” reveals the bassist. “What we also needed was someone who could come in and play solid keyboards, to augment what Trevor did; someone very grounded who would add texture to the sound. And I thought immediately of Tony.”

The new quartet became Cinema. In spite of the fact that there were now three former members of Yes in the group, there was no way they were going to revive that band’s name. “I was totally against it,” admits Rabin. “I wanted this to be seen as a new project, and not the continuation of an extinct 70s band.”

Cinema spent eight months working on their material at John Henry’s Rehearsal Studio in North London. Rabin reveals: “What we ended up with was a combination of songs I had originally demoed to get the Geffen deal, plus some stuff Chris came in with, and other tracks we collaborated on from scratch.”

And it was then that Horn came into the picture. “He was actually approached about being the singer for the band,” recalls Rabin. “Chris thought we needed a frontman, someone who just sang. But Trevor and I just didn’t get on at all. In fact, things became very heated between us, and in the end it was decided not to bring him into the band.”

Squire concurs on the original reason they approached Horn. “I felt we needed a singer in the band, and I mentioned to Trevor Rabin that maybe the guy for the job was Trevor Horn, who of course I knew from the Drama period of Yes. So we met for lunch and I offered him the job of singing in Cinema. But Trevor was really making a name for himself at the time as a producer – he’d already had success with ABC and Dollar – so he didn’t want to give up this new career and join a band. However, Trevor did agree to produce our album, and I was delighted to have him on board.”

However, Rabin didn’t exactly share Squire’s enthusiasm about Horn being the right man to produce the fledgling band’s album. “I remember thinking he was totally wrong for this project. He was a pop producer, and I was very sceptical about what he could actually do for us. But in the end, I have to admit that Trevor turned out to be exactly the right man for 90125.”

Cinema and Horn went into London’s Sarm East Studios in November 1982 to record the album (they would also work over the next several months at AIR and Sunpark Studios, again in London). And they had virtually the entire album finished when the story took another twist, with the arrival of Jon Anderson.

“Phil Carson came down to Sarm East and liked what we were doing,” explains Squire. “But he kept on and on at us about changing the name to Yes. His logic was that if we were to use the ‘Yes’ tag then we’d have a ready-made audience and the album would be much bigger. He wanted me to call Jon and get him involved, and eventually – just to shut him up – I agreed to contact him.”

At the time, Anderson was working in the South of France on a project inspired by the artist Marc Chagall. But a fateful call from Squire would change all his plans. “I was in London for a weekend when Chris phoned me. He said he wanted to come over to my place in Knightsbridge and play me some of the music from his new band. We ended up sitting in his Rolls Royce listening to what Cinema had recorded so far and it blew me away. The sound was so fresh. I loved the vocal harmonies, and Trevor Horn’s production was great. I was a big fan of his production style anyway.

“Chris then asked me if I’d like to sing on the album and join the band. I told him that if I did that then effectively we were making a Yes album, and he replied, ‘Well, that’s the idea.’”

At this juncture, Rabin was unaware of plans to bring in Anderson, although he now appears very sanguine about what happened. “Obviously, the label didn’t think my vocals were strong enough. But the other guys in the band didn’t want to hurt my feelings so they never confronted me. However, recording had gone so far down the line that to replace all my vocals would have been a huge task. That’s why I sing lead vocals on some tracks, although I’d have been happy for Jon to have done them all.”

But the guitarist objected strongly to the band now being known as Yes. “I was still very much against it, but was outvoted.”

Despite coming on to the scene rather late, Anderson still had some input into the writing process. “I changed some of the choruses and added lyrics to certain songs as well. I only had about three weeks in the studio to do my parts, but found it to be a very rewarding experience. I loved working with Trevor Horn as he was always so receptive to any ideas I had.”

But Squire has a different take on the relationship between the returning vocalist and the producer. “Oh, they butted heads quite a lot. At times, there was major friction.”

To add to the melodrama in the studio, Kaye had his own problems with Horn. “They didn’t get on at all,” says Rabin. “So, he left the band before we’d finished the album, and I had to finish the keyboard parts.”

Squire, though, has an alternative version on what happened. “Tony actually completed all his work. So, because he wasn’t on good terms with Trevor Horn, we suggested he should go home to Los Angeles. But he was never fired from Yes, nor did he quit. The only reason we had Eddie Jobson feature in the video for Owner Of A Lonely Heart was because he was around when we shot it. We never talked to Eddie, or anybody, about replacing Tony.”

“We did hold discussions with Eddie about coming into the band for touring,” disagrees Rabin. “And we also considered Duncan Mackay. But we got Tony back in the end because he knew all the parts and with Horn not involved in touring, there was no chance of any of those problems rearing up again.”

Rabin recalls the studio sessions as running well behind schedule. “We had a very laissez‑faire attitude. There were times when I was in the studio with just one of the engineers doing my parts because Trevor was away working on Malcolm McLaren’s Duck Rock album. It was typical of the inefficient beast called Yes.”

And there were even problems with Horn’s final mix, as Squire recalls: “Trevor Rabin wasn’t satisfied and did a couple of his own remixes. But the label were very happy with the original mix, and we didn’t want to compromise and have a few Rabin mixes alongside the rest from Horn. So we went for the amazing sound that Trevor Horn got for us.”

So where did the idea for the album title originate? There’s no consensus on this, with both Rabin and Anderson claiming to have come up with the idea. But Squire has his own view. “The suggestion came from Garry Mouat, who designed the sleeve. We couldn’t come up with any suitable title and he thought of using the catalogue number. Actually, it was supposed to be called 89464. That was to be the album catalogue number. But we were two months late delivering the album [in July 1983], so the release date and the catalogue number changed.”

The success in 1983 of 90125 gave Yes a fresh impetus for a new era of achievement, which is something that Squire acknowledges: “We reinvented Yes,” he says. “Because the album was so fresh, we picked up a new audience. Some 70s diehards might have been upset by what we did. However, it gave us an extra dimension.”

“I was delighted with the reaction the album got,” adds Rabin. “The fact that Owner Of A Lonely Heart was a big hit gave us a new profile for the MTV age. I was determined this wouldn’t be seen as a continuation of Yes as they were in the 70s, and we got it right. It was a new beginning for Yes, not just another chapter.”