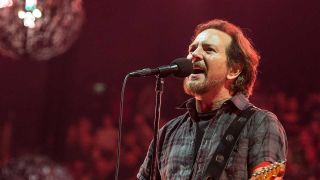 This gig was cancelled a few weeks back when Eddie Vedder blew his voice at another show at this exact venue. Tonight he apologises and makes a promise: “I look forward to paying you back,” he says.

And boy, does he. It’s the end of the tour. They have a point to prove and some making up to do. And “Tonight, I don’t have to save my voice,” says Eddie.

If this is classic rock – and it is, duh – then it’s refracted through the times we’ve lived through. At times they could remind you of The Band – but only if The Band had also been massively into punk, metal, goth, indie, shoegaze, new wave, etc etc.

This is 21st century classic rock: visceral and exciting, but also warm, engaging, natural. We've had enough of charismatic leaders who turn out to be charlatans. Vedder breaks down the relationship between the "stars" and the crowd and it leaves you asking: Have Pearl Jam quietly become one of rock’s best, most beloved and even important bands in the world right now?

The entire band looks like they could work at a design agency. Eddie Vedder wears customary short-lived flannel shirt and a parody Unknown Pleasures tee  – he looks more like a dad on his day off, down the park with his kids, than an international rock star. He’s not trying to be “dangerous” or “cool”. And by not trying, he is.

Because this isn’t just about the show – Bono and his pals had to wheel out a giant Lemon after the leather jumpsuits and wraparound shades became passe. Pearl Jam have never been embarrassing. These are guys at work, not prima donnas and ponces – men with a serious/fun job to do. They have come to play songs that mean the world to them and to their audience. It’s not about the lazers or the light show, it’s about the connection.

They're true to themselves, and to their audience

Being called "sell-outs" has been a criticism that's unfairly dogged Pearl Jam since their beginnings. Being successful from a then small, alternative scene in the Pacific Northwest does not a sell-out make. It was bullshit thirty years ago, and it’s bullshit now.

Looking out over their audience you get a sense that they don't see a bunch of fans to fleece, they see a load of people they want to move.

Later, taking the piss out of Trump, Vedder reads out signs from the London protest that made him laugh. One of the least funniest, but most appropriate, was “Make empathy great again”. It’s a motto fit for Pearl Jam themselves.

They (still) have something to say

Perhaps more so now than ever. While the band have never shied away from their full-throated support for human rights and political issues, the month’s delay between London shows afforded the band the luxury of inviting a guest along: hot on the heels of his scene-stealing appearance at the London anti-Trump march, Pearl Jam got the Trump Baby blimp down to the O2 where the orange buffoon (sorry, balloon) provided many a gig-goer with a brilliant photo-opp.

Vedder found a moment throughout the show to voice his displeasure at the current US President - the day after the latter’s astonishingly disturbing summit with Putin - by reading out some of the best British protest signs ("God save The Queen from the facist tangerine" and "We'd call Trump a cunt, but he isn't deep or warm" go down particularly well). He talks about the ridiculous travel advisory recently given to US tourists in Europe, and before a heartfelt Daughter he name-checks Jim O'Rourke's Women Of The World, Take Over. Preaching to the converted? Of course. That's literally how this works. It's his show.

Amid all the hoopla, Vedder still found time to say that at least the protests were uniting people, so hey, maybe that’s one good thing that’ll come out of #45’s time in office. Maybe.

In Mike McCready they have a bona fide guitar hero

And, more’s the pity, probably rock’s most criminally ignored and underrated. I mean, he’s not just a bit good, but phenomenal. Whether it’s the sweet Little Wing stylings of Yellow Ledbetter, the ferocious riffery of Even Flow or the coruscating solos of the epic Crazy Mary jam; from Gilmour-esque fluidity to the Townshend-style bluster to Hendrixian, psychedelic wail, every note last night was on-point. The man’s a masterclass in excellence.

Y’know, like a proper band. “Brothers” as the clichéd phrase (and one Vedder employed) goes. But clichés are clichés for a reason and watching them play, you get the impression it’s true. After the first few years beset with Spinal Tap-style drummer issues, Pearl Jam finally settled once Matt Cameron – “the hardest working man in music,” says Vedder – parked his backside on the drumstool twenty years ago.

The drummer gets several call-outs throughout the show and between keeping the backbeat of the whole shebang going, really does appear to be a pivot around which the rest of the band crowd. Literally. For much of the gig, Ament and Gossard are crowded around the riser, with plenty of eye-contact and interaction ensuring they are tight as the proverbial duck’s arse. Old-skool, innit.

But Vedder's still the focus. You can imagine Pearl Jam developing into a mini version of the E-Street band, willing and able to bend to their singer's whims at a moment's notice. Extend the song while he goes walkabout? Easy. Throw in a Beatles cover? No problem. Bugger off so he can do a solo spot? Already on it.

Singer/two-guitar/bass/drums/organ line-up. Crazy good songs that everyone knows the words to and isn’t afraid to sing along to? Check. Massive guitar solos? Check. Epic jams? Check. Blistering covers? Of course. And of classic rock stalwarts. Tonight we’re treated to Tom Petty, The Who, Victoria Williams and and Bob Dylan (by way of Jimi Hendrix).

Do they follow a by-rote setlist night after night? Hell no, you never know what you’re gonna get from Pearl Jam. Spontaneity is still a thing.

They mix up their own songs too, which means people react with frequently unfettered delight when deep cuts and fan favourites are aired. All night, Eddie doesn't have to introduce a single song, but the opening notes of each are greeted like World Cup Final goals.

They're brilliant at letting an evening find its own way. The lightshow is smart without being the focus of attention (from a distance, there's an unusual amount of what looks like wicker at work), the opening one-two of Oceans and Nothing As It Seems is hardly going to set any arena on fire, but this is all about momentum. The evening progresses smoothly from heartfelt welcome to Def Con One levels of hysteria, and the climax is unforgettable as the curfew is smashed and the fines accumulate.

In Eddie Vedder, they have frontman who not only can sing (helpful, obviously), but one who has the audience in the palm of his hand to such a degree that at one point he simply asks them to take three steps back to avoid a crush at the front and the crowd moves en masse, without fuss, on his cue - it’s quite the sight to behold. Not only does this lessen the crush and give people room to move into as the next crescendo approaches, but it's a brilliant example of charisma and crowd control working in tandem.

The crowd taking 3 steps back at Pearl Jam at the 02, London, last night. Scott Rowley

They came back for a legit, old-school, curfew bustin’ encore

Yeah, yeah, these days we all know there’s no such thing as a spontaneous encore - they’re all choreographed within an inch of their life, meticulously planned with lighting cues, timings and all of that. Y’know, the let’s keep the big hitters in the back pocket for an spontaneous ‘encore’ hogwash.

But PJ’s final hour take on Dylan’s All Along The Watchtower was played with full house lights up… (as was the previous encore, actually, which we were unsure whether that meant the O2 staff wanted us out or whether the band just wanted to see the whites of our eyes). People had already flooded for the exits, but those who remained were treated to McCready going full Hendrix, Gossard, Ament and Cameron playing like their lives depended upon it and Vedder ending the whole shindig with a shit-eating grin and a devil-may-care microphone stand smash…

Just like the one Vedder was liberally swigging (from the bottle, of course). They’re getting better with age. Pearl Jam have grown into themselves and their audience has grown along with them - we witnessed several father/son/mother/daughter family combos at the O2 show, all bonding over the love of one band.

If you're a straight male, there's very little that's more enviable in another man than the ability to play the guitar in a way that makes women dance... and Pearl Jam are masters at this. Just ask the mother/daughter duo standing next to Classic Rock, who wear identical Condition Critical t-shirts (Pearl Jam, not Quiet Riot) and spend the entire show instinctively, unashamedly mirroring each others' moves.

Pearl Jam were great when they first played London - a Borderline show referenced by Vedder early in the set. But they’re even greater now. This is a band at the height of their powers.

Is it just us, or is Jeremy basically Bon Jovi’s Wanted: Dead Or Alive?

Well, kinda. The outro, anyway. I’m sure musicologists can explain better, but just listen to Ament’s final bass refrain and tell me it’s not…