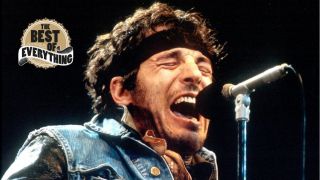 It doesn’t take a genius to work out why, when tasked with furnishing us with an entry in our Best of Everything series, Canadian rockers The Glorious Sons plumped for Bruce Springsteen. As well as a predilection for good, old-fashioned rock’n’roll, TGS also take cues from The Boss' expansive storytelling in their cinematic tales of adventures and teenaged misbehaviours.

To celebrate their UK tour, which kicks off next week, guitarist Jay Emmons joins us to talk us through the best Bruce Springsteen songs as he sees them. Check out full tour dates at the bottom of the page.

“This is by far my favourite song by Bruce Springsteen. I’m On Fire is a haunting masterpiece that talks about an illegitimate love affair. The song tells an intriguing story with powerful lyrics – how can you go wrong? I also love the video which features a short narrative at the beginning, reflecting the lyrical content and storyline. Overall a classic that will never get old.”

“Thunder Road is one of Bruce’s early classics and an opening track on his breakthrough album Born to Run. This track has everything I look for in a song. It begins as a softer piano ballad, and gradually builds into a full on banger. This song is the ultimate rock opera.”

“Another classic by Bruce. The emotion in his vocal delivery is what makes this song for me. His voice is so pure and unpolished and you can’t help but feel his passion and pain coming through. The outro also completes this song for me, as the band each their emotional peak while Bruce soulfully howls the final lyrics.”

Rosalita (Come Out Tonight) (The Wild, The Innocent & The E Street Shuffle, 1973)

“This is another one of Bruce’s early hits and such a fun song. In our earlier days, the boys and I would chant along with this song to get amped before our shows. Rosalita triggers great memories for me of the early days of being in the Glorious Sons, and I love the lyric “Your papa says he knows that I don’t have any money”. Pretty much sums up the life of a touring musician.”

“This is one of Bruce’s darkest and most intimate songs. It is the perfect showcase of how Bruce can tell a story through song like no one else. I was also really intrigued by the way he recorded this song. This song was featured on his rustic solo album Nebraska and was recorded sitting in the living room of his LA home on a tape recorder, just one voice and an acoustic guitar. Just simple and perfect.”

“This was the very first Bruce Springsteen song I ever fell in love with. The first time I heard it was as a kid while listening to his greatest hits album. Spirits In the Night was the song that unlocked Springsteen for me and was the first song that really turned me on to his music, making it possibly the most important song on this list!”

“One of my favourite things about Bruce are his lyrics. He has the ability to relate to such a large audience while still staying true to his story. In this song, Bruce does a great job of sharing how life seems so promising when you’re young and innocent, and how things get tough and difficult as you get older and are faced with the harsh realities of life. This is a true blue collar song that everyone can relate to.”

“If I Should Fall Behind is a simply a great love song. What can I say? I am a sucker for the softer sentimental stuff. In a world where it is rare for two people to find meaningful love that lasts a lifetime, this is a beautiful song that leaves you hopeful that it could still exist.”

“This song is featured on one of Bruce’s earliest albums, The Wild, The Innocent & The E Street Shuffle. The song is a mellow listen and I really love acoustic guitar and the unorthodox production. You can tell Bruce is still finding his way as a songwriter in this song. Everything is drawn out and unique and creates a real special moment on this early record.”

“Although I am a fan of all things Bruce Springsteen, I put this one on the list for our guitar player Koster. He thinks it is Bruce’s best song by far.”

The stories behind the songs: The Ghost Of Tom Joad by Bruce Springsteen