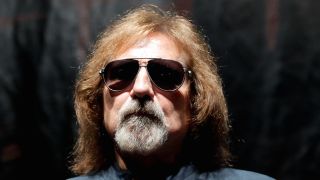 Geezer Butler is much more than just Black Sabbath’s bassist. If Tony Iommi’s riffs inspired the sound of metal, then Geezer’s lyrics spawned the blackness we metalheads hold dear. Here he goes back to his roots to talk religion, pacifism and Black Sabbath’s early days…

“Birmingham got heavily bombed during WWII, so in the early 50s it was still full of a lot of bombed-out buildings. We had rationing – you could only get a government allowance of food, but I didn’t know anything different, so I had a very adventurous childhood. I had air raid shelters and destroyed buildings to play in. It was great for the imagination.”

You clearly have a strong command of language…

“I was always good at English. When we had to do composition or literature I was always good at that. And I always loved reading; I’ve never gone a day without a book. I was brought up a strict Catholic… I was really interested in the spiritual world so I used to read a lot about that.”

“No, I’d have that drummed into me at school and at church so I wanted to read about the other side. I’d always hear about Satan, so I wanted to find out what that was about, so I started reading up on astral planes, all that kind of stuff. I used to have weird experiences when I was a kid; orbs appearing to me…

"It sounds like I’m nuts. When I was four, I felt a presence in the room and I saw this orb hovering above my head and I could see the future in it and it just disappeared into the fireplace. I used to have these dreams… I’d wake up and it would happen the next day. A lot disappeared when I got to my teen years.”

So can we thank Catholicism for Sabbath?

“Yeah, and The Beatles. I had three brothers who were into Elvis and Buddy Holly. My sisters were into Cliff. I didn’t have something that was my own and then The Beatles came along. I was like, ‘Yes, thank you!’ My hero was John Lennon so I learned rhythm guitar, but then Cream came along and Jack Bruce’s style of bass playing blew me away.”

You were the first person to play with Ozzy, in Rare Breed, before Sabbath…

“Yeah, me and Ozzy were together first. I was 13 or 14 and playing other people’s stuff but we were getting heavier and heavier and then the singer left. I was always hanging out at guitar shops. I saw this advert, ‘Ozzy Zig wants a Gig’ with the magic words: ‘has own PA’. It didn’t matter what he sounded like. It had his address and I went down there, and the next day Tony and Bill Ward went round.

"Ozzy had been to school with Tony, and they hated each other. Tony had bullied him at school, so it was me one day, Tony the next day, so Ozzy decided he’d go with me because he didn’t want to play with Tony. That’s how we started. We did like two shows together in Rare Breed.

"Then I got fired from work and wanted to go into music full time, so we went round to Tony’s house to see if he knew any drummers. Bill was there at Tony’s house. He said, ‘I’ll join the band if Tony does’ and there we went, first as Earth, then as Sabbath.”

“We actually started as a six-piece. We had Tony as a lead guitar, a rhythm guitar and a sax player. After I’d seen Jack Bruce I wanted to play bass so I switched to bass and got rid of the second guitarist and the sax player so it was just the four of us.”

War Pigs, Children Of The Grave… many of your songs comment on war…

“My uncle was shot in the war and my dad had been loosely in the IRA. He’d tell me about fighting the British in Ireland. My brother collected Nazi stuff – he was Hitler-obsessed. War and religion were all around me. When I started writing lyrics I was rebelling against everything I grew up with.”

Pacifism in the 60s inspired a lot of music, but your outlook was far darker…

“Yeah, there were a lot of American bands, like Bob Dylan, talking of protest, but they were living in style and I was still stuck in Aston with no money, so I was writing from the heart. Our lyrics were about what we were going through at the time and we never thought we were going to get out of there.”

“When we were Earth we were a 12-bar blues band; we played whatever blues clubs we could find. When we started Sabbath, they loved it. At the time everyone was into Motown and soul; that’s all they wanted to hear around Birmingham so there were literally two clubs you could play in, and people got fed up seeing us every week, so we had to go to Germany and Switzerland to get residencies… horrible little places where nobody turned up. It was good for us.”

When did you know you were becoming infamous?

“We didn’t think anything of it until the first American tour and the first album. There was some black magic organisation that wanted us to play at a stone circle… We said no – we were sort of against Satan as opposed to promoting it – so they allegedly cursed us.

"The head of the white witches called our management and said he knew we had a curse put on us, and we should wear crosses and he’d do a ritual thing. It all sounds so hokey.”

Did you believe him?

“Yeah, that’s why we started wearing crosses! Ozzy’s father made them for us. He used to work at a metal factory making car parts, so he made us these great big crosses out of spare metal.”

Didn’t people confuse you with Black Widow, who were infamous for doing black masses on stage?

“Yeah, absolutely – sacrifices and all that crap. We weren’t into it, it was too corny for us. A lot of people used to get us mixed up with them and black magic, but they put one album out and I never heard of them again.”

How’d you handle the rocketing success?

“We took it in our stride because we stuck so close together. It was years before we saw any money. We were idiots – we didn’t have any sense whatsoever about business, so it didn’t change our lives monetarily.”

Did you suspect Sabbath would inspire metal?

“We didn’t think we were that different. Cream and Hendrix were the two heaviest bands around – we went heavier because that’s what we were into. Led Zeppelin had just come out and so we wanted to get heavier than that, but we didn’t think it was earth-shattering.

"The press slagged our first album to death. They said we couldn’t play our instruments, the songs weren’t songs, the lyrics were crap, the riffs were awful, Tony was just an Eric Clapton clone… We were like, ‘Fuck it, who cares?’”

Clearly, your success changed you as a band.

“Yeah, we could sense it happening. We were stuck together for six or seven years non-stop. We hadn’t had any social life, and it just wears thin. We were all into drugs and booze and you never get time away from it. I was the first victim. They fired me first, for about two months, and I was glad. It was like, ‘Thank fuck! Freedom!’

"Then they asked me back. It’s just the change… something had to go. There was a lot of bickering. A lot of things that should’ve been said were not being said. I came back, and Ozzy was stoned and drunk all the time and wasn’t doing anything, so he left and we started doing Never Say Die [1977], and Ozzy came back after we’d written half that album so he wouldn’t sing any of the things we’d written and we had to start it again.”

Had you met Ronnie James Dio at that point?

“That didn’t happen until Ozzy had gone. Tony was thinking about just working with Ronnie regardless of Sabbath. Tony had met Ronnie, had liked what he heard, had liked him as a person and was going to write an album anyway. When we parted ways with Ozzy, Ronnie came and chatted with us and it just worked.”

So Sabbath has experienced two rebirths with Ronnie, once in 1979 and with Heaven & Hell’s formation in 2006.

“Everyone’s different. Ronnie fitted in straight away and immediately came up with vocals. We were like, ‘Thank God!’ because we had all these riffs with no vocals. We were panicking.”

Was it frustrating that you couldn’t call yourselves Sabbath?

“I wanted a different name when Ozzy left but the record company held us to the name Black Sabbath. This time, I felt because the original band had gotten together for the last few years of Ozzfest, that people would associate it with that line-up, so it was the time to change the name.”

The opening riff to Symptom Of The Universe was possibly one of the fiercest, most seminal metal riffs ever, but the lyrics are unclear – what is the symptom of the universe?