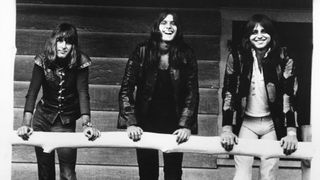 Arguably progressive rock’s first supergroup, Emerson, Lake And Palmer took the scene by storm. With bold adaptations of classical music blended with startling, original compositions, virtuoso musicianship and a flamboyant, theatrical flair, they issued a string of hugely successful world-beating albums in their heyday. Here’s 10 of their best tracks.

From one of the best live albums of the era, ELP, in all their considerable pomp, hype up the Newcastle crowd by firing on all cylinders and ritually disemboweling a Hammond organ. This high-octane journey moves at a breakneck pace while smartly negotiating some tricky, dangerous curves along the way.

Though their reputation for grandiosity and braggadocio would later define ELP in the popular mind, there’s a fluidity and expressiveness in this piece that’s unique within their back catalogue. Part folk ballad, part jazz excursion, this reflective track, written before Palmer joined, captures a more stylistically open-ended band at work.

As each new, painstakingly overdubbed, instrumental voice slowly falls into step behind Carl Palmer’s insistent snare across each of its eight reiterations, this simple but hugely effective theme from Trilogy swells to truly mighty proportions, taking on the mantle of an army marching towards certain victory.

Greg Lake showcases his skills as a producer on this song that was written and recorded as work on their debut came to an end. Pared down to their essential components, Lake’s use of simple but effective tools like studio reverb and varispeed imbue this vividly fraught, claustrophobic blues rocker with teetering, high-wire drama.

Written when he was 12 years old, Greg Lake’s elegy to a mythic figure fallen in battle had previously been rejected by King Crimson. Entering the progressive rock pantheon as ELP laid down their debut, Emerson’s improvised Moog solo, recorded in what he thought was a run-through, is truly heroic.

A bold arrangement of the fourth movement of Argentine composer Alberto Ginestera’s 1961 piano concerto, it’s easy to understand why Emerson regarded this as the most complex track ELP tackled. Veering between the polarities of hair-raising dynamics and sharply contrasting harmonics, Palmer’s nuanced solo completes the shock and awe sonics.

ELP always possessed a knack of being able to marshal apparently disparate elements into something both cohesive and powerful. Covering more musical ground within the first two minutes than some would manage across an entire album, much of the following momentum is buoyed by one of Greg Lake’s best vocals.

With almost every bar and beat of Brain Salad Surgery’s epic centrepiece filled with a cavalcade of vocal hooks, frantic cadenzas and rhapsodic solos, including a soaring lead guitar breakout from Greg Lake, the sheer velocity of this bombastic tour de force and its turbo-charged complexities remains an astonishing overture.

The everyday tale of a tooled-up cyborg armadillo killing all and sundry should be absurd, but such is the ferocity of Emerson’s Ginastera-inspired musical invention, Lake’s anthemic vocals and Palmer’s surgical strikes, the side-long suite is a compositional triumph from the start of its electronic chorale to the thrilling, tumultuous climax.