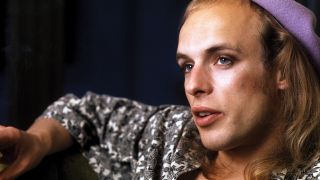 “Brian likes to be busy – he likes getting stuff done,” observes Robert Wyatt of the man he first encountered in the summer of 1972, when Eno added ominous synthesiser drones to the Matching Mole’s Little Red Record album. Wyatt, of course, playfully understates the frequency and extent of Eno’s compulsive creativity.

After jousting egos with Bryan Ferry one time too many, Eno – the man who famously described himself as a ‘non-musician’ – quit Roxy Music in 1973 and went on to release Here Come The Warm Jets (1974), Taking Tiger Mountain (By Strategy) (1974), Another Green World (1975) and Before And After Science (1977).

The albums, recently reissued on half-speed mastered vinyl format, remain the blueprints for a revolution, an explosion of ideas whose sonic and conceptual shrapnel have studded the fabric of popular culture to such a degree that to listen to them today is akin to being given a preview of what much of rest of the 20th century would look and sound like. Had Eno done nothing else with his time but these four records, his place in the pantheon of genuinely innovative artists would be secure.

Yet what makes this period and these records all the more amazing is that they happened while he was embarking on a string of groundbreaking collaborations that would in time take his name around the world, earning his spurs as a distinctive producer, founding the visionary Obscure Records label, and coining the name ‘ambient’, as well as producing the cornerstone works of this whole new genre of music.

Witty and charismatic, he was irresistible to the music press, applying as much arty erudition as eyeliner during the interviews and photoshoots of the times. Likely to be holding forth on anything from John Cage to pubic hair, he was Eno the dilettante, the bon viveur, the chancer who danced to a different tune, one that took in bitchy pop and spiky rock. He was all glam, sham and thank you, ma’am when it came to appreciating his many fans.

His songs and subjects conjured exotic rhymes. He was the boffin who, with a sweep of a stagey mock limp wrist, set about subdividing time into colliding particles to formulate a big bang all his own.

Bedecked in feathers, fur and androgynous allure, he was an unlikely conduit between the oblique space amid avant-garde theory and rock practice, who thought nothing of pairing Bo Diddley with Bob Fripp.

Roxy Music guitarist Phil Manzanera was determined to help Eno after his ex-bandmate stepped out into a solo career: “I didn’t feel sorry for him because I knew he’d be fine cast adrift – though not, I hasten to add, from me or Andy Mackay [Roxy’s oboe/sax player].”

Needles In The Camel’s Eye, the opening track from Here Come The Warm Jets, was written in Manzanera’s mum’s front room in Clapham. “I knew Majestic Studios was nearby and we ended up recording there. I was conflicted because at the same time I was recording Stranded with Roxy up at Air Studios, so I didn’t publicise the fact that I was also nipping along to Eno’s sessions every night. That wouldn’t have been seen as politically correct!” laughs Manzanera, referring to the schism between Ferry and the newly launched solo artist.

Eno’s winning personality and off-kilter method of putting a song and an album together attracted many willing and varied collaborators, ranging from members of King Crimson to Hawkwind, Pink Fairies, Sharks and Audience.

Manzanera, who co-founded the legendary band 801 with Eno in 1976, says: “They all wanted to come and help him out and make him do something. I just remember the making of that album […Warm Jets] and the second one, Taking Tiger Mountain, which I was on most of, as being tremendous fun.”

These records and Eno and Robert Fripp’s (No Pussyfooting) (1973) and Eno’s solo album Discreet Music (1975) rippled outwards and made lifelong fans of many who heard them – including David Bowie, who drafted Eno in to work with him on Low.

Eno once described that album as an attempt to buck the momentum of a successful career and the subsequent limitations they force upon an artist. The same might be said of Another Green World and Before And After Science, released several months after Bowie’s first instalment of what became known as The Berlin Trilogy.

Both AGW and BAAS push away from the rock and pop shoreline which their predecessors had shadowed so successfully. Gradually trading the outré for the ‘outer’, the tone both records employed was less hopped-up, instead dabbling with more muted colour schemes.

Eno had the knack of getting the best out of the best players, even though they were often unaware of how their contributions might end up being used, if at all. He had worked on Genesis’ The Lamb Lies Down On Broadway in 1974 and after guesting on Robin Lumley and Jack Lancaster’s 1975 concept album Peter And The Wolf, performing the part of the Wolf, Eno invited Phil Collins and Percy Jones, who had provided the album’s rhythm section, to work on what would become Another Green World.

Jones admired Eno’s ability to give players plenty of room while simultaneously keeping a tight grip of the outcome. “One idea he had, he went over to a piano and played an A in a repetitive medium tempo,” Jones says. “He told us to play off that so we vamped and modulated and that turned into Sky Saw from Another Green World.

“I think the cool thing about that was that he was really using the musicians to their best. He let everybody be creative but then on top of that he’d keep everything in control. We did quite a lot of recording with him, though he didn’t use all of it. I never saw a chord chart.”

A crucial feature in the sonic landscape of Eno’s work during this period is, of course, his mellifluous voice, an instrument this so-called non-musician knew how to wield with expert precision.

“When we did the vocals, he got into a process where we would play the track as loud as we possibly could in the control room through the speakers, with a microphone set up in front of them, and he would sing along,” says producer Rhett Davies. “I remember when he double- or triple-tracked his voice, it was a fantastic sound.”

That sound is one of the main reasons why Robert Wyatt loves these records – it comes down to Eno’s voice and his imaginative and often startling use of words.

“It’s a very true voice, very strong, and I think he’s a fantastically good lyricist,” says Wyatt. “I always wished he’d done more but those that he’s done are absolutely terrific and way ahead of most other people. I like his no-nonsense singing style, which doesn’t date at all because it’s just his voice doing notes. When he’s on my records, I always try to get him to sing. The singing on my track Shleep was our last attempt to do that girlie chorus thing we started with Taking Tiger Mountain.”

While this quartet of albums capture Eno’s delight in augmenting or subverting the humble song, the drift towards ambient music, especially Music For Airports, released in 1978, suggests his attention was beginning to move elsewhere. Following Before And After Science, it would be the best part of 20 years before he added his idiosyncratic lyrics to his work. That shift in priorities is something Rhett Davies laments: “I think it was just that the whole process of ‘the song’ being the main thing didn’t really turn him on any more.”

Davies, who got his start in the industry via Taking Tiger Mountain, suggests the reason these records galvanised artists such as David Bowie, Talking Heads, U2 and others, is that their appeal is transgressive in nature, albeit in a subtle way. “I think they broke the boundaries. They were the first records I can remember that did that. They weren’t conventional songs; they weren’t simply verse/chorus/verse. They were landscapes and pictures and they were wholly different.”

Some artists are keen to be involved in their back catalogue but Eno has shown little interest in such activities, declining the chance to oversee the 2005 CD remastering, or be involved in the current vinyl editions.

“I think famously he’s said that he likes to look forward and hates to revisit the past,” Manzanera says. “It’s very difficult to get him to talk about the past or want to play any of the old stuff. He’s driven, and that’s what’s great about him: he’s exactly the same driven person that he was when I first met him in 1971. You’ve got to hand it to him: he believes in something, in constant change, and he’s doing it.”

The reissued vinyl of Here Come The Warm Jets, Taking Tiger Mountain (By Strategy), Another Green World and Before And After Science are out now via UMC/Virgin EMI. See www.brian-eno.net and www.enoshop.co.uk for more information.