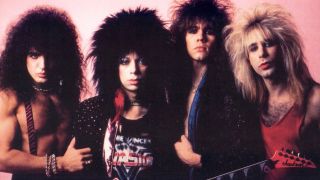 This is bigger than Vinnie Vincent, let’s face it. This is about the cruel impermanence of life and how you should never trust your heroes, especially the rock’n’roll ones. If you were a kid in the mid 1970s – and if you’re reading Classic Rock magazine, there’s a more-than-decent chance that you were – then Kiss was probably your first love. More than that, they were a religion for a generation born into chaos and disappointment and diminishing returns. Four clearly mythical creatures, spandex-bound high priests in the church of goodtimes with their own bible (well, comic book) and their own fire-belching, fog-shrouded, highly mobile electric church, each one representing some forbidden knowledge of the decadent universe just out of a child’s reach – Gene the emissary of the Dark Side, Paul the Sex God, Ace the acid-blasting cosmic jester of drugs and booze and everything totally far-out, and Peter – well, I’m still not sure what Peter represented but people are really into cats, so it had to be something.

The bitter truth, of course, is that these were four knucklehead New York Dolls rip-offs who got lucky and rode a greedy, greasy merchandising train as far as it would take them, but that was not evident to all the starry-eyed rock’n’roll children of the 70s. We just loved them, unconditionally, and assumed that it would always be this way.

But it wasn’t. I was so nuts for ‘em I carved their logo into my family’s TV screen during the initial airing of Kiss Meets the Phantom of the Park in 1978 (grounded for a month, had to buy a new TV with allowance money), but even I bailed in ‘79 when Highway to Hell came out. Even at ten years old, it was clear to me that AC/DC was authentic rock’n’roll and Kiss was cheeseball pop-metal. But even if I was no longer wearing the gold(plated) Kiss necklace I ordered from an ad in a Power Man comic, I was still as shocked and dismayed as any other 70’s Kiss-kid when they booted Ace in 1982 and replaced him with Vinnie Vincent. Sure, by all accounts Ace was a nightmare to work with, what with all the boozing and the ego and the Nazi outfits, and if you were Paul or Gene you’d wanna do the exact same thing, but the truth of the matter is, it just wasn’t right. Listen, only dimwits revel in the misplaced notion that success always equates with financial gain. If you’re not thinking this through, it might look like things worked out. But they didn’t. Here’s the usual argument: “If it was such a bad idea to get rid of Ace, how do you explain the fact that they still played arenas, man? Lick It Up was a platinum album, dude!” Sure it was. But did it do anything for your soul? Or for Vinnie Vincent’s?

Rock’n’roll is not a benevolent force. It never was. It is the victory chant of warrior souls, and when you anger the rock’n’roll gods, they will take revenge. Ace was never meant to leave Kiss, neither was Peter, that’s why Gene and Paul are desperate enough to have proxies in their band right now. They are clearly trying to appease the Gods of Thunder with cheap imitations. But it will never be the same, and neither will you or I or Vinnie Vincent. Kiss was four men-made-demigods who proved that rock had magical, mystical, world-shaking properties, and that spell was broken as soon as Paul painted a fucking Ankh on Vinnie Vincent’s face. And he’s still suffering because of it.

Vinnie did time for a few years as not-Ace. He was there when they decided to wipe off the kabuki make-up and dress like adults (if blouses and pleather pants and wrestling belts could be counted as adult clothes, which they kinda did in the mid 80s) to prove that they were just men, not immortals. As if that’s what we needed. But Vinnie could not handle leaving Olympus. Having tasted the forbidden fruit of forever, he could not adjust to a pedestrian life on Earth. His guitar solos in Kiss shows got longer and longer. He was trying to achieve propulsion, lift-off. He wanted so desperately to get back to the stars and to unbreak his shattered, savage heart. And when they saw this, Gene and Paul once again slayed the guitar god they created, and threw his butchered remains to wolves.

But Vinnie Vincent was not done. He grabbed a future member of Slaughter and put him through a torturous recording process to create the thoroughly excessive and really quite-mad Vinnie Vincent Invasion album in 1986. While it has all the trappings of your typical mid 80s party metal, it is, in actuality, a collection of hymns. It is as devotional as that gospel record Elvis made where he was crying on the cover, only it’s not about Jesus, it’s about Vinnie’s abiding allegiance to the profane gods of rock’n’roll, even to the two dicks that threw him out of Kiss.

The band was unraveling even while the record was being made, with everyone but Vincent well aware that they were flying too close to the sun. But it doesn’t matter. The rest of his career has been a slow and devastating descent into utter despondency – an alarming 2014 Rolling Stone article on him basically painted a picture of a missing in action and possibly deranged recluse who had lost it as badly as Col Kurtz at the end of Apocalypse Now – but in 1986 Vinnie Vincent made his last stand, and it was glorious. It was fucking perfect, man. And if the gods of rock’n’roll are too stupid to see that, than I don’t even know what we’re doing here.

Next week: Who so fly up in the sky?