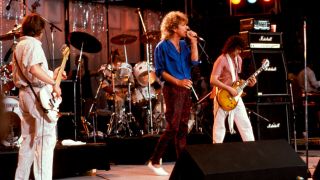 I know the wheels are falling off from early on in the set. I can’t hear Robert clearly from where I’m sat, but I can hear enough to know that he’s not on top of his game. Ditto Jimmy. I don’t remember playing Rock And Roll, but obviously I did. But I do remember an awful lot of time where I can hear what Robert decries as ‘knitting’: fancy drumming. And if you can find the footage (the Zeppelin camp have done their best to scrub it from the history books), you can see me miming, playing the air, getting out of the way lest there be a trainwreck. If I’d known it was to be a two-drummer band, I would have removed myself from proceedings long before I got anywhere near Philadelphia.

Onstage I don’t take my eyes off Tony Thompson. I’m glued to him. I’m having to follow – he’s taking the heavy-handed lead and has opted to ignore all my advice. Putting myself in his shoes, he’s probably thinking, “This is the beginning of a new career. John Bonham isn’t around any more. They’re gonna want someone. This could be the start of a Led Zeppelin reunion. And I don’t need this English fuck in my way.”

I’m not judging him, god rest his soul. Thompson was a fantastic drummer. but it was very uncomfortable, and if I could have left that stage, I would have left, halfway through Stairway... if not earlier. But imagine the coverage of that? Walking off during The Second Coming? Who the fuck does Collins think he is? Geldof really would have had something to swear about.

After what seems like an eternity, we finish. I’m thinking, ‘My god, that was awful. The sooner this is over, the better.”

There’s one more moment of horror. backstage, MTV VJ Alan Hunter is waiting to interview Led Zeppelin. The sweat still damp on our brows, the bad taste still ripe in my mouth, we gather outside the caravan of doom. Back in the studio, he’s teed up the interview with the words: “On a day for reunions, probably the most anticipated is the Led Zeppelin reunion. Now right here, an interview with the reunited members…”

Hunter starts asking questions, and it’s quickly obvious that nobody is taking him seriously. Robert and Jimmy are being difficult, giving vague, cocky answers to straight questions; John Paul Jones is still quieter than a church mouse. I feel sorry for Hunter. He’s live on air, a worldwide audience is waiting with bated breath, and these guys are making him look like an idiot.

In a shutting stable door after the horse has bolted style, Led Zeppelin won’t let the performance be included on the official Live Aid DVD. Because, of course, they were ashamed of it. And I find that I am usually the one blamed for it. It couldn’t possibly be the holy Led Zep who were at fault. It was that geezer who came over on Concorde who wasn’t rehearsed. He was the culprit. That show-off.

Phil Collins’ autobiography, Not Dead Yet, is out now on Penguin Books.