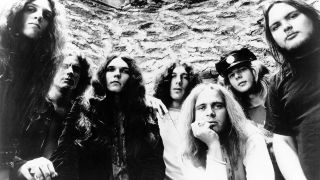 The story behind the song: Sweet Home Alabama by Lynyrd Skynyrd

New York’s Radio City, 1994. It’s the annual MTV shindig, and The Leningrad Cowboys, a bunch of outrageously bequiffed Finnish rockers, are playing before a worldwide TV audience of some 250 million. They’re backed by the 70-strong Red Army Choir, a military ensemble originally formed as a Bolshevik propaganda tool in pre-war Russia. The song they’re playing is Lynyrd Skynyrd’s Sweet Home Alabama. They say great songs travel. And sometimes they veer way off the map.

In September 2007, Governor Bob Riley officially declared Sweet Home Alabama as the promotional tag-line for Alabama state tourism. “It’s one the finest feelgood tunes of all time,” says its co-writer and former Lynyrd Skynyrd guitarist Ed King. “It picks you up when you’re feelin’ blue. The state of Alabama should’ve been using it long ago.”

Yet the song is anything but the cuddly picture of ‘authentic’ southern life that the suits would have you believe. It was actually written in the summer of 1973, partly as an indignant rebuke to Neil Young for a couple of his songs that had irked Skynyrd’s fearsome leader and lyricist, Ronnie Van Zant. Young’s Southern Man and Alabama had attacked the perceived bigotry of the south, with lyrics such as ‘crosses burning fast’ and ‘weight on your shoulders’. Van Zant was having none of it. “We thought Neil was shooting all the ducks in order to kill one or two,” he told Rolling Stone. “We’re southern rebels, but more than that we know the difference between right and wrong.”

Skynyrd were in fact vociferous in their disdain of then Governor George Wallace, a staunch segregationist. The sweeping assumption that all southerners were reactionary rednecks was something they were at pains to dispel (in Sweet Home… after the line: ‘In Birmingham they love the Governor’ Van Zant is heard saying “Boo boo boo!”). As for Young, Van Zant side-swiped him in typically pugnacious fashion: ‘Well, I heard Mister Young sing about her/Well I heard ol’ Neil put her down/Well I hope Neil Young will remember/A southern man don’t need him around anyhow’.

Gary Rossington, the only surviving original member in the current Skynyrd line-up, is keen to play down any talk of a Neil Young stand-off. “We all loved Neil,” he says today. “Ronnie used to wear Neil Young T-shirts all the time. Those lines about Southern Man were almost like a play on words. We didn’t know that song would be so big, or turn into such a big deal with Neil Young fans.”

What really propels Sweet Home Alabama is its burning guitar riff. Ed King had become intrigued by a guitar rhythm that Rossington had been tinkering with in the studio. “Gary was playing a pattern that you can hear behind the verses,” King says. “I put my guitar part on top of his as a counterpoint. But Gary’s part was the catalyst that started the ball rolling.”

King says the song took just half-an-hour to write, but the solos had an altogether more mystic origin: “I used to sleep with my guitar next to the bed. The night after we wrote Sweet Home Alabama I had a dream in which I played both the short and long solos. I immediately woke up, got the guitar and started playing what I’d seen in the dream. At rehearsal the next day I just plugged the solos into the spots where we had rehearsed them and they fit perfectly.”

Producer Al Kooper had his reservations, though. “Four days later, in the studio,” King continues, “Al told me he couldn’t use the solos because I had played them in the wrong key. But the guys in the band, being from the south and believing in superstition and dreams, told Kooper the solos needed to stay as I’d played them. Though they were overdubs, I’d recorded them both on the first take anyway with no mistakes. Kooper says he’s grown to like the solos since.”

Once Van Zant had added the lyrics, Skynyrd had a ready-made Confederate classic.

“Ronnie was one of the most gifted lyricists I ever knew,” keyboard player Billy Powell told Classic Rock in one of his very last interviews. “He had this ability to immediately write lyrics to each idea of every song. Then he’d memorise it; I never saw him write anything down.”

King was similarly astonished: “It was always in his head. I asked him once how he remembered the lyrics and he told me he just put the syllables together that fit into the groove of the music. And if the band lost the groove the next day, the song would be lost. That only happened once.”

Rossington: “Ronnie’s lyrics could be very profound. He was all about the working-class man, the everyday guy in the street. He had a great way with a simple story, a song you could relate to.”

Skynyrd’s impassioned defence of the south even caught the ear of Neil Young. “Shit, I think Sweet Home Alabama is a great song,” he once said. “I’ve actually performed it live a couple of times myself.”

When Skynyrd released Sweet Home Alabama in 1974, it tore into the US Top 10. This was their first and biggest US hit single. For a band who had begun in the late 60s it was, says Powell, “like overnight success. We felt like we’d finally made it. That was what we’d been striving for. We never cared that much about being tagged as a ‘southern rock’ band. Our music was unique. Even though some of it was straightforward, Sweet Home… was in a class of its own.”