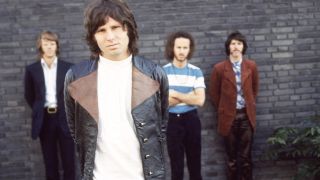 Frank Lisciandro went to the UCLA film school at the same time as Jim Morrison. Lisciandro knew Jim Morrison for six years. He saw The Doors in New York, and he caught them in their pomp on the Sunset Strip. He worked as editor on Morrison’s movie HWY: An American Pastoral, and co-directed the concert film Feast of Friends. In his book – Jim Morrison: Friends Gathered Together – he collates thirteen in-depth interviews with some of Morrison’s less famous friends: manager Bill Siddons, and his wife, road manager Vince Treanor, close friends like Babe Hill, and Morrison’s girlfriend Eva Gardonyi amongst them, each offering a different perspective on the Lizard King.

Here, we pick out the 15 most curious facts the book uncovers about Jim Morrison.

He coulda been killed by his asthma

Morrison suffered from asthma and took a prescribed drug called Marax, via an inhaler, which has subsequently been banned in the USA since it was decided that taking it in conjunction with alcohol could result in death. Pamela Courson told Gardonyi that Jim’s asthma “was somehow connected with his heart. Rheumatic heart? Maybe. That’s what the doctor was saying.”

He was a bit of a lech

Jim’s favourite hang out was a go-go club called The Phone Booth, where he and pal Tom Baker liked to chat to the strippers and lift up their skirts. Girlfriend Eva used to tag along to help pick up girls: “Tom and Jim would lift their skirts and do something silly and they would be mirthful about it and laugh and slap each other’s back a couple of times and then go on to another place to get a couple of drinks.”

He pretended to like world music to get girls

When he lived with Hungarian artist Eva Gardonyi from late 1970 to March 1971, Jim enjoyed listening to her ethnic folk music albums from Eastern Europe and Africa. Jim liked Eva to dress up in black underwear and garter belts and pretend to be a stripper. We’ve all been there.

Even if he’d survived Paris, The Doors wouldn’t have recorded again

Would The Doors have recorded after LA Woman? Not according to Eva. “He wasn’t on good terms with any of them. And he was deeply disappointed with all of them.”

Jim had a Ford Mustang nicknamed the ‘Blue Lady’. He enjoyed freaking out fellow passengers, especially the one in what he called “the death seat”, by driving the wrong way down alleyways at top speed. Babe Hill recalls him wrecking the Blue Lady by driving into the curb. “We were right in the back of the Beverly Hills Police Department. They called a tow truck and a cab. The undercarriage was wiped out. I was just holding on, saying, “Here we go, we’re going to die.”

Asked what he thought of Led Zeppelin, Morrison replied, “Tell the truth I don’t listen to rock and roll so I’ve never heard them. Normally I listen to classical music, or Peggy Lee, Frank Sinatra and Elvis Presley.” His favourite blues musician was Jimmy Reed, especially the song Baby What You Want Me to Do.

He wasn’t drunk – he was, like, ‘manifesting the phenomenon’ maaan

Morrison fell off stage at the Shrine Auditorium in December 1967. Beforehand Jim told the band, “I’m going to get as drunk as I can possibly get and then I won’t be responsible. It’ll just be the phenomenon manifesting itself through me while I’m blotto.”

He had “a beautiful throat”

Says Babe Hill (Jim’s closest friend and confidante 1969-71. He collaborated on both of Jim’s film projects, Feast of Friends and HWY and could match Jim at the bar): “Jim had the most beautiful throat I’ve ever seen. It must have been from all the singing and shouting he did. He had a big neck and a beautifully developed throat.

He was once rescued by some nuns

Morrison didn’t make it on stage when The Doors played in Amsterdam on their 1968 European tour. Or rather he did, but only during the Jefferson Airplane’s set. Canned Heat’s singer Bob Hite gave him a lump of hash, which he swallowed. He then passed out. He was rushed to a hospital run by nuns, a source of embarrassment when he came round. Jim must have thought he’d died and gone to heaven. Babe Hill says: “Jim told a funny story about that because these nuns knew what he had done and why he was in there. They’re in there changing his linen and not allowing him any privacy.”

Jim did bars; he hated parties

After The Doors played the Hollywood Bowl (July 5 1968) Jim spent the night at his usual flop house, the Alta Cienega Motel, opposite the Doors office on La Cienega Blvd, rather than attend the party or book into the Chateau Marmont. The motel manager Eddy, greeted him by saying, “You do good tonight? You big star? People like you?”

On both occasions that Morrison heard about the deaths of Janis Joplin and Jimi Hendrix (in 1970) he was on acid. Although he wasn’t partial to marijuana or PCP he certainly smoked plenty. Contrary to popular belief he also took a lot of cocaine from 1969 onwards. He was good friends with a coke dealer called Violet, aka “The Cocaine Queen.”

He had a dog called Thor

Jim and long-term girlfriend had a dog Sage who outlived both of them. When he went to Paris in 1971 Morrison Fed Ex’d cash back for the dog’s wellbeing. He was often photographed with Sage, as well as two other dogs called Stoner and Thor.

He freaked out in Jamaica

After the Miami concert, March 1 1969, the Doors hid out in Jamaica, with Jim alone in a big house on the island, smoking powerful weed with his housekeeper, getting more and more paranoid and vulnerable. According to Eva Gardonyi, “It affected him in the weirdest way, because he started like hallucinating that people are going to kill him… That was a very fearful night, a very fearful experience for him and it got in touch with his relationship with blacks, because he said he didn’t trust them, he didn’t understand them. He said, ‘I was like a white boy not understanding my place in this thing.’”

He wasn’t big on festivals

According to Doors publicist Leon Barnard Jim described Woodstock to Tony Thomas from Canadian Broadcasting (in May of 1970) as “‘Half-a-million people wallowing in limbo.’ He didn’t see it as a love festival at all.”

He wanted to go a bit classical

Morrison wanted to call the 1970 Absolutely Live album, Lions In The Street. He also wanted to release a poetry album he recorded in 1969 on his birthday and call that The Rise and Fall of James Phoenix. Leon Barnard says he backed down about Lions in the Street because the other Doors didn’t like it and he said, “It’s all for one and one for all, and after all, Absolutely Live is an alliterative and I kind of like that.” He wanted The Rise and Fall of James Phoenix to be backed up by a Philharmonic Orchestra. Barnard says, “He wanted something classical; it wasn’t to be rock’n’roll. I don’t know why he chose that title.”