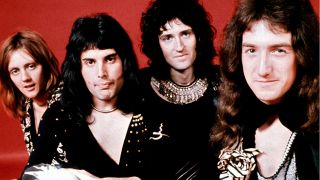 Queen songs, much like their albums, are the sorts of things which should be celebrated as much as analysed. There's a great scene in the Bohemian Rhapsody movie where Freddie Mercury and the rest of the Queen gang come up with We Will Rock You and We Are The Champions. The idea, they say, is to write songs that songs that the audience can sing back at them; to make their audience part of the song. It's a genius, simple idea, but it clearly worked. It makes you wonder why more bands don't approach songwriting that way.

To this day, Queen have a bond with their audience that remains strong. For every naysayer who bemoans they work they do with Adam Lambert, there's another ten who queue up to defend the band: it's their legacy, and they can do whatever the hell they like. Most importantly, it's their songs.

Ahh yes, the songs. All 189 of them. From the Baroque-tinged hard rock that formed the bedrock of Queen's sound, to their explorations in funk, prog, opera and pretty well everything in between, when it came to their creativity nothing was off limits. That such an eclectic range of influences and passions were put through the Queen grinder and came out sounding like no other band is just one of the factors that have made them such an enduring and widely-loved proposition.

With a fanbase as dedicated and engaged as Queen's, we knew exactly where to turn when it came to pulling together the definitive ranking of Queen's best songs. We put each of the band's recorded songs into a giant poll, you voted for them in your thousands (we had close to 50,000 votes – see what we mean about Queen fans?), and we put the results into a vast spreadsheet and performed some calculations. We also called upon some familiar faces to hear about the Queen songs that really make them tick.

Freddie Mercury’s nimble whip though this hard rock tongue-twister presents Queen at their most ludicrously camp. The song itself is a thrilling ride, with references to cocaine, Star Wars, Watergate and John Wayne, and a solo played on bicycle bells. Musically, it's a pretty good representation of the album that housed it: bonkers, scattershot, but above all, genius.

Having decamped to Switzerland to work on Jazz, this song's inspiration was found from the Tour de France 1978 passing through Montreux, the location of Queen's favoured Mountain Studios. The inspiration for the video, featuring dozens of naked women riding cycles around Wimbledon Stadium was equally clear, and predictably resulted in its being banned in a number of countries. Which, of course, is probably exactly what Queen wanted in the first place.

“That Queen record Jazz had some weird shit on it," Mike Patton told us in 2006. "If you listen to how dense Bicycle Race is, it sounds more dense, more deep, more rich than these ProTools systems that you can record 96 fucking tracks on. So that really impressed me – not to mention the music – but, how the fuck did they do it?”

Inspired by a Richard Dadd painting of the same name, this Queen II album track is a good example of how Mercury's natural creativity could be boosted by a bit of deft studio know-how. "I did a lot of research on it and it inspired me to write a song about the painting, depicting what I thought I saw in it," he told Radio One in 1977. "It was just because I'd come through art college and I basically like the artist and I like the painting, so I thought I'd like to write a song about it."

All sounds simple enough – though of course, Queen being Queen, it was anything but. Complex enough to stop it ever being performed live, the track comes to life with its layered instrumentals and whimsical tales of fairy expeditions. Dubbed by Mercury as Queen's "biggest studio experiment", its use of multi-tracked harpsichord, piano, castanets and Hendrix-inspired panning has seen it held up as a milestone in Mercury's songwriting career.

Allegedly John Deacon's favourite Queen song and begrudged by Roger Taylor for being "very hard on the right wrist", this Another One Bites The Dust B-side has become something of a cult favourite among Queen fans over the years. Penned by Brian May, its minimalist disco-funk leanings are easier to understand when you learn it was the product of a drunken jam session which eventually made it onto tape.

"Roger and John swing convincingly, locking into an infectious groove that they adhere to throughout," writes Georg Purvis in Queen: Complete Works. "[This allows] Brian full rein on some dirty guitar licks while Freddie sings the minimal lyrics, long rumoured to be about his hard partying ways."

The second single to be released from Queen's eponymous debut, this song served as a superbly dramatic vehicle for Queen’s harmony vocals, Brian May’s guitar and the band’s ability to tell stories with their music. This may have been Queen taking baby steps, but the sound of their future is all here: silks, satins, elaborate feathercuts, cod-Zeppelin riffs, wannabe Beach Boys harmonies and a mad gospel breakdown.

“The first song I heard was Liar," Paul Stanley told us of this song. "You only get one chance to make a first impression, and that was the song that made it for me. Obviously, they grew into something very different, but I remember hearing that song, and as far as the personality and the sonics of it, it was very impressive to me. Later on, it became something else which was equally impressive for other reasons – the diversity and the ability of everybody in that band to write a No.1 song is unmatched.”

This camp and quirky slice of whimsy from the pen of Mr Mercury is light-hearted as hell, but proof of the band’s in-depth talent. Queen's taste for the overblown is given space to luxuriate here, the pointed grandeur of this song leading Taylor to crown it a spiritual successor to Bohemian Rhapsody.

A waltz that revels in the protagonist's high life and riches, this song was actually written about their then manager John Reid, with Mercury telling comedian and DJ Kenny Everett "It's very out of the Queen format, really, and we thought we'd like to do that on every album. I think I went a bit mad on this one. But it's turned out alright I think, it makes people laugh sometimes."

After a first major hit with a pop song, Killer Queen, the follow-up single was a reaffirmation of the band’s heavy rock credentials. Now I’m Here was built around one of Brian May’s greatest riffs, and for such a kick-ass song, it was a surprisingly big hit, reaching number 11 on the UK chart.

Written by May while he was laid up in hospital after returning from America – understandably keen to rejoin his bandmates who had started work on their next album without him – work began on this track while May was convalescing. Lyrically, it reflected the disconnect between touring the US with Mott The Hoople and his living in a pokey bedsit in West London with his girlfriend. “It came out quite easily,” said the guitarist. “Where I’d been wrestling with it before without getting anywhere.”

The raucous hard rock of Now I’m Here made it a great live favourite. “It’s a song that I think they opened with when I saw them circa the Sheer Heart Attack album," Porcupine Tree's Richard Barbieri told us. "Although Freddie camped it up, and much of their material was delicate, when Queen rocked out they easily rivalled Zeppelin, Sabbath and Purple. It was one of the best gigs I’ve ever seen."

Roger Taylor didn’t have his own hit song until Radio Ga Ga in 1984, but he certainly made a few quid out of the one he wrote for A Night At The Opera. Famously, when Bohemian Rhapsody was released as a single, I’m In Love With My Car was the B-side, earning Taylor an equal split of the royalties with Mercury: the source of some friction between the two.

For all that, I’m In Love With My Car was a great song in its own right. It was inspired by a Queen roadie who considered his Triumph sports car the love of his life, hence the note in the album credits: ‘Dedicated to Jonathan Harris, boy racer to the end.’ Taylor’s lyrics included much joking on this theme: 'Told my girl I had to forget her/Rather buy me a new carburettor.'

Indeed, Brian May had dismissed the song as a joke when Taylor first played a demo for him. But the finished article was so good – a supercharged rock’n’roll number, played the way only Queen could, with Taylor the star of the show – that I’m In Love With My Car turned into a genuine Queen anthem.

A Day At The Races' piano-driven finale, this track was written by May as a gesture towards the band's dedicated Japanese fanbase. Having been warmly welcomed during their first visit to the country, May called the song "The result of feeling 'untimely ripped' from our lovely Japanese fans. I had never experienced anything like the love that was showered upon us when we were a young rock group in Japan. So suddenly, I felt I wanted to say on behalf of Queen that I missed them and we would not forget".

With the lyrics translated by Chika Kujiraoka, Mercury's sweetly evocative vocals made this a treasured fan favourite all over the globe.

The furious Stone Cold Crazy – an influence on the future members of Metallica, and hence a cornerstone of the thrash metal movement – is as close to true heavy metal as Queen ever came.

While Mercury’s vocal on the 1974 original (the only Queen song credited to the whole band until the late ‘80s) was rather more playful and camp than Hetfield’s, that ripping machine-gun riff and speedy headbanging tempo still mark this out as an early metal classic.

“Man, what a chorus," said Whitesnake's Reb Beach of the track. "I love that song because the whole band rocks, then everything stops and Freddie uses that amazing voice of his to express a really wordy verse. Only he could have made that sound the way it did.”

Originally a Freddie Mercury solo track recorded during one of Queen's creative hiatuses, his disco-tastic version was given the rock treatment by May, Deacon and Taylor on Queen's final album, completed and released following Mercury's death.

Its disco origins mean it remains one of Queen's poppiest tracks, and its place as one of Queen's enduring favourites is perhaps made all the more curious when you learn Mercury considered it so throwaway that he nearly junked it from his genre-bending solo album Mr Bad Guy before it was released. Still, its heartfelt lyric and irresistible beat has made it a treasured fan favourite.