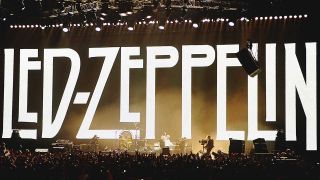 Good Times, Bad Times
Ramble On
Black Dog
In My Time Of Dying
For Your Life
Trampled Under Foot
Nobody’s Fault But Mine
No Quarter
Since I’ve Been Loving You
Dazed And Confused
Stairway To Heaven
The Song Remains The Same
Misty Mountain Hop
Kashmir

In the days before The Gig, Classic Rock is interviewed by Sky News, Canadian television, the Los Angeles Times. They all ask the same question: why is everyone so excited about the return of Led Zeppelin? Classic Rock whitters on about how Zeppelin masterfully mixed the blues with folk and rock and soul and Eastern music, about how they’re up there with The Beatles and the Rolling Stones, about how – short of Jimi Hendrix coming back from the dead – this is as big as it gets.

You can see it in the guest list. Within spitting-distance of Classic Rock – and among the people, it’s safe to say, who never won their tickets via the ballot – are Kate and Naomi, Noel and Liam, Marilyn Manson, Joe Elliott, Dave Mustaine, Juliette Lewis and, like, that fella from Crowded House. Somewhere in the building, Paul McCartney, Mick Jagger, Priscilla Presley and Lulu are fighting over the vol au vents. Saxon at Butlins it most definitely isn’t.

In no other industry could you get away with even asking that question. (Next time you’re interviewing someone for a job at your workplace, trying telling unsuccessful candidates: “Well, you’ve got the talent – in fact if anything you’re over-qualified – but I’m afraid you’re too old for us. If you were in your 20s, the job would be yours…” Just see how long it takes before your arse is dragged through the courts.)

Zeppelin answer the question better than we ever could. A 70s TV screen appears out of the darkness and an American news report reminds us that the band out-sold The Beatles. Seconds later the defiant opening chords of Good Times, Bad Times explode from the stage.

As an opener, it’s perfect: not just the first song on their first album, but a short, ballsy, feedback-strewn statement of intent, Plant kicking his mic stand into the air, Page suited and booted, legs akimbo – still the ultimate guitar hero.

There was speculation that Zep would ‘do a Pink Floyd’ and lean on a spectacular light show to carry the show; they do exactly the very opposite. The house lights stay on most of the night (annoyingly so, to anyone who wants to get lost in the darkness). The stage is bathed in white light, the band gathered around the drum riser for much of the gig – not Plant on a pedestal at the front, not Page in a spotlight every time he does a solo.

The message is clear: this isn’t some bullshit showbiz act. This isn’t the Stones and their travelling jukebox. This is a band. Led fucking Zeppelin. Three old guys (and their sorcerers’ apprentice), sure, but three old guys who can still perform with dignity.

Ramble On serves notice that there’s going to be some surprises: by our reckoning it’s never been played live in its entirety before and the fact that Plant has in the past admitted embarrassment at its Tolkien-referencing lyrics suggests that, far from being the reluctant party, the singer has thrown himself into this and is giving it his all.

Black Dog gets the crowd singing. Then, just when you think it’s going to be all crowd pleasers, there’s worthy epic In My Time Of Dying, followed by the live debut of For Your Life, from Presence. (Followed immediately by the sound of around 19,000 people turning to each other and saying under their breath: “Which one is this again?”)

Trampled Under Foot gets the funk out and the supermodels dancing. Plant introduces Nobody’s Fault But Mine with references to the Staple Singers' and Blind Willie Johnson versions and joking that “We musta first heard this in a church in Mississippi in 1932…”

His harmonica solo is suitably ear-rattling, and he finishes by spinning the harp high in the air and catching it. For No Quarter, dry ice floods the stage as John Paul Jones lays on the atmospherics and Jimmy Page hits the wah-wah. On Dazed And Confused Page starts pulling his hands off the strings like the guitar is stinging him, before getting the violin bow out for some alchemy/whale song/bullshit (depending on how stoned you are).

The video screens get more and more trippy, mashing up the spectacle right before our eyes. Next thing you know he’s holding a double-necked SG and we’re climbing a Stairway To Heaven. The notes that would get you kicked out of guitar shops across the country ring out, distortion saving the song from the recorded version’s twee excesses. Plant sings ‘And the forests will echo with laughter’, and the stadium echoes instead with his ad lib from The Song Remains The Same: “Does anybody remember laughter?”

The solo – you know, the one that’s been voted the greatest guitar solo of all time – is great: not slavishly recreating the original, but referencing it enough to acknowledge the respect it’s held in. “Hey Ahmet, we did it!” Plant shouts at the end (because they cocked up Stairway at the Atlantic records bash in 1988?). Some people sit for The Song Remains The Same – one of the night’s few unremarkable moments – but they’re not down for long.

“There are people from 50 countries here tonight,” says Plant. “This is the 51st country…” And then Kashmir starts. At once everyone’s on their feet. We’re plunged into welcome darkness as lights strafe the crowd and grown men are (literally) seen to weep.

You can keep yer Grand Canyon and yer Niagara Falls: this is the eighth wonder of the world. Is it the Zeppelin of old? Of course not. These days there are Thermos flasks and tea mugs on the right-hand side of the drum riser. (On the left, are Jimmy’s bottles of alcohol-free Kaliber lager).

These days, JPJ needs just one keyboard, not banks of them. These days half of the audience seem to view the entire gig through their mobile phones (on the rare occasions that the house lights go off, the floor of the arena twinkles like a star-filled sky). And, these days, the guy on the drums is the son of the guy who used to be on drums. Ironically, he’s the only one with no hair.

“Jason was fucking great,” says Dave Grohl, who knows about these things, in an email to photographer Ross Halfin the following day. “Face it: he had people like me, Chad Smith and [Black Crowes drummer] Steve Gorman watching his every move, all night long, and afterwards we all agreed that he played great.”

By the end of the show, Bonham Jr isn’t just copying his father’s parts, but also adding his own fills, flailing away, knocking hell out of the kit. When they take a final bow, Jason gets on his knees before them in ‘we’re not worthy pose’ then leaves the stage, clearly emotional, rubbing his head like someone who’s just had his mind blown.

Considering that we have too, and we’re just watching, you can only imagine how he must feel. Tellingly, there are no emotional goodbyes, no “Thanks for coming to see us one last time” speeches, just props to Ahmet and the sight of The World’s Greatest Rock Band reborn walking off the stage.

There’s an old saying: ‘Buy land, because God’s not making any more of it’. He’s not making bands like this any more, either.