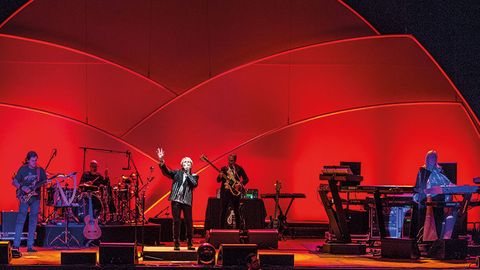 It’s exactly five minutes to stage time and there’s chaos in the bowels of the Orpheum Theatre in downtown Los Angeles. Rick Wakeman has snatched a walkie-talkie from his exasperated tour manager and is broadcasting misleading information. “Nine minutes to stage time,” he warns, his voice crackling through the backstage area as his victim’s face sags. “Twelve minutes to stage time,” he adds, confusing matters further. “Stage time next Thursday,” is his final update before he’s ushered away for an appointment with Classic Rock’s photographer, joining the other four members of ARW for a session that lasts less than two minutes. Things are running late.

It’s already been a busy day for Wakeman and Jon Anderson. Two hours earlier, following soundcheck (a bright Rhythm Of Love followed by a wonky stab at the theme from The Muppet Show), both men are huddled together at the front of the stage, sharing a mic and tackling questions from those who’ve stumped up several hundred dollars for VIP tickets.

Trevor Rabin is under the weather and absent, seeing a doctor (Wakeman, of course, jokes that he’s undergoing a vasectomy), but no one seems to mind. For the most part they’re simply keen to establish a connection between themselves and the band… and the band they used to be. One punter says he first saw Yes in Tulsa in 1973, another at a festival in 1970. Most have followed Yes since they were teenagers, and – surprise, surprise – a few of them are teenagers.

There are questions about Stravinsky, and about the special pleasures offered by long instrumentals, but most just want to say thank you. Then there’s a meet-and-greet, the pair sitting at a table in the lobby as dozens of fans patiently wait their turn for a photo, or an autograph, or to say thanks again. Being in a band didn’t used to involve this much work.

“I really enjoy it,” says Wakeman, relaxing in his hotel lobby the following morning. “My late father said to me once that the people walking towards you always have a story to tell, and the chances are that it’s more interesting than yours. Some of their stories are gobsmacking, and I’m very aware that the hard-core who come to the meet-and-greets are our lifeblood. They enable us to do what we do, and it’s lovely. Over the years a lot of these people have become close friends.”

It’s some connection. The roar that greets ARW as they hit the stage is laced with as much expectation as it is affection, but there’s something else: relief. The audience is clearly delighted to have Jon Anderson back on the stage, singing Yes songs in a five-piece line‑up that sounds… well, a lot like Yes. To my immediate left, a fan turns to me and punches my arm in sheer elation. “It’s been too long, much too long,” he says, close to tears. “I hate that other guy.”

He’s referring to Jon Davison, currently fronting Yes, and a skilled musician who offers a reasonable facsimile of the Anderson vocal, but whose presence ensures there will always be a faint whiff of tribute act about the Yes line-up with the rights to that name. That’s not the case with ARW.

“One of the things we were very aware of – and we talked about this a lot – was that we never wanted this band to feed off nostalgia,” says Wakeman. “There’s a lot of artists who are getting on in years, and when they perform, the applause is for who they are and what they’ve done, not for the particular show they’re doing. There’s an unbelievable amount of preparation that’s gone into this. Jon and I started talking about this in 2009 or 2010, and we all agreed that if it wasn’t as good as we wanted it to be, there was no point in trying to do it.”

Both men pepper their conversation with references to Yes, and they’re referring to ARW when they do. Perhaps it’s old habits dying hard, but it feels like more than that, as if they’re determined to reclaim Yes’s music as an evolving concept, shifting it forward, not content to settle for stasis. A perfect example is a song they don’t play. On the first night of the tour in Orlando the band encored with the classic Starship Trooper, surely a shoo-in for any set-list compiler, but it hasn’t been played since.

“We added a few little things,” explains Wakeman, “and we all agreed that there wasn’t much more we could do with it. We couldn’t develop it in the way we had with Heart Of The Sunrise and And You And I and Roundabout and Lift Me Up and Rhythm of Love and Perpetual Change. It is what it is, and for the moment it’s had its day.”

“It’s like a ritual,” says Anderson. “The fans get that we’re not here for anything but an advancement of what we believe Yes is, and what I believe Yes is. Yes music is all about being open to the adventure of music.”

Anyone reading this and expecting to hear Dixieland or bluegrass takes on Perpetual Change will be disappointed, and some of the tweaks may be cosmetic, but they’re not insignificant. Yes guitarist Steve Howe’s celebrated acoustic introduction to Roundabout has been ditched and replaced by volume-controlled Rabin electrics, while Awaken is the beneficiary of a whole new set of orchestrations.

“The music is littered with such changes,” says Wakeman. “If you isolated all the areas where we’ve made changes, it would be well into the hundreds, but it doesn’t take anything away from any of the pieces. They’ve evolved amazingly.”

“His idol is Chris,” Wakeman says. “He’s studied everything Chris has ever done and he’s taking it further. He was born in the wrong era. If he’d been born twenty years earlier he’d be a household name. I think he’s the finest bass player around.”

“Most of you are from the seventies, right?” On stage, Jon Anderson is enjoying himself. And he’s singing well. Really well. All the songs you thought might challenge a 72-year-old asthmatic – Heart Of The Sunrise, Awaken, I’ve Seen All Good People, the rest – simply don’t. His voice hits those sweet high notes without ever cracking, and you wonder what kind of crazy medicine allows this to happen.

“I use my fingers to reach certain notes,” he explains. “It’s a specialised idea from way back. Sometimes you can touch a certain part of your shoulder to kick a note out and make it really on-key. You just do it. It becomes a natural event when you’re working on stage, touching my hands and wrists. It’s part of my balance, and singing is a balancing act.”

It’s not just Anderson. The whole band are enjoying themselves. After Cinema’s, er, cinematic opening, an epic Perpetual Change finds Pomeroy and Wakeman engaged in casual conversation as they perform musical gymnastics. Meanwhile, Rabin is busy dismantling Steve Howe’s guitar parts and reimagining them with power and poise. He can do subtle, he can do simple, he can shred – his scalding solo on Hold On is an early highlight – and he wears a T-shirt with ‘rock’n’roll animal’ printed on the back. He really does.

Every song sounds like a celebration. Every song is uplifting. Lift Me Up. Changes. All of them. Rhythm Of Love sees Anderson and Pomeroy bouncing up and down in unison, both grinning wildly. Whether it’s from the early 70s or the mid-80s, everything soars and spirals and feels like it’s headed somewhere celestial. During And You And I, one audience member leaps from his box seat and dances wildly, arms clawing at the heavens, completely lost to the music.

After a giddy Long Distance Runaround it’s The Fish (Schindleria Praematurus), and Pomeroy’s tribute to Chris Squire. He sets up the familiar looped harmonic opening before walking to the front of the stage for the solo. And while he might be a different physical breed to his predecessor – Squire looked like he could casually flip his bass to the back of the hall, while Pomeroy sometimes appears to be wrestling a wheelbarrow – his moment in the spotlight is just right, a blur of fingers pitched somewhere between noble acclaim and new adventure. “An amazing bass player,” Anderson tells the audience. “There’s no one like him in the world.”

Despite all the obvious dexterity on show, there’s never a moment where it feels like the musicians are showboating. Everything played is performed with the express purpose of elevating the music and the moment, setting out to scale those transcendent peaks. And in the middle of it all stands a delighted Jon Anderson, singing as well as he’s ever sung, his hands weaving through the air, touching his fingers to hit the notes, mouthing words off-mic, lost in the thrall of the moment, looking like a man who has found the answer to just about any question you might care to ask. At one point he jokes about lacking energy, before spinning off to the wings to dance with his wife.

There’s a lovely performance of The Meeting (from 1989’s Anderson Bruford Wakeman Howe album), with Wakeman and Anderson alone on the stage, man versus piano, preceded by a story about the time Yes were beaten by an under-11 cricket team in Montserrat. And there’s an utterly majestic, 20-minute take on Awaken, with Anderson on hypnotic miniature harp, Rabin’s guitar alternately providing ambience and fury, and Wakeman casually switching keyboard parts around like a man who breathes symphonies in his sleep.

The set closes with Owner Of A Lonely Heart, as Molino vacates the drum stool to make way for Rabin’s son Ryan (drummer with indie-rock band Grouplove), who takes the best part of 30 seconds to look like he’s been in the band for years. Towards the climax, Wakeman dons a keytar and descends with Rabin Senior into the audience, torches lighting the pair’s path as they race up and down the aisles and into the lobby and back, all without missing a note or spilling anyone’s popcorn.

Bows are taken to thunderous applause before the band return for a jubilant romp through Roundabout, Pomeroy’s juddering bass driving the song onwards and most assuredly upwards towards delirium and a suitably ecstatic finale. The audience departs with Rick Wakeman’s recording of David Bowie’s Life On Mars? tinkling from the PA, and Trevor Rabin walks off stage and passes out. He’s later diagnosed with having a virus.

“This music is so ingrained in my consciousness,” Anderson says the following morning. “You’re riding on a wave of energy. Like And You And I last night, you think: ‘My God, this is a beautiful piece of music.’ It’s being played perfectly, and I’m singing on the top form in my life. It’s raising my consciousness on stage so I’m in this place of bliss, for sure.”

Wakeman has a simpler message. “We want to keep this together,” he says, clearly proud of what this band have already achieved, “because we think it’s got a serious future.”

Yes: The Real Story Behind Tales From Topographic Oceans