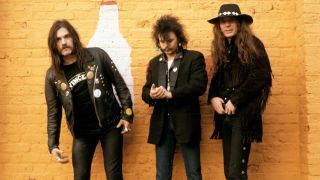 A hugely influential musician, former Motorhead drummer Phil ‘Philthy Animal’ Taylor’s famous double-bass introduction to Overkill once caused Metallica’s Lars Ulrich to remark: “When I first heard [Overkill, it] blew my head off”. Here, we celebrate that song, and nine other great moments.

By introducing the mighty double kick drum sound to rock’n’roll, Philthy Phil inadvertently spawned an entire genre of music. That whole D-Beat thing, so popular in punk rock, began here with the title track of their second album. We should rightly call it P-Beat.

The closing track on 1980’s Ace Of Spades album, and dedicated to Phil on the ‘Live In Toronto’ video of 1982, The Hammer pretty much describes his hooligan approach to drumming: Keith Moon meets Animal from The Muppets, on speed and Special Brew. He once played an entire tour with the drumstick gaffa-taped to his broken hand after punching a tour manager.

Kicking of with Taylor’s trademark beats, 1987’s Rock And Roll saw his very welcome return to Motorhead after a three year “holiday”. Perhaps not the best Motorhead album, but the best news for Motorhead fans worldwide. Rarely has a drummer been missed so much.

Co-written by then Hells Angels’ president Tramp, with whom Taylor was great friends, Iron Horse/Born To Lose (from Motorhead’s debut album) is the the sound of a gleaming Harley Davidson thundering along “an open highway, that don’t have no bends”. Righteous as fuck.

Yes, it’s an obvious choice, but just as Ace Of Spades was a landmark tune for Motörhead, so their appearance on The Young Ones was a landmark moment for an entire generation. Having returned from his “holiday” the brief glimpses of Taylor back behind the kit were almost as great as the show itself.

Included not so much for Phil’s drumming as for the fact that he appeared on the record sleeve with his broken neck in a cast having lost a game of let’s see who can fall down the stairs the best. The accident led to a growth on the back of his neck, which he affectionately referred to as “his knob.”

Beginning with a drum roll in which Philthy hits everything but the kitchen sink, this 1983 tune - and the Another Perfect Day album from whence it came - divided critics and fans alike, never fully appreciated until a few years later. Whale oil beef hooked, as Philthy’s t-shirt said.

Aside from Overkill, few song titles - or songs - exemplify Taylor’s wonderfully yobbish approach to drumming more than Over The Top. Lemmy says it all at the start of the song, and perhaps all that needs to be said: “Goodnight Phil”.