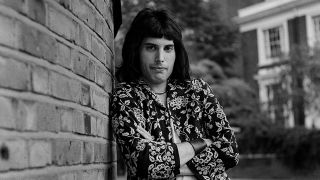 Freddie Mercury's teeth may have given him his distinctive smile, but when the Queen frontman died on November 24 1991, aged just 45, he took most of his secrets to the grave.

This notoriously private man left his mark on most people that met and knew him: from his fellow art students in the 1960s to his bandmates in Queen and other rock stars in the 70s and 80s. Now, with new Queen biopic Bohemian Rhapsody freshly released, interest in the formidable frontman has been renewed like never before.

So, here we present 10 lesser-known Freddie titbits to quench your thirst for Mercury knowledge.

1. He had more teeth than your average lead singer

Freddie’s distinctive grin was the result of having four extra teeth in the back of his mouth which pushed those at the front forward. He always refused to have his teeth fixed (see fifth entry below), fearing it would affect his vocal ability.

2. He started writing Bohemian Rhapsody when still a student

Friends from college in the late 60s recall Freddie endlessly playing and singing the opening line to Queen’s greatest hit on the school piano. “He called it ‘The Cowboy Song’,” remembers one. “But he could never get beyond ‘Mama, just killed a man…’” It would take him five years to finish the piece.

3. He worked as a life model in art school

As a student at Ealing art school in the 60s, Freddie was often skint. Desperate to buy a pair of Levi’s he worked as a model at an evening life drawing class. “We were given a towel to protect our modesty,” recalls a fellow ex-model. “But I often think of all those old ladies who drew pictures of a half-naked Freddie Mercury.”

4. He was David Bowie’s roadie

In April 1969 unknown singer-songwriter David Bowie played a lunchtime gig in the canteen at Ealing art school. Freddie helped carry Bowie’s amp and helped build a makeshift stage for him out of canteen tables. Mercury never mentioned their first encounter when he worked with Bowie years later.

5. He was responsible for the Sex Pistols

On December 1 1976, Queen were booked to appear on the TV show, Tonight With Bill Grundy, to plug their new album, A Day At The Races. The band cancelled as Mercury had his first dental appointment in 15 years (see first entry). Their replacement was the Sex Pistols. And we all know what happened next.

6. He got very bored during Brian May’s onstage guitar solos

Brian May’s guitar solo during Queen’s live show would sometimes exceed 10 minutes. During one particularly lengthy piece, Freddie, waiting in the wings declared, “For God’s sake, let’s go shopping, get me out of here!”

7. He had female nicknames for his friends and bandmates – except one

8. He once got Status Quo’s Francis Rossi in a headlock

The great Status Quo/Queen stand-off happened backstage at Live Aid. Mercury and Francis Rossi were messing around together when Francis made a slightly too cheeky comment regarding Freddie’s sexuality. Mercury responded by getting him in a grappling hold. “If he’d wanted to have me, he’d have had me,” admitted Rossi. “I couldn’t move.”

9. He sent a Christmas present to Elton John from beyond the grave

At Christmas 1991, a month after Mercury’s death, his friend Elton ‘Sharon’ John received a package wrapped in a pillowcase. It contained a painting by one of Elton’s favourite artists, Henry Scott Tuke, and a handwritten note: “Dear Sharon, thought you’d like this. Love Melina.”