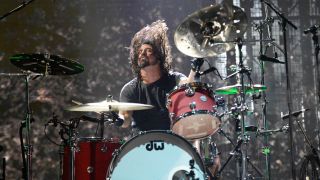 The rock world loves Dave Grohl, and he loves it right back. But how well do you know the man, the myth, the legend?

2. His first gig was The Jackson 5 at the Ohio State Fair. He was two.

3. When he was 13, he was introduced to punk by his cousin Tracy. She took him to see Naked Raygun at Chicago’s Cubby Bear.

4. When Dave was 13, he was in a covers band. Their most memorable show saw them playing the Rolling Stones’ Time Is On My Side to a nursing home crowd

5 He says Edgar Winter’s instrumental Frankenstein is the song that made him want to become a musician.

6. Dave’s first hero was Jim Craig, the 1980 American ice hockey team goalie from Worcester, Massachusetts. After the team beat Russia, he found the phone numbers of all the Jim Craigs in that area, phoned them up and congratulated them. Dave and the real Jim Craig met years later at a Winter Olympics.

7. P. Diddy’s All About The Benjamins was given two rock remixes by Dave Grohl in 1997.

8. The Grammy for There Is Nothing Left To Lose is used to keep Dave’s bedroom door open.

10. Grohl once made a cameo appearance on The X-Files in a 1996 episode called Pusher.

11. Dave is a fan of clay pigeon shooting.

13. The first instrument Dave learned to play was the trombone.

14. In school, Dave wanted to be a UFO investigation expert.

15. Warren, Ohio has honoured Dave twice. There’s a David Grohl Alley and a pair of 902lb drumsticks in the town centre in celebration of their most famous son.

16. Dave once harboured ambitions to be a helicopter pilot. “I’d take the storm windows off of our house and set them up in this little cage thing around me,” says the Foos man. “I’d sit and pretend I was in a helicopter.”

18. A life of crime started – and ended – when he was around 10 years old. “I stole some chewing tobacco, it was green apple-flavour Redman Chew,” he told the Melody Maker. “I went into our laundry room and started chewing it and got so violently ill that I never chewed tobacco again. I’m not much of a thief really.”

20. The first pressing of Foos’ 1999 album There Is Nothing Left To Lose came with a rub-on FF tattoo like the one on Dave’s neck. The album’s Australian release was issued in an outer sleeve with national swimming hero Michael Klim sporting one.

21. Dave and Nate met at a Thanksgiving house party, where a ouija board claimed a baby had been murdered in that same house. It later transpired that a Native American baby had in fact been killed there.

23. Dave and Nirvana bassist Krist Novoselic recorded a few demos after Nirvana finished, and almost struck out with their own group.

24. In 2000, Grohl was fined and banned from driving in Australia after being caught drunk in charge of a scooter. “I guess if there’s anything to learn here, it’s don’t drive after a few beers, even if you feel entirely capable like I did,” he said later.

26. In the late 80s, he was once an employee at a Tower Records shop in Washington, DC.

27. A big fan of the B-52s, Dave’s vocals on Wattershed are an imitation of the group’s Fred Schneider.

28. In March 1995, Dave appeared with Pearl Jam during three Australian dates, playing drums on their cover of the Dead Boys’ Sonic Reducer, Against The 70s and Neil Young’s Rockin’ In The Free World.

29. Verbana, a 1997 Foos support act, were given the honour of having Dave produce their debut album, Into The Pink.

30. Dave became friendly with the late David Bowie on the 1997 festival circuit and later played his 50th birthday party. He later contributed drums to a cover of Neil Young’s I’ve Been Waiting For You on 2002’s Heathen.

32. He once asked Andrew WK to support the group, after seeing a promo shot of him with a bloody nose. He also helped him get a recording contract, calling him ‘a true American hero’.

33. The frontman once had an unpleasant Channel crossing after taking acid. “I wound up running in circles for three hours, hallucinating that tiny dinosaurs were chewing everybody’s ankles,” says Dave. “That was fucked up.”

34. As a Christmas gift, Dave once recorded a song for his then-girlfriend, pressing and packaging it as a proper release. He gave the sole copy to her and then destroyed all the remaining tapes. We bet he’s kept a spare in the loft for a rainy day.

35. For their 2011 tour, the band issued their tour rider requests in the form of a colouring book.

36. Dave was once penpals with John Reis, aka Speedo of Rocket From The Crypt. The Foo Fighters took the band out on tour in 1998.

37. He recently described PSY’s Gangnam Style as “one of [his] favourite songs of the last decade”.

38. Having problems cooking asparagus? Just ask Dave. “You’ll know it’s ready when you pick it up and it looks like a limp penis,” he told Pop Smear.

39. Over two evenings in 2012, he reportedly left two $1000 tips for staff at the Smith & Wollensky bar at the Rittenhouse hotel in Philadelphia.

40. His favourite Dr. Seuss book is If I Ran The Rainforest.

41. He recorded the soundtrack to the 1997 film, Touch and duets with Veruca Salt’s Louise Post on two songs, including How Do You Do.

43. Dave’s not a fan of TV singing competitions. “Who’s to say what’s a good voice, and what’s not a good voice? The Voice? Imagine Bob Dylan sitting there singing Blowin’ In The Wind in front of Christina Aguilera,” he told delegates at his keynote speech at Austin’s SXSW festival.

44. He’s an advocate for whiteknot.org, a community organisation which promotes marriage equality.

45. He wrote the riff to Scentless Apprentice, a track taken from Nirvana’s 1993 album, In Utero.

46. Famously, the Foos frontman fell of stage in Sweden in 2015 and broke his leg. He said he was “high as a kite” when designing his stage throne to allow him to continue performing. He was on pain medication at the time.

47. He could have joined Tom Petty and the Heartbreakers - Petty offered Dave the drummer's seat on a permanent basis after he sat in with the band on Saturday Night Live.

49. Before Kurt Cobain died he recorded some solo demos under the pseudonym Late!. The album, called Pocketwatch, was released by Arlington-based label Simple Machines in 1992. Today, it sells on Discogs for around £200.