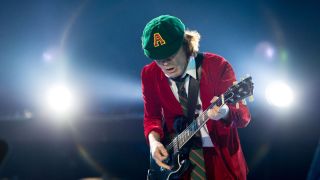 Angus Young thought his big brother, and his sister Margaret, were taking the piss when they first suggested, in the spring of 1974, that he might want to dress up as a schoolboy onstage. But having previously been cajoled into performing with AC/DC wearing - variously - a gorilla suit, a Superman costume and a Zorro-style mask and cape, he’d heard, and complied with, worse ideas.

Malcolm Young had decided that his band needed an image overhaul for a high profile gig in Sydney’s Victoria Park. AC/DC’s founding guitarist told his bandmates that he would be taking the stage in a satin airman’s jumpsuit, while Angus would rock a school uniform: bemused vocalist Dave Evans, bassist Neil Smith and drummer Noel Taylor were instructed to find their own distinctive looks. Australia’s hard rock answer to The Village People duly arrived onstage in April ‘74 with a Harlequin-style Joker on drums, a New York City cop on bass and a peacocking glam rocker front and centre. The gig, by all accounts, was a riot, but Malcolm, already a notoriously hard man to please, was not entirely satisfied: his next ‘image overhaul’ for AC/DC involved telling Evans, Smith and Taylor to fuck off sharpish. The little schoolboy fella could stay though…

More than three decades on, Angus can probably still fit into that Year 11 Ashfield Boys’ High blazer he borrowed from Margaret Young’s son Sam for that Victoria Park gig. His trademark look, though, has evolved slightly… as the following visual history confirms.

Squealer: The perils of going commando cruelly exposed at The Marquee, May 12, 1976. Luckily, the boys are safely in the barracks, to the relief of everyone in the front row. And by boys, we mean his testicles.

Problem Child: Angus receives a brutal lesson in discipline in 1976. Imagine if a teacher did that these days? They’d be shamed on Twitter and everything.

Curls Got Rhythm: Angus toys with the ‘Little Lord Fauntleroy’ look onstage in London, 1980. Mid-solo, he’d often delight the crowd by pointing to his favourite corner of the venue.

Riff Raff: Obviously a mufti day at the School Of Rock. Here’s Angus with a South American football player circa 1986. Possibly River Plate’s centre forward? We’re not sure.

The Rocket: It’s 1988. If you’re going to play Madison Square Garden, you don’t want to arrive in a splitter van. Invest all box office takings in a 6’ spaceship.

What’s Next To Maroon: Angus hits a purple patch in London, 1991. AC/DC’s roadies were notorious for leaving bits of Lego on the stage.

Red Devil: Angus unveils his new band R/DC at Coachella in 2015. Interesting fact: Angus’ row of Marshall stacks once rivalled the Great Wall of China and can still be seen from space.

Bad Boyo Boogie: Angus with Sir Tom Jones during rehearsals to find a replacement for Brian Johnson earlier this year. Sadly, it didn’t work out due to Tom’s TV commitments.

Bad Boy Boogie: How AC/DC got me grounded