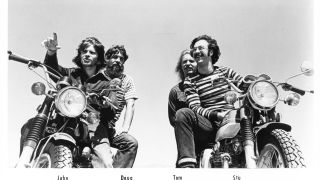 The end of the 60s was a transitional time in America – not least for the members of Creedence Clearwater Revival. “At the start of 1969 we were walking the tightrope between fire and ice,” recalls band lynchpin John Fogerty. “We’d just put out Proud Mary, and in two weeks had gone from being one-hit wonders with [1968’s] Suzie Q to being on our way up. But I was looking ahead. I was desperately worried we were about to fall flat on our faces. In those days, you put out singles every few weeks, so when Proud Mary was on the radio I knew we had to write the next one.”

And so, shrugging off the backslaps, a steely-eyed Fogerty sat down to write the band’s next single.

As the opening riff rolled from his fingers, a lyrical theme began to form in Fogerty’s head. “I’d come up with the chords and melody,” he recalls, “and I got the phrase ‘bad moon rising’ from this little book I’d kept song titles in since 1967. I didn’t even know what it meant, I just liked how the words sounded.

“Then I remembered one of my favourite old movies – a black-and-white 1941 film called The Devil And Daniel Webster, shot in that spooky, film noir way they did back then. It’s a classic tale where the main character, who’s down on his luck, meets the Devil and sells his soul to him. The scene I liked is where there’s a devastating hurricane; furniture, trees, houses, everything’s blowing around. That story and that look really stuck in my mind and they were the germ for the song.”

Naturally, given the times, there was a subtext to the apocalyptic climate conditions described in Bad Moon Rising. “I don’t think I was actually saying the world was coming to an end,” Fogerty says, “but the song was a metaphor. I wasn’t just writing about the weather.

“The times seemed to be in turmoil. Martin Luther King and [US senator] Robert F Kennedy had been assassinated. I knew it was a tumultuous time.”

When it was presented to the band a few days later, the potential of Bad Moon Rising was clear to all but the man who had written it. “It’s a funny thing,” Fogerty says, “but I didn’t feel it was up to the standard of Proud Mary. I was worried that maybe I was already on my way down. It was a lot more rock’n’roll, whereas Proud Mary had connections to early American standards.”

Rhythm guitarist Tom Fogerty, bassist Stu Cook and drummer Doug Clifford didn’t share their leader’s misgivings. Over several days of rehearsals in the shed at the bottom of Clifford’s garden, Bad Moon Rising was enthusiastically worked up before the band hit the recording studio for a session that Fogerty remembers as “the smoothest sailing we ever had”.

“Band relations were very good during the session,” he insists. “We were all on the same page, trying to make our band go. It was actually a very happy time. By then I was very much the leader, but that had only just happened, sometime in the summer of 1968. I don’t know how happy people were with that. I suppose it became a ticking time bomb – that people were okay with it for a while, but not ultimately.”

Hitting No.1 in the UK and No.2 in the US that summer, and lighting a rocket under parent album Green River, there’s little doubt that Bad Moon Rising was the song that made Creedence Clearwater Revival’s name. More open to debate is that its enormous success widened the cracks in the band, with the creative tug-of-war between the four members reaching breaking point in 1972.

“I don’t know if that one song did it,” says Fogerty, “but the fact we were on our way maybe contributed to the breakdown. I’m not just saying this in a bitter way, just referring to my bandmates, but once we started having success and people were talking about us as the No.1 band in the world, I think some people took that as the sign that they could do anything they wanted and it would be a success. It’s a trap I see people fall into.

“I also objected to Bad Moon Rising being strewn around on TV commercials and any old movie,” he adds, “but we had no power in our contracts to veto where our music went. It was everywhere. And for every good movie that you’ve heard it in – for example An American Werewolf In London, which was a pretty cool movie – there were at least 10 more that were awful.”

Thirty-eight years later, Bad Moon Rising is still everywhere. While times have changed since Fogerty addressed the world outside his window, what he wrote remains universal; it’s of its time and strangely timeless. “I could have written that song yesterday,” he says. “It still reflects my personality and the way I do things. I’m very proud of Bad Moon Rising. I’m grateful that, 40 years later, people still enjoy the song – and that I’m still here to sing it.”

Live, John Fogerty occasionally sings ‘there’s a bathroom on the right’ instead of ‘there’s a bad moon on the rise’. “In the wonderful tradition of rock‘n’roll,” he explains, “people misconstrue the lyrics, and that’s what they thought I was singing. And when I hear the song on the radio now, I can see why they thought that – it does sound like it could be what I’m singing. So I do it for fun. I’m not one of these people that walks around going: ‘I’m a serious artist.’ I like to have fun.”

The Long Road Down: How Creedence Clearwater Revival Fell To Pieces