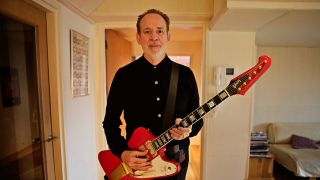 Phil Manzanera’s life was an unpredictable adventure even before he became Roxy Music’s lead guitarist in 1972, aged 21. His family’s journeys through Latin America included dodging the Cuban Revolution’s bullets, before a childhood Beatles obsession led him to public school in South-east London, where he met an influential neighbour, The Soft Machine’s Robert Wyatt.

Manzanera’s new album The Sound of Blue is an “audio memoir” of his musical travels. It opens with a riff learned from his mother as a child in Cuba, while the track Halmstad stops off at the Swedish border, where his love of Scandi-noir found him on the vast crossing seen in the series The Bridge. No Church In the Wild cheekily covers the Kanye West/Jay-Z track built on a sample of 1978 Manzanera guitar, and In Conversation With Andy Mackay sees Roxy’s sax player helping him revisit the band’s glory days. Films to accompany each track will be on the guitarist’s website. Here, he talks Classic Rock through his six favourite albums from a varied career.

Roxy’s second album pushed up the sonic experimentation, just before Brian Eno was pushed out of the band.

“I had a very different trajectory from the others in Roxy. They all went to art school and university and posh things, and I came over from South America, and ended up in a weird duality, which is half-South American and half-European. It was just serendipitous, joining them. From the first time I heard a tape of them, they seemed to tick every box for me. And I really liked the people in Roxy. They were intelligent, talented, quirky, different. And with the difference between life in the band and my life in South America and then South London for a bit, my dreams were coming true. I was 21, and I thought, ‘This is great.’

“By the time we got to For Your Pleasure, we’d been successful with the first album, and were allowed to go to a better, bigger-budget studio, and so we were up at Air Studios, and we were lucky enough to have Chris Thomas produce us. You’re talking about someone who’d worked with The Beatles, and he’d just finished mixing Dark Side of the Moon at Air. There was just so much to learn from him about how to record. And Brian Eno was still in the band, and so we were really firing then. It was the peak of Brian’s contribution, because he left after the tour that we did for For Your Pleasure.

Do The Strand felt like a breakthrough, and then on side 2, we could be a bit more experimental, to show all the different dimensions of Roxy. That it wasn’t just about pop songs – in songs like For Your Pleasure or The Bogus Man, we could be weird and wonderful. That period of Roxy was incredibly exciting. It’s the first time that we had been recorded properly, and told how to part-play, and the sound of the recording was so much better than the first one, although the first one does have its charm. It was just incredibly exciting to be up at George Martin’s studio, and things seemed to be happening for us. I’d been in Roxy for a year by then. We had a very good critical response, so you felt that you were in the right place at the right time.”

Eno’s second album introduced his Oblique Strategies technique of random card instructions to a band led by Manzanera, with Robert Wyatt and Roxy’s Andy Mackay also on board.

When we were doing the third album with Roxy, Stranded, I was also working with Brian Eno on his first album after he left the band, Here Come the Warm Jets. I’d found the studio for him in Clapham, and I’d be there from 12 till 6, and then I’d be getting on the tube and going up to Air Studios to do Stranded. I didn’t mention it to Bryan [laughs], that I was actually working on Eno’s album as well! No, I didn’t bring that to their attention. [The attitude to Brian] was a bit strange like that. But we continued working together for another 4 or 5 years, Brian and I.

We were actually sharing a flat at the time. And we were friends. Many hours were spent in front of his Revox tape recorder in Maida Vale. And co-producing Taking Tiger Mountain (By Strategy) was great fun, because we’re talking about the period when Brian’s Oblique Strategies for Cards came out, and we would be using them in the studio, just breaking all the rules and having loads of fun. We did all those things in a light-hearted way. Like with a card saying, ‘Tape Your Mouth.’ We all did it, and what it meant, really, was, ‘Stop talking’, and actually listen to the track properly, and stop messing around with it.

As Roxy began to splinter for the first time, Manzanera dragooned them (plus Eno, but minus Ferry), members of his pre-Roxy band Quiet Sun and Robert Wyatt for his own debut.

This was my first solo album. By that stage, Bryan Ferry had done his solo album, Andy Mackay had done one. So I thought, ‘Right, I’m going to ask if I can do one.’ It was just an excuse to get all my friends together to play on it. And of course, one of my super-heroes who I wanted to get on it was Robert Wyatt, who I met when I was 16, because he was a mutual friend of my school-friend Bill MacCormick. Well, if you’re 16 or 17, and you come into contact with two people who are in two of the coolest bands in London in 1967 and ’68, which is Robert Wyatt in Soft Machine and David Gilmour, who’d just joined Pink Floyd, then you’re walking round school looking pretty chipper. And everything that Robert was into was passed down via Bill and his brother Ian [MacDonald, the late, great rock journalist]. We just listened to so much different music, everything from Stravinsky to Charles Ives to Mothers of Invention. We were just obsessed with all the new music that was coming out, and that really had an effect on us writing our kind of wacky stuff in Quiet Sun, the band we had after school before Roxy Music. It was a sort of wannabe Soft Machine.

So we got Robert down for Diamond Head, and did a mixture of instrumentals and songs at Basing Street Studios. It was just a thrill to have Robert on the first track, Frontera. I said to him, “Right, can you write the lyrics to this in Spanish?” And in true Robert style, he just got a dictionary, and chose a whole load of phrases. And it’s been the curse of my life for the last 25 years, because all Spanish people say, “It doesn’t make any sense at all.” And yet in a sense it does. So they say, “Wow, those lyrics, they’re so way-out and cool. What’s it all about?” Perfect Wyatt-Spanish? Yes, and he got away from it.

The future Kiwi superstars had another go at their proggy first album (titled Second Thoughts back home), with Manzanera producing in London.

Split Enz became Crowded House later. But I did their first album, called Mental Notes. Roxy had gone over to Australia to play for the first time in 1975, and after a very long journey we got to the hotel and I collapsed on the bed and put the telly on, and this mad group from New Zealand was on. I thought, “My God – I wasn’t expecting this.” We went to play, and they turned out to be the support act. So I watched their set, and they were totally mad. I passed the dressing-room afterwards and said, “You guys were great. If there’s anything I can do to help, just let me know.” And a head popped round the door as I was heading down the corridor and said, “Will you produce us?”

I said, “But you’ve actually done your album already…” He said, “No, we’ll do it again!” So they came to England at the time of punk, and I thought, “God, they’re going to get crucified.” But people seemed to like them. They were just totally, totally mad. Neil [Finn] wasn’t in the band then, he was too young, he was about 15. But he was over, and they sent him to me for guitar lessons. Then they had to leave eventually, because they were destitute. In fact the session fees for my album K-Scope paid for their return air-flights. Then they wrote a whole bunch of hits, and became huge! Was I a mentor to them, early on? I suppose I was.

The singer in that band is still absolutely huge in South America. He’s like the Jim Morrison of Spain – and he looked a bit like Jim Morrison. They were huge everywhere in Europe, except for the UK. They had an amazing sound, and I’ve had a long relationship with all of them since 1990. It was going abroad to produce this band in Spain which led to me producing a whole load of Spanish-speaking acts. I became the no. 1 producer in the Spanish-speaking world, because I was one of the only producers who could speak Spanish, and understand what they were singing about! So that was the start of me working with artists from Columbia, Argentina, Mexico, Spain, Cuba.

Was it like going home? It was. The first 10 years that I was in Roxy, nobody was interested in my South American side at all, I never had one question to do with it. It was only once the Buena Vista Social Club became a hit, and people like Peter Gabriel started becoming interested in World Music, that people said suddenly, “Oh, hang on. You had something to do with South America, didn’t you?” I’m bilingual, and once I start speaking Spanish, a different part of my personality comes out. They’re very lively, fun people. When you’re working with Latino people, lunch isn’t a sandwich brought into the studio, like in the UK. It’s very much a social occasion. They like to enjoy the whole process.

Manzanera was called in by his old friend Gilmour to help make sense of endless hours of half-finished music. A decade later, he’s still the key production crew-member on the Floyd man’s houseboat.

That was great fun, to go full circle, really, having been a self-described grovelling teenage Pink Floyd fan! I had written one track with David Gilmour before, on A Momentary Lapse of Reason. But when David decided he wanted to do an album for the first time in 10 or was it 20 years, it was great to go on that journey. And I seem to still be on that journey! I’m working on David’s new album, and co-produced Pink Floyd’s last one. So in the last 10 years, I’ve done some Roxy stuff, and David’s stuff. It’s a very nice combination. David is a person who could do everything himself, if he wanted to. He can engineer, he can play. But it’s a bit boring doing it on your own, so it’s nice to have someone to bounce off. I tend to think conceptually and contextually about things. He’ll say, “What do you think of that?” And I’ll say, “Hmm, that’s great.” Or perhaps, “Try harder!”

The Story Behind The Song: Virginia Plain By Roxy Music