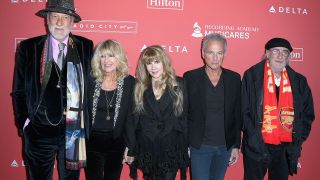 Lindsey Buckingham is suing Fleetwood Mac after he was dismissed from the band earlier this year.

He was reportedly fired due to a scheduling conflict centred around a world tour, with the band replacing him for the live shows with Heartbreakers guitarist Mike Campbell and Crowded House leader Neil Finn.

Now Buckingham is taking legal action again his old band, filing documents in Los Angeles Superior Court claiming that he lost up to $14 million as a result.

The papers, obtained by Rolling Stone, say that Buckingham asked the band to postpone the start of the tour by three months to enable him tour and promote his solo album – with Buckingham also looking into playing solo shows in between Fleetwood Mac duties.

Two days after the band performed at a Grammy MusicCares event in New York in January, Buckingham discovered he was out of the band, with the complaint stating that by excluding him from taking part in the 2018/2019 Fleetwood Mac tour, the band were “in breach of their fiduciary duties of loyalty and good faith and fair dealing.”

The papers add: “The Defendants intentionally acted to interfere with Buckingham’s relationship with Live Nation and the prospective economic benefit he was to receive as a result of his participation in the tour.”

The complaint also states that “After 43 years of camaraderie and friendship, not a single member of the band called Buckingham to break the news to him.

“In fact, not a single member of Fleetwood Mac has returned any of Buckingham’s phone calls to provide him with an explanation for his purported expulsion from Fleetwood Mac.”

Speaking with Rolling Stone, Buckingham says: “Last January, Fleetwood Mac made the decision to continue to tour without me. I remain deeply surprised and saddened, as this decision ends the beautiful 43-year legacy we built together.

“Over the last eight months, our many efforts to come to an agreement have unfortunately proved elusive. I’m looking forward to closure and will always remain proud of all that we created and what that legacy represents.”

A Fleetwood Mac spokesperson added: “It’s impossible for the band to offer comment on a legal complaint they have not seen.

“It’s fairly standard legal procedure to service the complaint to the parties involved, something that neither Mr Buckingham nor his legal counsel have done. Which makes one wonder what the true motivations are when servicing press first with a legal complaint before the parties in dispute.”

Following Buckingham’s dismissal, Mick Fleetwood said that it was “not a happy situation for us in terms of the logistics of a functioning band. To that purpose, we made a decision that we could not go on with him.”

Buckingham then responded by saying that “there were factions within the band that had lost their perspective.”