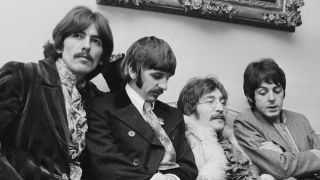 Let's be honest: every band owes The Beatles a huge debt of gratitude. They grew their hair, invented Rock Music, wrote songs that'll last for eons, and turned popular music into a serious proposition. Here are 10 bands who owe Liverpool's finest a particularly big thank you.

OK, so we’re not really claiming The Beach Boys owe it all to The Beatles, but it’s clear the Fabs were crucial to their development. Staggered by the ingenuity of Rubber Soul, Brian Wilson was driven to create Pet Sounds in response. “No one had heard that in rock‘n’roll back then,” Wilson said, referring to The Beatles’ use of sitar and other exotica. “It really did inspire the instrumentation I ended up using for Pet Sounds.” He composed God Only Knows the morning after first hearing it.

Roger McGuinn was slipping Beatles beats under traditional folk tunes during his early days in Greenwich Village. When he hooked up with the rest of The Byrds in LA, their collective Fabs obsession took on whole new levels. The tipping point was a cinema trip to see A Hard Day’s Night, after which they reinvented their look, bought themselves a Gretsch and Rickenbacker and set about transposing Beatles harmonies onto their own brand of George-like jangle.

Robert Fripp once stated that King Crimson was his way of uniting the music of Hendrix, Bartok and The Beatles. Hearing A Day In The Life, an experience he later described as “incredibly powerful”, certainly opened the door to In The Court Of The Crimson King. Lucy In The Sky With Diamonds was a regular at Crims’ rehearsals in 1969, while Lizard addresses The Fabs’ break-up on Happy Family. In 1999, Fripp wrote in his dairy: “Were The Beatles the last example of group genius in Western popular culture?”

The Sabs/Fabs connection goes back to Ozzy Osbourne’s teenhood in the Midlands. Hearing She Loves You for the first time was akin to being hit by “a lightning bolt”, he told Classic Rock recently. “The Beatles were the fucking reason why Ozzy Osbourne started singing.” Geezer Butler was similarly smitten, citing The Beatles as his generation’s great lift-off moment and admitting they changed his life forever. Black Sabbath consummated the love by covering Day Tripper in their early live shows.

Like many of his US generation, Gene Simmons’ first exposure to the Beatles was on The Ed Sullivan Show. It provided a signpost for the rest of his life, with the formation of Kiss his way of emulating that initial thrill. “I’m a child of The Beatles,” he has admitted. “They created this sort of hybrid white version of American music. They could do it all: Little Richard, country, pop, soul, psychedelia. They had no rules.”

The ‘70s soft-rockers were almost entirely indebted to The Beatles, even taking their name from Bad Finger Boogie, the working title of With A Little Help From My Friends. Signed to Apple, Badfinger brought in George Martin as producer and scored a massive debut hit with Come And Get It, a Paul McCartney demo initially cut at the Abbey Road album sessions. George Harrison later took the band under his wing, serving as mentor, producer and occasional guitarist.

The psychotic rush of The Pixies might not suggest an obvious debt, though the harder end of The Beatles’ oeuvre certainly left its imprint on Black Francis. Not to mention their love of great melodies. Francis has cited Yer Blues as a particular favourite, adding that the live double album from the Hamburg Star Club was one of the first records he owned as a kid. “You can hear it all in there,” he said. “They were tough motherfuckers.”

Legend has it that Kurt Cobain wrote About A Girl after listening to Meet the Beatles for three straight hours. His posthumously-released journals also refer to John Lennon as his idol. Dave Grohl was just as big a fan, learning how to play guitar from a Beatles songbook. Both men’s appreciation of melody and harmony fed into the music of Nirvana. “If it weren’t for The Beatles,” Grohl once declared, “I would not be a musician…They seemed to be capable of anything.”

So beholden are the Gallagher brothers that Oasis were often derided as little more than a Beatles tribute band. “It’s beyond an obsession,” Noel once stated. “With every song that I write, I compare it to The Beatles.” Liam even named his first son Lennon. Covers of I Am the Walrus, Helter Skelter and various others aside, you can find Beatles references in everything from Supersonic and Morning Glory to I’m Outta Time and Be Here Now. Even Wonderwall takes its name from a George Harrison soundtrack.

The Beatles’ experiments in psychedelia and sound collage played a big part in the approach of Oklahoma’s freakiest sons. The Flaming Lips have covered various Lennon-McCartney songs in their live repertoire, while a full, guest-packed remake of Sgt. Pepper’s Lonely Heart Club Band (With A Little Help From My Fwends) is due in October. Leader Wayne Coyne has also acknowledged the Fabs’ wider aesthetic. “The Beatles didn’t just make records,” he once said. “They stood for something.”