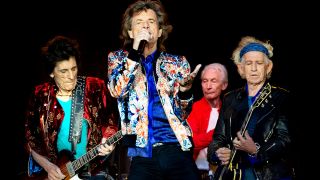 The Rolling Stones are on tour. The biggest touring band in the world – the Stones grossed $120 million with just 14 shows of this tour in 2017 – they are arguably the greatest rock band ever. People are loving it.

The Classic Rock office came back from the London shows buzzing. There’s a proper review in the next issue. But there are certain things no one is really saying and we won’t shirk from the important issues. Like, number 1…

Their hair is unchanged since last we saw them.  In the Hair Colour World Cup, the current and possibly final score – cos let’s face it, Mick Jagger is going to his grave with black hair – is 2-2. As it should be. The colour of the Stones’ hair is all part of their delicate-yet-titanium cosmic balance (which is also the name of the conditioner Mick uses).

In the Grey Corner: Keith and Charlie, the guardians of the Stones’ credibility. Two men who wear their age proudly. Charlie: proud, stubborn, unfuckable. Charlie has barely looked in the mirror since 1974, except to check that his collar is straight*. Keith, meanwhile, is the unrepentant, unflappable survivor, flashing a grin as white as his hair. Keith thinks mirrors are for something else entirely.

In the Black Corner: Mick and Ronnie, the good time Charlies – the lothario and the party animal – the young fathers, with young families, whip-thin, ready at any moment to do the school-run, throw together a packed-lunch or hit a showbiz party.

Even the two other most-core members are perfectly in synch:

The outer circle? Matt Clifford, Sasha Allen, Karl Denson, Tim Reese, Bernard Fowler – all black hairs. This fucks with my theory a little but, c’mon, of course they are. Old guys can’t keep up with the Stones, man.

The set-list is impeccable, obviously. I have put a lot of thought into this and you haven’t, so take my word for it when I say that I can confirm that the Rolling Stones are, as advertised, the Greatest Rock’n’Roll Band In The World.

The greatest band ever, in fact.

In the old “Beatles or the Stones?” argument, the Stones win, not just because they’re still walking, but because of those songs – the sheer width and depth of absolute bangers. For the variety of styles, the riffs, the lyrics, the era-defining anthems, The Stones resonate like few other bands.

The Beatles sound like flower power, Mary Quant and smocks. The Stones sound like fighting in the streets, like sex gods, serial killers and Studio 54. They are bluesmen, rock legends and party-starters, and every song is loaded with signifiers. Street Fighting Man is the Paris riots. Gimme Shelter is the death of the 60s – Altamont, Performance, Charles Manson. You Can't Always Get What You Want is the, uh, funeral scene in The Big Chill.

The set-list has varied slightly on every date on the No Filter tour. When we saw them in Coventry we got:

Which is amazing, even if the Stones doing Like A Rolling Stone is a bit like Coldplay covering Oasis: a sneaky bit of cultural appropriation (“We ARE the 60s/90s!”). They get away with it because a) their name’s in the song and b) because… Look at the other song titles. Coldplay need a bit of help in the feelgood anthem stakes. The Stones don’t.

(For a minute during Like A Rolling Stone, I thought: why not go the whole hog? Why don’t they do Itchycoo Park, Sunshine Of Your Love and Voodoo Chile while they’re at it? But the answer to that is still b) Look at the other song titles on that list. They don’t have to.)

Highlights are Midnight Rambler, played with Jim Jones Revue levels of ferocity and distortion. It’s late in the set: for much of the night they’re like a football team who passes well – totally in possession but unable to score – but suddenly they get one in the net and you can feel them moving in for the kill.

Start Me Up is all-adrenaline. By Brown Sugar, Mick sounds short of breath, but it doesn’t matter because he has something up his sleeve: an outro that goes yeah-yeah-yeah-WOH!, surely the finest combination of sounds since Little Richard hollered "Awopbopaloobopawopbamboom!"

Satisfaction collapses in the middle and they all grin and roll their eyes sheepishly, but in fact it’s one of the best bits: funny and human. Yeah, human. The Rolling Stones are human.

The sound is dogshit, which is totally confusing in Coventry, because support band The Specials sounded great – clean and warm, with separation, and all the stuff you’d expect. It’s Only Rock’n’Roll is so echoey and disjointed it sounds like a dub version – like the band are playing underwater – and the sound doesn’t improve until Miss You, 11 songs later.

This is something mentioned in several accounts of this tour – that things pick up with Miss You – as though the Some Girls disco-stomper, in which black-haired Darryl Jones brings the power with a showboating bass solo and a groove as tight as a chihuahua’s chuff, wakes up the rest of the band (or maybe their sound engineer who suddenly remembers, like a cook who’s forgotten to add salt: “Bass! That’s what we’re missing!”)

Still, the wonky sound, has an unexpected upside: The effect, weirdly, is to turn the whole thing into one big interactive, crowdfunded social media event-cum-singalong. This is not a passive, sit-down-and-lap-it-up type gig. Everyone is singing, videoing, filming themselves singing, dancing like a maniac. Two really stoned people are pretty-much shagging in the aisles. Which brings us to…

We all know the Stones’ story arc: they were mad fer it. Out of their heads. Brian lost in a fog of pills and acid. Keith on the coke and riding that wild horse. Charlie getting on the speed and the smack much later in life. Ronnie the incorrigible boozer, user and rehab regular. Mick: giving it all up and hitting the gym when it got in the way of business. (Bill Wyman? Knee deep in hymen.)

And now they’re all clean (or at least, cleanish). And there's the irony: their audience are absolutely mullered. Like: totally fucking leathered, to a man (and woman).

They are playing to a stadium of the stocious, the slaughtered and the totally shitfaced, the bladdered and blootered, the legless, the mortalled and the miroculous. Half of these people don’t know if it’s New York or New Year. Tonight, the good people of Coventry are completely cunted.

I mean, look at this lot: they’re in a crossfire hurricane, alright, but it was sponsored by Heineken, JD and Coke and red berry Strongbow.

After the gig we spill out into a convention centre below, full of bars and a weird kind of Britpop bloke-rock disco. The music is like a Freshers Week Ball in 1996 – which might also be the last time this lot were on a dance floor.

(Hey, I’m not judging. We were as bad. There were two us, but we were having 4 drinks a round. The next day, my mate Steve wakes up with his (massive bald) head covered in blood and scratches. I was with him all night – neither of us have any idea what could have happened to him.)

Went see the Rolling Stones and the Specials in Coventry on Saturday night. After the show finished, everyone spilled out into this hall where the atmosphere was like a Freshers Week Ball in 1996. #nofilter #actuallythereis Scott Rowley

When it comes to arse-wiggling, hip-shimmying and pointing, Jagger has got it nailed. He's the man. He can do them all at once and everything.  But, considering he's been fronting one of the highest-grossing bands in the world for decades now, Mick’s between-song-dialogue is, well, pish.

Mick has discovered Wikipedia and he’s not afraid to use it. “It’s great to be in Coventry!” he shouts, in Coventry, “the jewel of the West Midlands!”

Yeah, brilliant, cheers Mick. Always good to remind the locals of where they live in the kinda language you’d find in a local council brochure. He may as well have had his phone in his hand as he said it or started a Powerpoint presentation of local places of interest.

“It’s so great that the Sky Blues are on their way up again!” he shouts to a limp cheer. (The Sky Blues = local football team Coventry City who won a Wembley play-off the week before to reach League One.) When he tries praising “the Wasps” (Coventry’s rugby team), there is a pause and then actual boos.

He’s not witty or warm or even weird. He’s like a visiting dignitary, who’s knocked up some opening remarks in the toilet.

I mean, c’mon. Throw us a bone here, Mick. Give us a little insight into what you’re actually like. Or make some stuff up, whatever works. Failing that, get a man in to write some stuff.

6. The Stones in the #MeToo era

Lyrically, Brown Sugar is still a confusing race-and-rape fantasy (initially sung from the POV of a rapist slaver, then seemingly delighting in the idea of the ‘house boy’ shagging the ‘Lady of the house’, before revelling a fantasy of a ‘Cajun Queen’ getting it on with 16 year-old boys) but a quick straw poll in the office reveals that most people just think it’s about Mick having a thing for black women.

Which goes to show ya: when you have that riff and the bit that goes I-say-yeah-yeah-yeah-WOH! you can get away with anything.

Jagger has said he wouldn’t write it today, because a) he’s not daft and b) because the worst thing he can imagine is being on “the wrong side of history”. To prove it, Gimme Shelter is accompanied by a video showing Black Lives Matter slogans, and singer Sasha Allen gets a load of screen time. She is the only person other than Mick and Keith to make it down the ego ramp.

*This can’t be true, of course: Charlie is well into his clothes. But he’s a man who knows how to look like a man. Dying your hair is for people who are kidding themselves on and Charlie don’t kid around. So Charlie looks in the mirror, not because he’s vain, but because he just wants to keep himself nice. And he is rigorous about what he wants to see. He does not want to look like a prick. Hence: grey hair. It’s what happens to your hair when you get old.

The Rolling Stones play Edinburgh's Murrayfield on Saturday, before finishing the tour with dates in Cardiff and London.