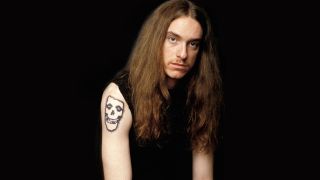 In the few years he was part of Metallica, Cliff Burton built a reputation as one metal’s greatest bass players. Born on February 10, 1962, was something of an anomaly in the thrash metal scene. The unassuming musician wore bell-bottoms while his contemporaries preferred tight black jeans, and he would solo like a lead guitarist on stage – just listen to his frantic instrumental showcase (Anesthesia) Pulling Teeth, from the band’s debut album, Kill ’Em All.

Cliff was killed in a tourbus crash near Ljungby, Sweden, on September 27, 1986 at the tragically young age of 24. But while he’s gone, his music and his memory remain. Here are 16 things you may not know about the Legend In Loon Pants…

1) Like Metallica frontman James Hetfield, the first musical instrument Cliff learned to play was the piano. He had lessons from the age of six.

2) He only began to play bass at the age of 13, after the death of his older brother Scott. According to his parents, Burton said “I’m going to be the best bassist for my brother” and put in up to six hours of practice a day – even after joining Metallica in 1982.

3) He counted Geddy Lee, Geezer Butler, Lemmy, Stanley Clarke and Phil Lynott as his inspirations. “Lemmy had an influence in the way he uses distortion,” Cliff revealed.

4) While his love for southern rock has been well documented, Burton was also a big fan of R.E.M., Peter Gabriel, Yes and The Police. He also loved classical music, especially Bach, which informed his contributions to Metallica.

5) When he had a job at an equipment rental yard, Burton’s nickname was ‘Cowboy’, because he always wore a straw hat.

6) Burton’s first band were called EZ-Street, named after a strip bar. Other members of the band included future Faith No More members Mike Bordin and Jim Martin. “It was pretty silly, actually,” Burton said.“We did a lot of covers, just wimpy shit.“

7) While Burton was in the band, EZ Street finished fourth in a local Battle Of The Bands contest. That was in 1979, when the band’s three song set included a cover of Bowie’s Rebel Rebel.

8) Burton was in the band Trauma prior to joining Metallica. One of the songs they recorded with him, Such A Shame, is on the compilation Metal Massacre 2.

9) Burton came up with the title for Metallica’s debut album. It was originally going be called Metal Up Your Ass with artwork featuring a knife poking out of a toilet – but the record distributors thought this might damage their chances of being stocked in shops. In response, Burton said, “Just kill ‘em all, man!”.

10) The intro to Damage, Inc. was written and performed by Burton. “It’s about eight or 12 tracks of bass, a lot of harmonies and volume swells and effects and stuff,” he explained. Check out this video by Andriy Vasylenko below.

11) Cliff had nine other Metallica recording credits: Anesthesia (Pulling Teeth), Fight Fire With Fire, Ride The Lightning, For Whom The Bell Tolls, Fade To Black, Creeping Death, The Call Of Ktulu, Master Of Puppets and Orion. He was credited posthumously on the …And Justice For All track, To Live Is To Die.

12) In early 1986, Burton revealed which song was his personal highlight from their third album, Master Of Puppets. “My favourite song is Master,” he told Harald Oimoen in a rare interview. “I think it’s the best Metallica song yet. The lyrics are getting a lot better.”

13) Burton’s final gig was in Stockholm’s Solnahallen Arena in Sweden on September 26, 1986. The band were en route to Copenhagen’s Saga venue the following day.

16)A memorial stone has been laid by fans near the crash site in Dörarp, Sweden. It was paid for by donations from fans and is inscribed with the lyrics ‘Cannot the kingdom of salvation take me home’ from To Live Is To Die, which features on 1988’s …And Justice For All. A plaque is also in the grounds of his old stomping ground, Marshall Elementary School, located in California’s Castro Valley. It reads ‘Thank you for your beautiful music’.