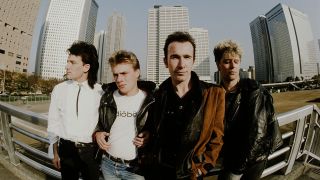 An unusually divisive band, not least in the rock community, for every dyed-in-the-wool convert there are also those for whom Bono’s posturings and weighty themes will always stick in the craw and infuriate. Never shying away from topics other similar-sized acts would run a mile from (religion, politics) and constantly shifting and evolving, whatever your view, there’s no denying a vast body of work of planet-sized proportions. Here’s 10 for you.

Written cheek-by-jowl with Desire, and on more than nodding terms with Bad, Rattle And Hum’s closer is often unfairly overlooked in the pantheon of U2’s greatest. Archetypical in its slow-burn build and climactic wig-out, what drags it out of its conservative moorings is a remarkable string arrangement by Van Dyke Parks (The Beach Boys – Smile), which parachutes Beatles-esque chamber flourishes and slides into the stretched outro.

With the original blue-sky-thinking production duo Brain Eno and Daniel Lanois now on board, the old rock-in-a-box parameters were being deconstructed into a looser, more experimental dynamic. Textured, incredibly layered yet still propulsive, the addition of a soupcon of swing, dramatic 80s synth stabs and sweeping strings highlighted an eagerness to explore territories previously off-piste. Marrying these with the already well-developed songwriting nous on tap resulted in an underrated treasure.

Forever – for persons of a certain age – conflated with 1985’s Live Aid performance, Bad was the precise moment where Bono pulled off the tightrope walk of his life and connected to the world in the way he was born to. Mildly underwhelming on record, it took on renewed gravitas live, the preferred version being on Wide Awake In America which also breathed new fire into A Sort Of Homecoming.

Perfectly coalescing all their musical strengths at this point – simple driving basslines, plaintive one-note melodies (piano in this instance), scuffed guitar and anthemic vocals – Bono’s contemplation of Lech Walesa’s Polish Solidarity movement was bolstered by the eyes-on-the-prize-of-MTV video. An early marker of what would become the band’s virtual trademark – grand, bold gestures played out with canniness and ambition – you can guess the release date.

Overtly political – if decidedly non-partisan: “This is not a rebel song” – Bono’s condemnation of sectarian bloodshed skilfully sidesteps any direct finger-pointing and neutralises the myopia of nationalism with humane observation. The military two-step snare and abrasive electric violin echo the violence of the subject matter, while the chorus opens up from minor to major key suggesting at least some hope. Its lineage in the canon points forwards to Pride, Bullet The Blue Sky, Mothers Of The Disappeared and other pleas of protest.

Like One, another relatively ambiguous lyric. This time it relates to Bono’s relationship with the band, which can then be easily extrapolated into the ups-and-downs of love. The Edge’s ‘Infinite Guitar’ (the high-pitched sustained ethereal notes in the first half, not entirely dissimilar to Daevid Allen’s glissando technique) adds a layer of remoteness as Bono’s vocal slowly builds to an emotive climax. Stirring, almost religious in its zeal, it propelled the band to No. 1 in the US for the first time, and up into the world-class league where they still reside.

After the relative underachievement of 1997’s Pop, the band’s grip on the singles market was waning, cue Interscope boss Jimmy Iovine’s proclamation that Beautiful Day would be the next one. A seriously impressive return to form, channelling early-era glories with enough euro beat and studio pizazz to anchor it to the moment, the band once again reclaimed the zeitgeist with full spectrum dominance. Michael Stipe also chipped in with his own ha’penny worth: “It makes me angry that I didn’t write it”.

Another milestone in a career full, the most technically complex song in the canon had a fraught genesis in both the arrangement and the mix. Legend has it Brian Eno was only just prevented from erasing the whole thing as a staged accident, such were the frustration levels. The protracted intro assuredly shifts from 3⁄4 into 4⁄4, shimmering as it goes, before opening up into the type of epic arena rock Coldplay still have nightmares about. Essential.

Proof, if any were needed, that lyrical ambiguity and big themes are one of the quickest routes to popular embrace, interpretations of the song’s meaning are as numerous as the cover versions it’s spawned. A luminous ballad with some of Bono’s most persuasive, tender musings, the insistent chord progression and universal subject matter of how to live together, has rendered it a live favourite ever since – usually placed in the top-tier in lists of the greatest songs ever.

Welcome Back: Augustines – snapping at the heels of prime-era U2

U2 Bono's shades a result of chronic eye condition