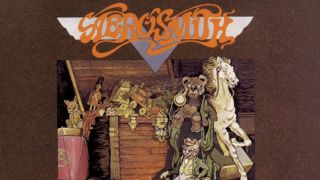 Recorded between January and March of 1975 at New York’s Record Plant, and released just a month later, Toys In The Attic was the third studio album from fast-rising Boston rockers Aerosmith. Produced by Jack Douglas, it saw the band taking their songwriting to another level after a year on the road touring previous release, Get Your Wings. The album – lean and mean and weighing in at just over 37 minutes – turned out to be the band’s most successful release with eight million copies sold in the US alone. With class, groove, swing and sass etched throughout, it’s not hard to see why. Here’s our ranking of the album’s nine tunes, from the bottom to the top…

A solo composition from singer Steven Tyler offers up his take on the traditional bible story of Adam and Eve, complete with a deliciously lascivious vocal delivery. The subtle horns that underpin the song’s chorus add a charming extra fleck of colour, while the harmony guitar interplay between guitarists Brad Whitford and Joe Perry showcases the intuitive understanding between the two that added so much to Aerosmith’s emerging sound.

The only song to feature a writing credit for guitarist Brad Whitford alongside Tyler, this is a slow and dirty groover with an insistent riff that just doesn’t give up for fully five minutes. Tyler sounds at his most malevolent here, as he appears to lament the loss of trust in a relationship going wrong. One particular melodic ascending chord structure offers some light in what otherwise feels like a heavy tune, but that little interlude does nothing to hurt a song that feeds off its own dark energy.

One of the album’s lesser-known tracks is no slouch, which only goes to show how consistently excellent Toys is. Tyler is on rare form here, rapping about his love/hate relationship with the rock’n’roll lifestyle. “If I don’t stop changing I’ll be writing out my will.” The insistent piano work adds extra charm to what is already a seriously endearing song, and drummer Joey Kramer gets a special shout-out here for keeping the band’s groove solid and swinging for all of this tune’s four and a half minutes.

6. Toys In The Attic

A real cage-rattling rocker, written by Tyler and Perry, that pounds hard and fast, while still adding that special Aerosmith sauce of undeniable swing. Perry’s nimble fingers drive the main riff, while Tyler goes off into some sort of stream-of-consciousness that may or may not be about the loss of innocence, screaming, “All of the things that you learned from fears/Nothing is left for the years.” With this surreal rocker you’re never quite sure, which only adds to its charm.

Aerosmith really stretch out and groove on this big band hopper, first popularised by Bull Moose Jackson in 1952. It shows a band not only prepared to take on any musical style, but able to pull it off with style and class. Throwing horns and honky tonk piano all over the place, Aerosmith are happy to let the tune itself do the heavy lifting, while Perry and Whitford offer up some of the coolest little accompanying licks you’ll find anywhere. Tyler being Tyler, he clearly loves the double entendre of the lyric and just can’t hide his glee as he tells the listener that, “she just loves my big ten inch… record of her favourite blues.”

4. You See Me Crying

An album closer that set the style for a number of Aerosmith’s early ballads, owing much to the Beatles’ sense of grandeur and orchestration. Written by Tyler and Don Solomon, who played with the singer in an earlier band, Chain Reaction, this is a sophisticated piece of piano-led rock balladry that sees the singer in melancholy mood, unashamedly letting an unidentified lover know how much he needs her. A button-pushing big ballad that’s so expertly crafted you can’t help but fall in love with it.

One of rock’s greatest ever tunes is now so familiar that it’s hard to recognise just how innovative it was when it first emerged. Featuring an instantly groovy riff from Perry, the guitarist shows himself to be a player of great breadth and taste as he delivers a grab bag of subtle tricks from start to finish on this 3.40 classic. No wonder the song’s staccato groove went on to appeal to rap stars everywhere. Tyler is at his most cheeky here as he transforms himself from “high school loser” to a lothario capable of attracting “the classy kinda sassy.”

Written by Tyler and bassist Tom Hamilton and one of the great overlooked Aerosmith songs, this number highlights their growing writing confidence at this stage of their career. Starting with a simple chord structure, underpinned by a super-melodic bass line, the song then shifts up a gear as Tyler recounts the story of a sad and lonely child who ends up in prostitution. “When she cried at night, no-one came.” The song is a weird combination of beautiful on the surface, creepy underneath, and it’s this often-used subtle juxtaposition that gives this album its edge throughout.

A brilliantly laid-back, psychedelically tinged opening section featuring marimba, shakers and voice box builds and builds, before seguing into one of the finest rock riffs of all time. But this song isn’t just about the riffs, of which there are many brilliant examples. It’s about an all-round gem of a Tyler/Hamilton composition, which puts songwriting and melody to the fore, and ably demonstrates how the best rock is played with both soul and groove. Simply masterful.

The Story Behind The Song: 'Dude (Looks Like A Lady)' by Aerosmith