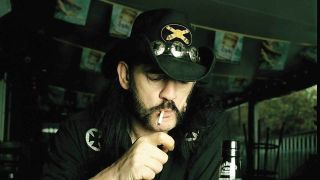 In the end, the biggest surprise was that Ian ‘Lemmy’ Kilmister was a human being after all. A figure of unfathomable importance to the world of music, and to heavy metal in particular, Lemmy was not supposed to die. He was meant to be indestructible. Many of us have joked about visions of a post-apocalyptic wasteland, with Lemmy, Ozzy and Keith Richards sitting around a small campfire, swapping tales of rock’n’roll derring-do and sharing what’s left of the world’s alcohol supplies… but the tragic reality is that we have finally lost Lemmy, and one of the most important and enduring sagas in musical history is over.

Motörhead’s reign as one of metal’s most seminal bands began with the release of their second album, Overkill, in 1979. It is well documented that Lemmy never accepted the idea that Motörhead were a heavy metal band. “We play rock’n’roll!” he would insist, and he genuinely had a point. But Overkill’s thunderous double-kick intro, played by the also much-missed Phil ‘Philthy Animal’ Taylor, is the obvious starting point for so much of the music we now take for granted. Without Motörhead’s persistent sledgehammer sonic attack, the emergence of thrash and speed metal via Metallica, Slayer and many more would not have happened, at least in the way that it did. And without that development, it’s hard to imagine 90% of today’s metal bands existing at all. In 1980, Motörhead’s legend was established with the platinum-plated classic Ace Of Spades.

Here was an album that everyone – metal fans, classic rockers, punks and skinheads – immediately took to their hearts. Led by its immortal title track, but in no way overshadowed by it, Ace Of Spades took Motörhead into the charts and into our hearts. It was fast, furious, snotty and dangerous; its three creators – Lemmy, Philthy and guitarist ‘Fast’ Eddie Clarke – looking unfeasibly cool and menacing on the album’s sleeve. Rock’n’roll outlaws? You bet your fucking arse.

Even at this early stage in Motörhead’s rise to glory, Lemmy was an icon. His was a face that betrayed a million late nights, a shitload of drugs and booze, and a never-say-die attitude that would define him for all time. He was unmistakable: the cowboy boots, the leather and denim, a succession of awesome hats, a cigarette permanently on the go… Lemmy was rock’n’roll personified, and his aesthetic influence on the heavy metal world is deep and unerring.

Then there were the live shows. Thousands of them, year after year after remorseless year, delivered with the kind of authority that simply can’t be faked and, as those of us with howling tinnitus will doubtless attest, at the kind of volume that threatened to make skulls explode. Other bands will claim to have been louder at various points along metal’s evolution, but Motörhead fans knows the truth: no one has ever done it louder.

In the aftermath of Lemmy’s death, much has been made of the band’s so-called glory years, but there’s a strong case to be made for the second classic lineup of the band being every bit as important as the first. In the last decade, Motörhead have released numerous fantastic records, many of them the equal of those revered classics, including last year’s phenomenal Bad Magic – a punked-up, startlingly heavy and impossibly nasty final statement from three men who never lost their sense of urgency.

Throughout Metal Hammer’s 30 years, Motörhead have been a cornerstone of our world. A world without Lemmy Kilmister was unthinkable a few months ago, but that’s the world we’re stuck with. We owe it to him and the bandmates he left behind to never turn that music down, and never stop living life at 200mph and maximum volume.

We will miss him terribly. But he left an insane amount of brilliant music behind, and his spirit will live on in each and every one of his global army of ’headbangers. Ian ‘Lemmy’ Kilmister – 1945-2015. He didn’t want to live forever. But he will. Motörhead for life.