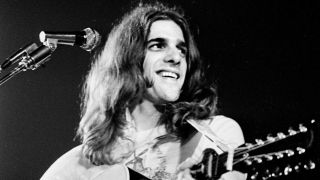 Frey — who died Monday in New York at the age of 67 after battling Rehumatoid Arthritis, Acute Ulcerative Colitis and Pneumonia — was a man of drive and purpose, a product of his native Motor City who kept one hand on the wheel and the other free to do whatever was necessary to keep making forward progress. “He had a drive, an imagination and a talent that was just titanic,” Bob Seger, a friend of Frey’s for 50 years, said after hearing the news of his death. “Make no mistake about it – he was the leader of the Eagles. And they’ll tell you that.”

Sure enough, Eagles co-founder Don Henley conceded in a statement that his “brother” Frey ”was the spark plug, the man with the plan. He had an encyclopaedic knowledge of popular music and a work ethic that just wouldn’t quit.”

The swaggering attitude and killer instinct got Frey, and the Eagles in general, a bad rap on occasion. The final show of the group’s first phase, on July 31, 1980, will be remembered not as a benefit for California Senator Alan Cranston but as “Long Night in Wrong Beach,” when Frey spent the show ready to rumble with guitarist Don Felder, promising to “kick your ass when we get offstage.” He could be admittedly outspoken, truculent, cantankerous, brusque and, in common critical parlance, arrogant, but Henley drew a more comprehensive picture in describing his Songwriters Hall of Fame Partner as “funny, bullheaded, mercurial, generous, deeply talented and driven.”

The results of all that are beyond question. Over the band’s 44 years — with a 14-year break between 1980-94 — the Eagles sold more than 150 million records, with six albums that hit No. 1 in the U.S. and nine that went Top 10 in the U.K. Its legion of enduring hits includes Take It Easy, Peaceful Easy Feeling, One of these Nights, Take It to the Limit, Hotel California, Life in the Fast Lane. Their_ Greatest Hits_ (1971-1975) was the best-selling album in the U.S. during the 20th century and still jousts with Michael Jackson’s Thriller as the nation’s top-selling album of all time.

The Eagles also won six Grammy Awards, five American Music Awards and were inducted into the Rock and Roll Hall of Fame in 1998. The group were also slated to receive a prestigious Kennedy Center Honor in Washington, D.C. in December but had to postpone due to Frey’s health issues.

“It’s a big story,” Frey said when the History of the Eagles documentary was released in 2012. “We’ve kind of been an open book, more open than we’d like. The thing is we’re still here. We’re still doing it. The music should be more important than all that other stuff.”

Music was the most important thing for Frey as he grew up in the Detroit suburb of Royal Oak. “The radio was on all the time at my house,” he recalled. “We heard all of the songs. One of my earliest memories was sitting in my grandmother’s kitchen and my mother was doing the ironing with the radio on, singing with the Andrews Sisters. So obviously music is special to me.” He was classically trained in piano, but rock’n’roll bit hard and sent him to learn guitar as well. “I heard that stuff and knew that’s what I wanted to do,” he said.

Blending rock with influences from Detroit’s potent R&B scene, Frey became a fixture in the local music scene as a teenager, playing in bands such as the Subterraneans, the Four of Us, the Mushrooms and the Heavy Metal Kids. He and Seger became friends after the latter wrote and produced the first song Frey ever recorded — Such A Lovely Child for the Mushrooms. And Seger brought Frey in to sing backup on his 1968 hit Ramblin’ Gamblin’ Man. “I just knew right away he had something special,” Seger recalled. “He was a great kid. I always kind of thought of him as my baby brother, a little bit.”

Frey’s ambition led him to Los Angeles, where he began exploring the roots of the Eagles’ rock, country, folk and R&B blend living in the same apartment complex with fellow songwriters Jackson Browne and JD Souther. Frey and Souther formed the short-lived Longbranch Pennywhistle, but it was meeting Texas transplant Henley and subsequently joining Linda Ronstadt’s band together in 1971 that really put the Eagles in flight.

“In those days we didn’t have enough money to put people in separate rooms, so Glenn and Don were rooming together and they each discovered the other could sing and was a great songwriter,” Ronstadt recalled back in 2013. “Glenn used to call Don his secret weapon. He said, “I’m gonna do a band with Don. We’re gonna do a band together.” I said, “That’s a great idea.”

The Eagles lifted off in 1971, recording 1972’s debut Eagles, 1973’s Desperado and parts of 1974’s On The Border in London with Glyn Johns. The group never looked back for 19 years, weathering a few personnel changes, while Frey and Henley established their leadership both as a songwriting team and also a singing tandem in which Frey’s earthy twang complemented Henley’s more pristine tones. But egos, infighting and simple wear and tear — some of which was chronicled in Felder’s revealing 2006 memoir Heaven And Hell: My Life In The Eagles (1974-2001) — took its toll, and the Eagles spent their time apart making caustic remarks about each other as they pursued their solo careers. Henley even remarked that the band would reunite “when hell freezes over,” giving a name to the inevitable reunion that took place for 1994’s album and tour.

“The Eagles sort of has a life of its own,” Frey once explained. “Everything’s got to be just right for things to happen for us.”

Frey spent the off years expanding his creative reach. His solo albums traipsed from the upbeat No Fun Allowed to the after-hours vibe of The Allnighter and the smooth R&B roots of Soul Searchin’. Frey’s greatest successes were one-offs, however — The Heat Is On for the film Beverley Hills Cop and You Belong to the City and Smuggler’s Blues for TV’s Miami Vice. The latter helped Frey forge an acting resume as well, and he went on to appear on screens both small (Wiseguy, Nash Bridges, Arli$$ and the short-lived starring vehicle South of Sunset) and large (Jerry Maguire, Let’s Get Harry).

Frey also made some lifestyle and perspective adjustments that countered some of the angst he felt with the band. “I never had time to enjoy any of the success I had,” he once ruminated. “I was too busy in the Eagles. We were always too busy plotting our next move, always trying to make something click. So I learned to play a round of golf every now and then instead of worrying.”

After the Eagles reunion, Frey achieved further “balance” between the “mothership” band, his solo work and his family — second wife Cindy and children Taylor, Deacon and Otis. He released his last solo album, After Hours, in 2012 and had started writing some originals for another album. According to Henley, Frey also took the lead in developing an Eagles stage musical for Broadway. And, Seger says, his driven friend had also learned to appreciate the sold-out arenas and stadiums and rapturous receptions his band received around the world.

“Every time I saw him in the last 10, 11 years, he was so grateful to the fans,” Seger said. “The first thing he’d say to me — normally he’s start with a joke or something — but then he’d say to me, ‘Isn’t it amazing, Bob, we’re still doing this at our age?’ I am so grateful that these fans keep coming out.’ And he meant it, every word. He was definitely sincere.”