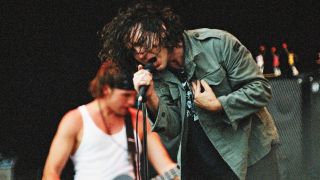 In the summer of 1993 Time magazine approached Nirvana and Pearl Jam's management with a proposal to put their artists on the cover of an autumn issue.

The magazine was keen to do a feature on the rise of ‘grunge’, an underground musical movement that exploded into the national consciousness from the moment, on January 11, 1992, that Nirvana’s Nevermind album toppled Michael Jackson’s Dangerous from the top of the US Billboard chart.

One week earlier, Pearl Jam had scored a minor chart success of their own, when their debut album Ten debuted on the Billboard 200 album chart at Number 155. This was hardly an achievement to warrant the popping of champagne corks, but it was nonetheless a significant moment for the Seattle band, demonstrating that four months on from the release of the album Ten still had legs. A further four months on, Ten passed the one million sales mark in America: a year later, its sales had eclipsed even those of Nevermind.

The release of new albums by Pearl Jam and Nirvana in October 1993 then promised to be a big deal. Though the two bands were often portrayed as bitter rivals in the media – a situation undoubtedly fuelled by snarky Cobain comments about what he perceived as Pearl Jam’s lack of punk rock credibility – the camps had recently been reconciled, with Cobain and Pearl Jam frontman Vedder even slow-dancing arm-in-arm at the 1992 MTV Awards. And so, when they were approached by Time, the group’s took a bilateral decision not to participate in the magazine feature. Despite this, when the October 25, 1993 issue of Time hit news stands, it was Eddie Vedder’s face staring out from the cover, which hailed “angry young rockers like Pearl Jam” giving voice to “the passions and fears of a generation.”

“We’ve been swallowed up by the mainstream,” Vedder lamented. “No-one is going to want to listen to us.”

It’s little wonder that Vs. sounds so confrontational, so pissed-off and agitated. Like Nirvana’s In Utero, released five weeks previously, the album was a reaction to success, for like their peers in the Seattle rock underground, the members of Pearl Jam were knocked sideways by the phenomenal speed at which grunge spread across the globe. Quite simply, this was never meant to happen.

“From the first notes of the Nirvana record you just knew that it was absolutely going to change…something,” noted guitarist Stone Gossard. “When our record started to sell too, it was weird, and really stressful. For me personally the stress came from us being huge but feeling like you were kinda crap. Everybody was insecure and tense, it was such an odd time.”

Pre-production for the band’s second album began in February 1993 in Seattle, switching to California the following month. Eighteen months on the road had solidified a unit which had only been in existence for six months when they recorded Ten, and the new songs largely developed from rehearsal room jams. The sound was rawer, looser and more in-your-face, exactly what band leader Gossard - who considered Ten “over-thought, over-played and over-rocked” - wanted. Working with producer Brendan O’Brien for the first time, the quintet determined to capture this new-found aggression on the record.

With Vs. they achieved this and more. From the opening riff of Go, the album has a ferocity and bite which leaves the more stately Ten in the dust, sounding like the work of a hardcore punk band rather than a classic rock outfit. On Animal Vedder established the idea of the quintet as a unit (“five against one”) and expressed his growing revulsion with disingenuous media attempts to co-opt his band’s aesthetic and ideas (“I’d rather be with an animal.”) There’s little let-up on this initial explosion of anger. The seething Daughter deals with child abuse, Glorified G attacks macho gun culture, W.M.A. is a scathing dissection of institutionalised racism and police brutality, while the more tender and melodic Elderly Woman Behind The Counter In A Small Town was a meditation upon feelings of entrapment and suffocation, which could be read as a metaphor for the band’s own sense of powerlessness as the machine around them grew. That same notion was made even more explicit on Leash, with Vedder singing “We will find a way, we will find our place” then screaming “Get outta my fuckin’ face.”

Lest anyone was still in any doubt, the title of the album too was a challenge, a declaration of independence and intent from a group hell-bent on self-determination, stubbornly refusing to buy into the game. “I will stare the sun down until my eyes go blind,” Vedder sang on the closing track Indifference. “I won’t change direction, and I won’t change my mind.” In this respect, the group’s refusal to make a single video for the album was entirely consistent.

On the surface this stance didn’t immediately impact upon the band’s popularity - the week after Time magazine’s ‘grunge’ special was published, Vs., entered the Billboard chart at number 1, selling some 950, 378 copies in its first five days on sale, a sales record that would not be topped for five years – but in wilfully taking a stand against the commercial forces of MTV, the mass media and, indeed, their own record label’s marketing plans, Pearl Jam would ultimately save their souls and ensure their continued relevance as a band. An upraised middle finger of a record, Vs. still sounds as fierce and visceral today.