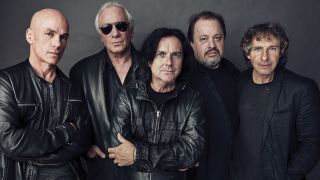 The concept of fans pledging money online to fund an artist’s album is now commonplace, but Marillion pioneered the idea by persuading their following to pay months in advance for Anoraknophobia. It’s a business model they’ve regularly returned to in the intervening years, with fans being rewarded for that loyalty by having their names printed in the credits of expansive limited editions. In a surprising business move, for new album FEAR they’ve decided against arranging the advance ordering of the album themselves and have instead joined up with PledgeMusic.

Part of the reason for that change is that they’re victims of their own success. The large amount of orders have become difficult for the staff at Racket to deal with, especially when the unavoidable emails flood in due to a fulfilment company making errors and losing orders.

“The customer service aspect of it was just getting mental and taking up all the time” says Hogarth. “At the beginning of all of this, we had a look at it and thought, ‘Yes, we could do it, but we’ll need another three or four members of staff, and we’ll need more premises.’ We could have afforded it and done it, but we thought, ‘Is this what we really want to be doing?’ We’re a band and we don’t really want to become a label. We don’t want to become a proper record company.

“It goes back to what we were saying earlier – people get into bands to avoid all that shit, not to be taking it on. Pledge approached us and said, ‘You’re the inventors of the whole crowdfunding thing. We like to think we’re now the flagship of it. Why don’t we come together?’ We are still tinkering with the business model and trying to work out the best way.”

“To be fair, we’re not the ones doing the work,” says Kelly. “But it is a bit of a headache when you’re getting packaging made and coordinating all this stuff. Then you’ve got a bunch of people at fulfilment companies who aren’t used to packing and shipping CDs. We’ve used different companies in the past for the fulfilment of the pre-orders and they usually fuck something up. Something happens. Some people don’t get them, or they’re late, or a whole bag of them goes missing.

“There was also the potential to have the crossover to PledgeMusic’s existing database as well, and I’m not sure how successful that was. As a project, it’s been a good experience but we’re undecided about what we’re going to do for the next one.”

It’s been over 20 years since Marillion were signed to a major UK record label, and they’re clearly not missing them, as they reveal…

Mark Kelly: “I always remember that horrible let-down of making an album. There was a great build-up and you release a single, and it goes into the charts for one week. It then falls out of the charts, it’s all over, and you go, ‘Oh.’ You shouldn’t really be judging all that work on the basis of something like that. And that became the focus really. There were the commercial pressures of a record label paying you all that money and they just want sales.”

“Another thing I learned at EMI, which really shocked me, was that the people in the offices actually had no kind of clue about what kind of deal you’re on, what your royalty payments are like, whether you’re getting one per cent or 90 per cent of an album. They just assume that all the artists are paid really well for what they do, and all get rich. I remember speaking to a girl there and telling her what we earned and her jaw hit the floor. She had no idea. So there are only four people in these major labels, in the business affairs department, who have any clue what the artists are being paid.

“Back in those days, I don’t think we felt directly pressured to change the music. The way they would exert their influence was, they would bring a producer in and they would whisper in his ear. So the phone would ring and it would be, ‘Is there this and is there that? Have you made sure there’s enough of that?’ So that way, they didn’t have to come to us as artists and say, ‘Can you sing it a bit more like that and is there enough chorus?’ because they were whispering at the producer. So the label would always insist on appointing a producer because he was their control system. Who knows what the fuck you can do with artists, but you can whisper in a producer’s ear. Thankfully, that was a long time ago.”

Marillion Q&A: "We're going on and on and on, until somebody dies"