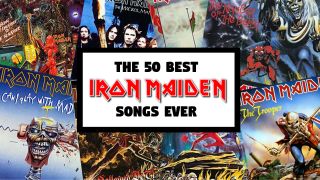 There can truly be no doubting that when it comes to heavy metal, Iron Maiden are one of the greatest and most influential bands to ever have walked the face of the Earth. From their 1980 self-titled debut through to 2015's double-disc epic The Book Of Souls, the East London noiseniks have unleashed 16 albums throughout their career, producing some of the most iconic songs in all of heavy metal along the way.

Ah yes – the songs. They've given us The Trooper, Fear Of The Dark, Run To The Hills, Wasted Years, Wrathchild... the list goes on. In fact, it goes on for exactly 187 songs released over the course of those 16 albums. With a fanbase as huge and as dedicated as Iron Maiden's, we knew exactly where to turn when it came to pulling together the definitive ranking of Iron Maiden's best songs.

We put each of the band's recorded songs into a giant poll, you voted for them in your thousands (we had over 90,000 votes – see what we mean about Iron Maiden fans?), and we put the results into a vast spreadsheet and performed some calculations. We also called upon some familiar faces to hear about the Maiden songs that really make them tick.

Here, we present the official 50 best Iron Maiden songs of all time as voted for by their fans. Let's begin...

Written by Iron Maiden bassist and founding father Steve Harris, along with the band's first official singer, Paul Di'Anno, this song marked the first time Maiden dropped the pace and released their take on a mid-tempo ballad.

Founded upon a smooth emotional performance from Di'Anno that both complemented and juxtaposed the song’s softer feel and its eventual thunderous musical crescendos, Remember Tomorrow is a fitting way to remember the singer’s huge contribution to the band.

"That [song] was about my grandfather," Di'Anno told SongFacts in 2014. "I lost him in 1980, when I was on tour. He was a diabetic. They cut off his toe and his heel, then he lost his leg from the knee down, and he just sort of gave up. But the lyrics don't relate to it, to be honest with you – just the words 'remember tomorrow'. Because that is what he always used to say – that was his little catch phrase. 'You never know what is going to happen, remember tomorrow, it might be a better day.' So I just kept it in, and that was it."

Bring Your Daughter... To The Slaughter wasn’t just Iron Maiden’s first ever (and only) number one single, but it was the first heavy metal song to top the UK charts ever. Not only that, but it managed to beat perma-tanned heaven enthusiast Cliff Richard to the number one spot with his song Savior’s Day, which is as hilarious as it impressive.

The song was originally recorded as a Bruce Dickinson solo joint for the 1989 movie A Nightmare On Elm Street 5: The Dream Child, but Iron Maiden ended up re-recording it and plonking it on No Prayer For The Dying in 1990.

Speaking to Metal Hammer about his love of the song, Bullet For My Valentine’s Matt Tuck said: “It was the first Maiden song I heard, when they played it on Top Of The Pops. Pop and dance was big at that point, and all of a sudden there were these dudes with guitars and super-long hair, yelling about slaughtering daughters. It was pretty eye-opening!”

From Steve Harris’ moody bass intro through to a seemingly never-ending flurry of hooks and anthemic melodies, The Red And The Black is simply one of those instant classics that Maiden fans know instinctively will work brilliantly live.

It mixes straight ahead Iron Maiden metal with a prog rock mid-section, replete with chanting vocals. Penned by Harris alone, and clocking in at thirteen and a half minutes it’s the second longest song on The Book Of Souls with not a second wasted.

It’s an absolute stunner. An emotionally driven voyage with some breathtaking three-pronged guitar work, this isn’t just one of Maiden’s modern triumphs, but an un-fuck-withable classic.

Iron Maiden’s passion for prog really came to the fore when Bruce returned after a six year absence for 2000’s Brave New World, especially in this proggy workout from the album. Based on the story of a man who has a recurring dream about being trapped in a maze of mirrors – sounds like pretty standard anxiety dream fare to us – this track includes just shy of 10 minutes of conceptual noodling and riffing.

“I don’t really know the reason for it,” Harris said of Maiden’s increased progginess following Dickinson’s return. “It was the way it naturally evolved.”

The opening track to Iron Maiden’s most underrated album Fear Of The Dark, it comes screaming straight out of the gate with a neck-snapping riff straddled by Bruce Dickinson wailing away like a banshee with her tits caught in a car door. Released in 1992, the song is based on several political scandals happening around that time, including the European stock market crash, and the artwork depicts Eddie staring menacingly into the face of a man resembling Robert Maxwell (the former media proprietor and MP who died in 1991).

Be Quick Or Be Dead managed to reach #2 in the UK singles chart, is also the first Maiden single to be co-written by Janick Gers – penning the song with frontman Bruce Dickinson.

When Brave New World was released in 2000, we already knew that opening track The Wicker Man was a monster, but it was the album’s second song that sealed the deal.

Ghost Of The Navigator is a spooky, nautical voyage from Iron Maiden’s unstoppable comeback album with Bruce Dickinson back in the fold. This is Maiden at their eeriest, with lyrics fit to fill a horror novel wrapped in a tense, pounding riff.

Penned by Janick Gers, Bruce Dickinson and Steve Harris, the song taps into the exploratory wonder of previous albums like Somewhere In Time and Seventh Son Of A Seventh Son, updating the classic Iron Maiden bluster for a new era and topping it all off with a chorus so big, Bruce could fly it across the Atlantic.

One of Piece Of Mind's undeniable highlights, Die With Your Boots On is a peerless rabble-rouser which takes aims at religious fundamentalists who predict the end of the world is nigh. But the song, inspired by the idea of putting up a good fight in the face of impending defeat, also had another meaning: "If you’re going to go for something, go for it,” Dickinson told Rolling Stone in 2012. “That’s exactly the same attitude we have on stage and we have off stage – work hard and play hard."

Nicko McBrain made his presence felt for the first time on Maiden’s fourth album, and with material as strong as the Dune-inspired closing epic To Tame A Land, he was given the perfect showcase for his inestimable talents.

Legend has it that the band tried to seek permission from Dune author Frank Herbert to name the song after the book, only for Herbert's agent to respond: "No. Because Frank Herbert doesn't like rock bands, particularly heavy rock bands, and especially rock bands like Iron Maiden," leading Dickinson to later call the author "a bit of a cunt" on stage in Stockholm.

Reflecting their steadily growing impetus, Iron Maiden’s first single for EMI Records preceded their debut album by months, taking them into the UK’s Top 40, where they memorably refused to mime for Top Of The Pops, insisting upon performing Running Free live (the first band to do so since The Who eight years earlier).

It’s notable for the galloping bass patterns of Harris, who penned the music, and Di’Anno, who wrote and growled its lyrics of being 16 years old and doing whatever the fuck he wanted. Despite never having been incarcerated in Los Angeles – that would come later – Paul insisted they were autobiographical, “from my days as a skinhead.”

How would Maiden officially kick off the Blaze era following Bruce’s departure? With a dark and lumbering 11-minute monster, that’s how! The X Factor’s opening track Sign Of The Cross rolls along on a sinister, rumbling bassline, gaining bonus metal points for those sweet sinister monk chants.

Many of the songs The X Factor were based on movies and books, and Sign Of The Cross came from the Umberto Eco novel The Name Of The Rose. It’s one of the few Blaze Bayley era songs to remain in Iron Maiden’s set following Bruce Dickinson’s return.