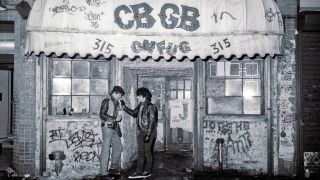 When Hilly Kristal opened CBGB & OMFUG (Country, BlueGrass, Blues and Other Music For Uplifting Gourmandizers) in December ‘73 at the intersection of Bleeker and Bowery in Manhattan’s East Village, he transformed a dilapidated biker bar into a crucible for the most influential artists of the era.

Patti Smith, Ramones, Blondie, Television, Talking Heads, Heartbreakers, Richard Hell, Suicide, Misfits, Cramps all got their start in this single-shop-front-sized, graffiti-scarred, ground-floor sweatbox. Its stage was tiny and toilets hellish, but its bar huge, clientele legends-in-waiting and T-shirts (until this century only available at the venue itself) badges of honour.

As CBGB’s infamy spread its influence lessened and it hosted more vanity shows than cultural groundswells. As the East Side yuppiefied, rents rocketed and when its lease expired in ‘06 it wasn’t renewed. Now just a T-shirted memory, across 43-years CBGB hosted some of rock’s most crucial shows. Here are ten that sealed its reputation.

The Ramones made their first public appearance as a quartet (prior to Tommy joining, Joey would sing from behind the drums), crowded onto a 10’ x 10’ stage, playing to an almost empty club. Legs McNeil remembers: “They were all wearing black leather jackets. They counted off this song and it was just this wall of noise.” Also on the bill: Angel And The Snake, featuring Chris Stein, Debbie Harry and Fred Smith.

The uncrowned Queen of CBGB, Patti Smith was first introduced to the venue by Richard Hell. Upon placing her poetry in a modern rock setting alongside Lenny Kaye, Smith’s ascent was swift. This night also marked Hell’s last appearance as bassist for scene-leading art-rockers Television.

Pioneering UK punk missionaries the Damned were the first to take the 100 Club’s version of the three-chord gospel to the colonials, who lapped it up. Just how often they played over the weekend (augmenting their set with versions of Anarchy In The UK) is debatable, but four nights at two sets a night seems favourite. Support came from Stiv Bators’ brutal Cleveland nihilists, the Dead Boys.

Every week CBGB would hold Audition Showcase nights where a selection of local bands would go through their paces in the hope of securing a more prestigious gig. One such outfit were New Jersey’s Misfits who played their very first show as CB’s auditionees. Ultimately successful, Danzig’s horror punk stalwarts were rewarded with a second gig, opening for The Shirts in June.

To celebrate Friday the 13th, CBGB favourites The Cramps (in their classic Interior, Ivy, Gregory, Knox incarnation) performed one of their most stunning, and much bootlegged, early live shows as Frank Furter And The Hot Dogs. Still unsigned and a good two years prior to releasing their debut album, their audience screamed for angsty lycanthrope Lux like so many Beatles-hungry banshees.

Having arrived at 10.30 for a midnight set, the unknown trio were forced to soundcheck to their audience, but once they hit the stage, their alien blend of soaring tenor vocals and Echoplex pop-reggae went down a storm. Their second 2.30am set saw the band extending instrumental sections due to lack of material, an enforced approach that was to influence their entire subsequent modus operandi.

Before reinventing themselves as B-Boys of no little repute, the pre-hip-hop Beasties were a four-piece hardcore band comprising vocalist Michael Diamond, bassist Adam Yauch, drummer Kate Schellenbach and guitarist John Berry. Also on this Saturday afternoon matinee punk show were Reagan Youth and The Young And The Useless, featuring a guitarist by the name of Adam Horovitz.

Three months after Appetite For Destruction landed, but before it broke big, GN’R played an acoustic set at CBGB’s Record Canteen, basically the storefront next door that (from the mid-eighties) doubled as a record shop, cafe and T-shirt outlet for non-paying customers. They only played two songs from AFD, but debuted four from Lies, a full year prior to its release.

It couldn’t have been more appropriate for Patti Smith to have played CBGB’s final show. Nor for her to feature covers of The Tide Is High (the Paragons’ tune taken, appropriately, to number one by Blondie), Television’s Marquee Moon with Richard Lloyd, the Dead Boys’ Sonic Reducer and no less then four Ramones songs, in a mammoth 3½ hour set. RHCP’s Flea sat in. It was quite the night. Hell, it was quite the 43 years.