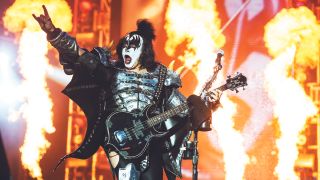 His mother knows him as Chaim Witz but to the wider world he’s Gene Simmons, 66-year-old bassist, vocalist and shameless self-promoter of Kiss. Here’s his manifesto for a better way of living.

THE WORLD WOULD BE A BETTER PLACE UNDER PRESIDENT GENE

I’m concerned about the goodness of mankind, and I think that the earth could be improved under a benevolent dictator called Gene Simmons. Sure I do.

PAEDOPHILES SHOULD BE PUT TO DEATH

Paedophilia is an incurable condition – death is the only answer, apart from sending them to the gulags of Siberia. And priests who are paedophiles are the lowest of the low. If you put on a priest’s collar and use your influence to command someone to suck your cock, there’s a special place in Hell for you.

AN EYE FOR AN EYE WORKS EVERY TIME

To me it’s simple – murder should equal life imprisonment, at the very least. If someone picks up a gun and points it at another human being, whether it’s to steal their money or for another purpose, and the other person dies, then they too deserve to die. Or failing that, maybe the parents of the victim could decide whether or not the murderer rots behind bars or loses their own life.

I DON’T BELIEVE ISLAM IS A “VILE CULTURE”

Although two years ago a magazine said that I did. I was misquoted. Believe me, I’ve studied theology and read the Koran. As a religion, Islam is fine. It’s what people do in the name of Islam that I’ve a problem with. I’m Jewish, and Jews believe that in order to get to heaven, one must do the right thing. It’s not what you believe, it’s what you do. In other words, love thy neighbour as thyself.

I’m not against marijuana for pain relief but on Planet Gene, drugs would be banned. Not because I don’t want you to get high, because that would be your prerogative, but when you become an addict and getting a fix is all that matters, you are a parasite on society. Let’s create those gulags way up in the cold north someplace, where drug addicts who can’t get clean are sent. If you freeze your arse off, you’ll get straight very fast. The idea of social rehabilitation is nonsense. These people live among us and they’re like vampires – they’ll do anything for a fix.

IF YOU MUST MARRY, DO IT LATE IN LIFE

I am totally pro-marriage, but not for young men. We are ill-equipped, financially, mentally and physically, to deal with it. A man leaves his mummy’s house and the last thing he wants is another woman telling him what to do, which is why so many men simply get up and run away. Even if the terms were idyllic, he will stray. So my advice to all men is: don’t get married. You can’t afford it, you can’t deal with it and you will be attracted to other women – you will mount her sister, her mother or anything in plain sight. Wait until you’ve lived life, maybe until you’re 60. Without a cohabitation agreement or a prenup, you’re going to get strung up.

For women, I say get married as often as you can and divorce as fast as you can. It’ll be the single largest financial windfall you’ll ever have without having to work for it.

I’VE CHANGED MY MIND ABOUT OBAMA

I’ve been on record as saying Barack has no idea of what the world is like, and at the time it was true. How can you determine foreign policy when you’ve never been to a country or met its leader? I voted for the man, but that’s naïve. Obama is good-hearted and a decent family man, and foreign policy aside, he’s done fairly well. We have equal rights for gays and same-sex marriages, so he’s very strong in social areas.

POLITICS IS FINE, BUT IT DOESN’T PAY ENOUGH

YOU CAN NEVER HAVE TOO MUCH MONEY

If you disagree with that, you’re delusional. Money isn’t the root of all evil – that’s a lack of money. The less money one has, the more violent one becomes in the pursuit of it. They say money doesn’t buy you happiness – to that I say bullshit. If you’re a miserable sonofabitch, it’s in your DNA. It’s still better to be a rich, miserable sonofabitch. Anybody who can turn around and say, “I have enough – I don’t need another dollar,” please send it to Gene Simmons. I’ll welcome any money you don’t want.

SUCCESS IN BUSINESS IS ABOUT HUGE PROFITS AND TINY LOSSES

I’m a very good businessman. My magazine Gene Simmons’ Tongue, and my record label, Simmons Records, didn’t last, but in business everybody loses now and then. Winning more than you lose is what makes a champion. Even the best of the best fail most of the time. I fail every day, but for every failure there’s a success. My restaurant chain, Rock & Brews, is fast becoming a billion-dollar industry. I’ve a film company called Airbus Pictures. Our [American Arena] football team, LA Kiss, is starting to win. There are various ventures. But does everything strike gold? Absolutely not, though the successes make so much money, and the failures lose so little that it really doesn’t matter.

The same thing is true of Kiss. Largely, the band has failed. We’ve only had two gold-selling singles – Beth [1976] and I Was Made For Lovin’ You [’79] – and, incredibly, the same is also true of The Beach Boys. And in critical terms, oh yeah, Kiss failed. But in reality, Kiss is America’s number one gold record-winning group of all time, in all categories.

THERE’S NO SUCH THING AS KISMET

None of the things I’ve done in my life were preordained. The harder I work, the luckier I get. This idea of waiting around for the planets to line up is delusional.

I’m aware that people think of me as conceited, but you’d be surprised how grounded I am. I know the price of a pint of milk and a loaf of bread and I do my own shopping. I’ve never had an assistant. I drive myself around and hardly ever take limos. There are times when you’re expected to step from an impressive-looking vehicle and I play that game, but I’ll never forget the day that my mother stopped wiping my ass for me. That was very disturbing – it almost felt as though the world blew up.

REALITY TV IS THE NEW ROCK’N’ROLL

I’ve done many of those shows – The Celebrity Apprentice, American Idol and the UK’s Rock School. Some say they make stars of people that don’t deserve the limelight. I disagree. The Kardashians deserve to be the most photographed people on planet Earth. I don’t like the same old, same old. I love the fact that they’re famous purely for being famous. This is a new world, and the people now determine who is famous and why.

I wrote my own songs and I toured hard with Kiss. That’s how I got famous and rich. But everyone has their own journey, and ultimately I’m not the one who decides who gets to ascend to the top of Mount Olympus.

EVEN THOUGH WE LOST A LOT OF STARS THIS YEAR, I DON’T WORRY ABOUT DEATH

I wake up each morning and think, “Whoopee, I’m still above ground.” The alternative isn’t great, but all of us will get our turn so just enjoy life. Work hard, use your brain, use your schmekel for as long as it works, and then you die. That’s just how it is.

WHY WASTE TIME PONDERING MY LEGACY?

Quite honestly, it doesn’t bother me. Fame is fleeting. I’m just thrilled that anybody gave me the time of day, and that they allowed me to wear more make‑up and high heels than your mummy. I wrote one or two good songs, and maybe the rest of them were shite, as the Brits like to say. But at least I got the chance to do so – there are millions of others that never did. Once my ride is over it’s somebody else’s turn, and that’s the way it should be.

BUT WILL PEOPLE STILL BE TALKING ABOUT KISS IN TWO HUNDRED YEARS?

Not about our music, maybe, though possibly about the impact of the imagery. People know that there’s a King and Queen of Sweden but most don’t know what they look like, which is ironic as all Swedes know what Kiss look like. Nowadays, everyone from McCartney to Maiden has a big stage show. I don’t want to say we started all of that, but I’ll leave it there for you to think about. A Kiss show makes you forget about the traffic jam or the fight you had with your girl, and maybe that’s all it should mean.

OH, AND I STILL BELIEVE THAT ROCK IS DEAD

But that doesn’t mean rock’n’roll has no future – of course it does. We’re just waiting for the new saviours. The Foo Fighters are a twenty-year-old band! Someone will come along to pull the sword out of the stone, but my heart goes out to all of the young hopefuls. And remember, college kids, it was you that killed it by downloading the music for free. It wasn’t the communists or the Nazis – you did it.

RAPPERS ARE NOT ROCK STARS

I’ve heard them claim to be so but no, bitch, you are not. That title is reserved for Elvis. And also for Gene Simmons? Well, that’s for others to decide. Modesty is highly overrated. But to say you’re the best in the world, one must be able to back it up. Either it’s a lie or it’s not. If it’s the truth, it’s not boasting.