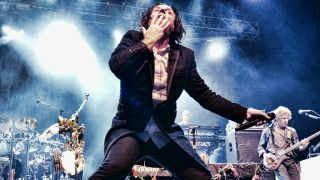 Finding a Marillion fan in the Prog office isn’t too difficult, to be honest, but Dom Lawson stuck his hand up first, so it was him who got to choose the ten finest Steve Hogarth-era Marillion tunes for you to enjoy. Do you agree with him? Let us know in the comments section…

When Steve Hogarth became the new Marillion vocalist in 1988, opinion among the band’s huge fan base seemed equally divided between those who instantly warmed to him and those who simply couldn’t accept that Fish was no longer at the helm. The key to winning over the doubters came with songs like Easter, an emotionally overpowering dissection of The Troubles in Northern Ireland that boasted a melody so incisive and stirring that many Fish-ites found it impossible to resist. It’s still a reliably devastating staple of the band’s live sets today.

A beautiful tribute to the doomed derring-do of world land and water speed record holder Donald Campbell, and his tragic death in 1967, Out Of This World is one of the finest examples of Marillion’s collective ability to send shivers down the spine. Heartbreaking in its elegant sorrow but somehow hugely inspiring too, this highlight from the largely flawless Afraid Of Sunlight album also boasts one of Hogarth’s greatest ever vocal performances. See also the goosebump-inducing alternate version on 2009’s acoustic triumph Less Is More.

Less an attempt to salvage their status as progressive rock behemoths as a necessary exercise in following musical and thematic ideas through to their most fruitful conclusion, Brave was the first bona fide concept album of the Hogarth era. A slow-burning masterpiece that deftly married the grandeur of old with the band’s newfound exploratory sensibilities, it peaked with The Great Escape, a song that encapsulates all the pain, pathos and dualism of Brave’s underlying narrative in six-and-a-half sumptuous minutes.

SPLINTERING HEART (from Holidays In Eden, 1991)

Marillion are particularly good at album openers, and Splintering Heart is arguably the most powerful of the lot. 1991’s Holidays In Eden was an important album for the band, and for Steve Hogarth in particular, as it consolidated the new line-up around a refreshed and pointedly adventurous sound that, while a little too polished for many diehards, made it plain that the future was every bit as intriguing as the celebrated past. The moment when Steve Rothery’s solo kicks in is simply one of the most thrilling in Marillion history.

An unsung gem from an album – marillion.com - that split the vote, even among H devotees, House highlighted Marillion’s collective interest in the atmospheric textures of Massive Attack and the somnambulant drift of Radiohead’s darker moments. Like many of the band’s greatest H-era tracks, it’s a grower; the melodies are hazy and delicate, but insidious and insistent too. The distance between this and, say, Garden Party is enormous, of course, but for those genuinely interested in prog’s limitless possibilities should at least recognise the bravery and verve required to conjure something as distinctive and alien as this.

Although their music has become increasingly experimental over the years, Marillion have never lost the ability to rock out when required. Separated Out is one of the rowdiest things the band have ever recorded, and the one moment on the highly evolved Anoraknophobia album that threw more traditionally-minded fans a bone… albeit while still sounding thoroughly contemporary and unconcerned with appeasing the purists.

Plunging into a harrowing world of almost Ballard-esque alienation and quiet grief, The Invisible Man provided 2004’s Marbles double-set with an absolutely devastating opening 14 minutes. With Hogarth’s lyrics and anguished delivery centre stage, it’s a sublime act of sonic shape-shifting and an authentic emotional rollercoaster that is, in reality, far more progressive than anything the band recorded in the 80s, and with the added bonus that many fans (of a certain age) could immediately recognise the existential havoc that the song skilfully explores. A gruelling masterpiece.

For all their dexterity and love of complex song structures, Marillion remain masters of the pop song. The closing track on 2007’s flawed but lovable Somewhere Else, Faith is an exquisite ballad; beautifully sung and elegantly performed, it stands apart from the rest of the album as a wonderfully coherent personal statement from H and a gentle reaffirmation of the bold compositional values that have ensured that Marillion have stayed relevant in the modern musical era.

Another one of those heartbreaking songs that Marillion seem to conjure at will, seemingly in an attempt to have their fans blubbing hysterically, Fantastic Place is all dewy-eyed fragility and twinkling, melodic grace; a gorgeous Hogarth tour-de-force that, one suspects, could easily have been a massive international hit had it been performed by some blank-eyed pop starlet or r’n’b balladeer. Thankfully, the song remains unsullied by such horrors. The truly scary thing, however, is that Marbles is stuffed to the gills with songs every bit as great as this one.

Unlike many veteran bands, Marillion have never lost their desire to explore new territory, both musical and lyrical. A fearless, compassionate epic that ushered in the immaculate, dynamic sprawl of 2012’s Sounds That Can’t Be Made in startling fashion, Gaza certainly deals with the thorny socio-political and humanitarian issues of the Israeli/Palestinian conflict, but where other bands might be pompous and heavy-handed, H’s razor-sharp poetry and the shocking potency of his vocal performance ensure that Gaza’s impact is vast and enduring.

TeamRock+ members have already seen Steve Hogarth present the Lifetime Achievement Award at the Prog Awards 2016. You can watch the full Prog Awards 2016 too - simply sign up for a free TeamRock+ trial by clicking below.