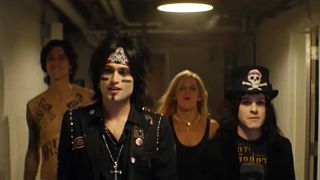 Full disclosure: When I was a lad, I followed Motley Crue around on the UK leg of the Theatre Of Pain tour.

I spent nights sleeping on railway station platforms when I couldn't get back to my student accommodation in London. At Nottingham Royal Concert Hall I waited outside the venue and got Tommy Lee and Nikki Sixx to sign a bootleg copy of the Stick to Your Guns/Live Wire 7" single. At Birmingham Odeon I wore a top hat (it was the 1980s - I also wore fishnet stockings on my arms). I threw the hat onstage, Nikki tried it on, then threw it back.

Motley Crue seemed impossibly glamorous, and impossibly dangerous, and impossibly hilarious. For a young man whose raison d'être was getting drunk and breaking things, they were perfect role models. It didn't really matter that their songs weren't great: they were enormous fun, they rearranged hotel rooms unnecessarily, and they were uncontrollable during interviews. That was enough.

Then I grew up.

When a band's appeal is tied to their recklessly juvenile approach to life, and their ruthless disregard for those around them, it's really hard to love them as an adult. You look back, and you think: man, those guys were arseholes.

The long-awaited movie adaptation of the bestselling book The Dirt is finally upon us, and it concentrates on the band's Arsehole Years. And thankfully – to the band's credit – it doesn't hold back in portraying them as exactly that. They do not come across well.

As Nikki told Classic Rock recently, "Some people had a hard time with some of the honesty that was in the book. We weren't really concerned with covering our asses then and it was important for us to do the movie the same way. It was really important for us not to whitewash anything over."

It's surprisingly entertaining. And that probably shouldn't be a surprise, given that director Jeff Tremaine, who produced and directed the Jackass franchise, is the world's leading expert in portraying stupidity on the big screen.

Some of it's in the casting: Machine Gun Kelly is perfect as gangly livewire dumbo Tommy Lee, and Douglas Booth does a convincing Nikki Sixx. Iwan Rheon steals the show as a sardonic Mick Mars, even if the wig makes him look more like Nigel Tufnell. But The Dirt is mostly entertaining because it does a really good job of making the audience feel like they're along for the ride.

When the band first practice together, in front of an audience of one – Vince Neil's perplexed girlfriend – you get a real sense of how the four musicians gelled, and how exciting it must have been. When they play their first show, and start a fight with the audience, you're on their side. And at end of the film, when they've been through hell and back and it looks like everything's going to be alright, you can't help but feel they probably earned their success.

It's by no means perfect: Sixx being brought back to life in the back of an ambulance is almost played for laughs. The relish with which the camera portrays his drug use is odd. The death of Razzle is given a weird, psilocybin polish, as if to numb the absolute horror of the moment. Daniel Webber is uncharismatic as Vince Neil. And there are real issues with omission: whatever Nikki Sixx says about honesty, the book's most awful tales are not retold in the film.

But it's one helluva ride. In places it's laugh-out-loud funny. It's believable, in a way that many music biopics aren't. It's as good a film about appalling behaviour as you can imagine. If The Dirt had come out in 1986, I'd have loved it.

Three decades and more later, it hasn't changed my grown-up opinion of the band much. They're still arseholes.

But after all they've been though - the addiction, the tragedy, the relentless idiocy, the slings and arrows of a life led on tabloid front pages - The Dirt almost achieves the impossible: it wills you to like them, and it almost succeeds.

It's probably a better film than the band deserve.

The Dirt is available on Netflix now.