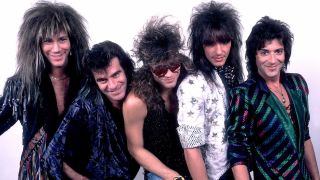 It’s easy to dismiss Bon Jovi as having long ago removed themselves from the rock universe. But that doesn’t disguise the fact that the New Jersey band have recorded some momentous songs. These 10, picked from their rich heritage, underline Bon Jovi’s right to be regarded as giants of rock.

The title track of their sixth album is cynical and dark – not what you might expect from a band who built their reputation on untethered optimism. But the world weariness is captivating, and showed the band were prepared to be a little edgier in their approach. The result is mature yet catchy.

From the album Crush, this is almost a rejuvenation of the band’s upbeat philosophy. With writing help from Britney Spears collaborator Max Martin, Jovi reference the characters Tommy and Gina from Livin’ On A Prayer, while Richie Sambora brings back the talk box. It all makes for an unexpected burst of effervescently convincing pop/rock.

Co-written with Desmond Child, Keep The Faith has an insistent, almost tribal rhythmic pulse. Lyrically, it urges everyone to see beyond the tough times, and to believe in basic principles. Given that Bon Jovi had just gone through a bad period on a personal level, this is effectively autobiographical.

From the New Jersey album, this is another collaboration with Desmond Child. It has all the hallmarks of being a continuation of the blue collar love story and struggles that pulsed through throughout Livin’ On A Prayer. It’s almost terminally optimistic, but has an articulate sense of perspective that makes it both real and insightful.

From the band’s sometimes maligned second album 7800 Degrees Fahrenheit, In And Out Of Love is a story of life on tour, albeit with a sense of fantasy. Its drips dynamic, propulsive tunefulness, and the monologue at the fade out is both hilarious and also a thinly veiled warning. Still a crackling road burner.

The first single from New Jersey shows the band could take the basic blueprint that had made the big hitters from Slippery When Wet so unforgettable, and add grit to the sheen. Co-written with Child, Bad Medicine has a great guitar performance from Sambora, and lyrics dealing with the allure of addiction.

One of the stand out songs from the breakthrough Slippery When Wet album, it features Sambora’s trademark talk box, an insistent bass line, and a Southside Johnny-inspired story about the struggles of Tommy and Gina. Just as importantly, it highlights Jon Bon Jovi’s ability to weave a tale of realism, based on his own observations.

The song that brought them to worldwide attention. It has a joyous rhythm, and it immediately marked out the band as being more than wannabes. Over 30 years later, Runaway remains one of their best and most popular songs, thanks to its nagging keyboard riff and instantly recognisable chorus.

The single that broke the band into the big time and crossed them over into the world of mainstream pop. Even those who claim to hate Jovi can’t help but sing along – it’s got the quality to get into your blood. And to think it was almost given to Bonnie Tyler.

The band’s most iconic statement. Intelligent and thoughtful, it uses a Wild West allegory to relate how it feels to be a nomadic musician. The whole arrangement is majestic and epic. Far from being superficial pop rock, this is the best reason why Bon Jovi should be regarded as a great band.