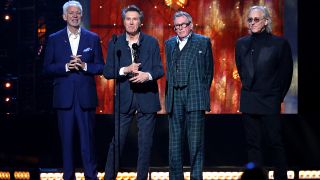 Last week, it was confirmed that Bryan Ferry would play with his Roxy Music bandmates Andy Mackay and Phil Manzanera at their induction ceremony into the Rock And Roll Hall Of Fame.

They were inducted on Friday night by Duran Duran’s John Taylor and Simon Le Bon, with Le Bon saying: “Over a 12-year span, they recorded eight studio albums, each one a masterwork, each one filled with moments that defy the dry eye.

“Always the experimentation, the drive, the humour, the articulate, versatile musicality. A body of work that fulfilled every promise of the electric rock era.”

In his speech on behalf of the band, Ferry called the recognition by the Rock Hall an “unexpected honour” and went on to thank the fans and “all the musicians, who played such an important part in the Roxy Music story, especially Paul Thompson, Brian Eno and Eddie Jobson, who’s here with us tonight.”

Ferry, Manzanera, Mackay and Jobson then took to the stage and played a six-song set featuring In Every Dream Home A Heartache, Out Of The Blue, Love Is The Drug, More Than This, Avalon and Editions Of You.

Footage of the last four songs can be watched below.

Eno and Thompson, who were also inducted with the rest of the band, couldn't attend the ceremony due to “other commitments”.