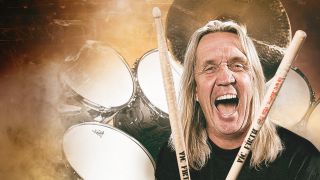 Nicko McBrain is the oldest member of Iron Maiden, the band he joined in 1982. “More than half my life I’ve been with Iron Maiden,” he laughs. “It’s part of my sinew.”

That booming laugh is emblematic of a larger-than-life persona common among rock drummers. On this level, he is, along with Bruce Dickinson, the biggest personality in Iron Maiden. There is, though, a complexity to McBrain. In 1999, he converted to Christianity following an experience he described as “a calling”. He refers to his faith as a private matter, and sees no conflict between this and his life as a rock star. He says that he gave up smoking dope – “wonga”, as he calls it – in 1986. But only now is he seriously considering giving up alcohol as the rigours of touring harden with age.

He calls from his home in Florida, near Fort Lauderdale, where he has lived for more than 20 years with his second wife, Rebecca. Unchanged by all those years in America is his blunt working-class London accent.

We all know what the two hardest jobs in a rock band are – Bruce’s and yours. How are you bearing up these days?

I’ve got to be honest, the older I get, the harder it becomes to do this. At least when I was drinking I didn’t feel it, except for the hangovers.

I feel good, actually. But I needed to start looking after my body a bit more. I’ve started to get a bit of arthritis in my hands. I’ve got to be fit. I’ve taken a lot of inspiration from the way that Bruce has fought his way back to health. He’s a strong man, Bruce.

Well, I’d be lying if I said I hadn’t feared the worst when they mentioned the C word. It was a very heavy time. For his family it must have been unbearable. But my feeling in my heart was, he’s such a strong guy, not just physically but mentally.

As a practising Christian, did you pray for Bruce?

I prayed every day for him. I believe in the good Lord, and my prayers were answered, as well as the prayers of everybody else.

Do you think the other guys in the band might have said a few prayers for him too?

I’m sure they did. Bruce also told me he was singing Heaven Can Wait in the shower, which is classic Bruce humour.

When Bruce was going through this, did you re evaluate your own life?

We’re mortals, and you do question your mortality when something like this happens. But he’s over the hurdle now.

Who in the band are you closest to?

At a pinch, I’d say Steve. He’s my confidante. If I have things I need to talk about, it’s Steve I turn to.

I hate to betray his confidence, but Steve says you’re the biggest moaner in the band…

Ha ha ha. You bastard! But I suppose Steve is right. I’m the one that moans and groans and flies off the handle. At the same time, I’ve always been the comedian of the band, the life and soul. But when I have an off day, yeah, I’m the moany one.

Steve and Bruce have had their differences in the past. What changed?

It’s like when two people fall in love, get married, then separate, and end up getting married again. There’s a love affair going on, and the sex is the music. It’s not a gay thing, don’t get me wrong. It’s a weird analogy! [Laughs] But that’s what I feel.

When you’re not working with Maiden, what do you do with your life?

I go out and twat a golf ball. And I have another band, The McBrainiacs. Funnily enough, it’s an Iron Maiden tribute band. We do a bit of AC/DC, Purple, Hendrix, but primarily it’s Maiden songs.

Do you think much about life after Maiden?

I’ve thought about it, I’ll admit that. But I can’t see us hanging it up any time soon. Let’s get one thing straight: we would never become a parody of ourselves. But it’s my job to drive Maiden, and one day I’m not going to be able to do it any more.

So, realistically, how long have you got?

Ideally… ten years? Nah, don’t see that. Imagine me trying to play Run To The Hills at fucking seventy-three years old! So I don’t know, mate. But I’m planning on bowing out gracefully.