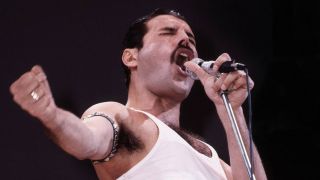 Queen's Live Aid performance in July 1985 may have clocked in at just 17 minutes, but they were 17 minutes which would both make rock history and transform the band for good. Though they'd enjoyed continued success with their platinum-selling 11th album The Works in 1984, as the mid-80s beckoned, frontman Freddie Mercury found himself disillusioned and searching for something new.

“We were all forming a sort of a rut," Mercury said at the time. "I wanted to get out of this last 10 years of what we were doing. It was so routine. It was like, go to the studio, do an album, go out on the road, go round the world and flog it to death, and by the time you came back it was time to do another album. After a while itʼs like a painter… you know, you paint away, and then you stand back and look at it in perspective. Thatʼs exactly what we needed. We just needed to be away from each other, otherwise you just keep going in that routine and you donʼt even know if youʼre going down.”

The answer, it turned out, was Live Aid. A benefit show pulled together by Bob Geldof and Midge Ure in aid of the Ethiopian famine, the concert – dubbed by the organising parties as "the day music changed the world" – brought together some of rock's biggest stars over two venues in London and Philadelphia. In a day filled with memorable performances – here's looking at you, Led Zeppelin – Queen's Live Aid performance truly stole the show.

The 50 best Queen songs of all time

We asked, you voted: here are the 50 songs Queen fans deemed champions of them all

Kicking off with an abridged version of 1975 mega-hit Bohemian Rhapsody, Queen's Live Aid setlist tore through a medley of their best-loved hits: Radio Ga Ga gave way to Hammer To Fall, before Crazy Little Thing Called Love, We Will Rock You and a rousing We Are The Champions closed their set. This was all before Mercury and guitarist Brian May stole the stage during the show's grand finale with their acoustic rendition of Is This The World We Created? – a moment on which Mercury later remarked: “It looks as if we wrote Is This the World We Created? for this event, but we didn’t, although it seems to fit the bill.”

The performance helped transform them into a wonderfully camp, sleek and ubiquitous rock band, and the biggest British live act of the 80s. That their Live Aid performance provides the start and end point of recent biopic Bohemian Rhapsody further illustrates the pivotal moment the band's remaining members feel it played in defining their career.

Admittedly, a renaissance of sorts had begun with the videos for The Works singles Radio Ga-Ga and I Want To Break Free. But it was their performance at Live Aid, where they were the only band smart enough to work out how to play all of their hits in miniature, that bought them back big-time – even though they hadn't appeared on the Band Aid single, and they had incurred the wrath of Steve Van Zandt after they played in Sun City in apartheid-era South Africa.

“I would have loved to have been on the Band Aid record, but I only heard about it when I was in Germany,” Mercury said later. “I donʼt know if they would have had me on the record anyway, because Iʼm a bit old. Iʼm just an old slag who gets up every morning, scratches his head and wonders what he wants to fuck.”

Before the Live Aid event, Freddie was clearer on his motivation for the show: “Iʼm not doing it out of guilt. Even if I didnʼt do it, the poverty would still be there. Itʼs something that will always be there, to be honest, when you think about it. All we can do to help is wonderful things. Iʼm doing it out of pride, pride that Iʼve been asked as well as that I can actually do something like that. And so basically Iʼm doing it out of feeling that one way all the hard work that Iʼve actually done over the years has paid off, because theyʼre actually asking me to do something to be proud of. Iʼm actually in with all the biggies and I can do something worthwhile. To actually sing something thatʼs an integral part of whatʼs going on, you know, and the song [We Are The Champions] seems to convey that anyway, without us thinking about it. Thatʼs whatʼs magical, and I think thatʼs going to probably bring tears to my eyes, I tell you, when I do it.”

Legend has it that Bob Geldofʼs invitation to Queen to play at Live Aid ran along the lines of: “Tell the old faggot itʼs going to be the biggest thing ever…” Freddie, naturally, found that irresistible.

“I think Bob Geldof has done a wonderful thing, because he actually sparked it off. Iʼm sure we all had it in us to do that, but it took someone like him to actually drive. And it is like a driving force, to get us all to come together. Weʼre going to do bits of Bohemian Rhapsody [but] basically, youʼre not trying to put across your new material or anything like that, youʼre playing songs that people identify with, and just make it a happy occasion. Itʼs not a promotional thing, itʼs a thing where you just have sit back and think what you can do.”

It was Geldof who best summed up the mood of Live Aid 1985 and Queenʼs impact on it. “Queen were absolutely the best band of the day,” he remembered. “They played the best, had the best sound, used their time to the full. They understood the idea exactly, that it was a global jukebox. They just went and smashed one hit after another. It was the perfect stage for Freddie: the whole world. And he could ponce about on stage doing We Are The Champions. How perfect could it get?”

Freddieʼs long-term lover, Jim Hutton, had never been to a gig before Live Aid. In his memoir Freddie And Me he described the aftermath of Queenʼs all-conquering Live Aid performance on that historic day at Wembley Stadium: “When he came off, he rushed to his trailer and I tottered behind like a puppy. His first words were: Thank God thatʼs over!ʼ Joe ripped his wet clothes from him and dressed him. Adrenalin still overflowing, Freddie knocked back a large vodka to calm himself. Then his face lit up. As we stepped out of the caravan we met a grinning Elton John. “You bastards…” he said to Freddie.

Mercury was so good that day that the Royal Mail put him on a commemorative stamp. Just visible behind him in the Peter Blake design is Roger Taylor, who, given Freddieʼs more exotic origins, became the first living Englishman ever depicted on a British postage stamp.

Queen rotated around the stadiums of the world after Live Aid 1985. After their jaded years, they enjoyed an Indian summer of a career, having cemented their place as one of history's true great rock'n'roll bands.