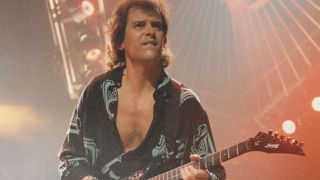 So there we were, about to bring you one of the earliest live reviews of ARW, when Hurricane Matthew slams into Florida and ARW have to cancel the very gig we were going to review. That’s now been rescheduled for October 12, but in place of our original idea, we decided to come up with our call on the ten best Trevor Rabin-era Yes songs. Or Yes-West, as some prefer to call them.

Rabin’s impact on Yes was immeasurable. As a writer and guitarist he made a big difference to the way he band sounded on 1983’s 90125, helping to give them a contemporary commercial credibility. This extended to the Big Generator album in 1987, and later he you can hear his influence on 1991’s Union and Talk three years later. He had an innate appreciation for the best way to combine sophistication, melody and musicianship – the perfect balance for Yes. He helped to put the band’s sound into a more modern context, in the process giving them a new audience, as well as satisfying older fans.

A somewhat sombre song about homelessness, it was co-written by Rabin and Chris Squire. Rabin and Jon Anderson complement each other on lead vocals, and there were wonderfully crafted harmonies. The presentation was low key and dark, yet also wrapped around an insistently evocative tune, and a powerfully virtuoso Rabin guitar solo. It was one of the best examples of how the various musicians involved with this project could combine their talents to great effect.

Walls (from Talk, 1994)
Co-written by Rabin with Roger Hodgson, this was a big hit for the band. You can tell why, because it was a lush, stylish song full of energy and passion. Rabin’s guitar work and production were peerless, while Anderson’s vocals were woven in and out of the mix, linking neatly with Rabin and also keyboard player Tony Kaye. Prog goes pop, in the finest sense.

There was a sparse feel to this track that fitted the subject matter, namely war. It built slowly and mournfully, with Anderson and Rabin sharing the lead vocals. The former was singing in real time, while the latter was in what’s described as dream time, The atmosphere was doused in an ominous sense of abandon, heightened by Alan White’s percussive eeriness and some stark guitar flicks from Rabin.

This was Yes straying right into AOR territory, on a song that has much in common with early Asia. Despite this song having an obvious connection to what was going on in the charts at the time, Yes never lost sight of their own instincts, allowing everyone involved to sound natural and committed. A fine example of the way Rabin’s talents were put to impressive use, without undermining the essence of what made Yes so crucial.

One of the earliest songs written by Rabin with Squire, this was eventually adapted for Yes, with Anderson adding in his own inimitable touches. Interestingly, dialogue from the Oscar Wilde play The Importance Of Being Earnest was used in the lyrics. But the overall impact was of firmly blazing guitar riffs acting as a counterpoint to some surreal charms from Anderson. It was proof that old school Yes didn’t need to be totally abandoned to make it relevant to the 80s.

A hark back to the golden 70s era of the band, as everyone involved here gave an eloquent representation of their capabilities. It was an epic that stretched out and gave free rein for spontaneous touches, while never losing its discipline. Here was progressive music that had elements from the past, but belonged irrevocably to the present. Far more than a nostalgia trip.

The centrepiece here were three part vocal harmonies from Rabin, Anderson and Squire, across which Rabin kicked up some heavy guitar moments. This song wreaked of a modern approach , yet while studio technology was used to maximum advantage, it was never allowed to overshadowed the essential humanity of the track. A bold example of how to be right up to date without losing musical perspective.

On the surface, this was a really good pop rock song. But what propelled it to another dimension was the brilliant way in which the band interacted, using their prowess to create a near five minute symphony. Everything people loved about the band was here in microcosm, but presented in such a way that the song is never overshadowed by the content.

The basic song was written by Rabin before he joined Yes. It was then adapted for the band. There’s a strong hint of tribal formality in White’s rhythmic approach, and Anderson’s vocals are both harmonious yet also distant. The jazzy inflections gave the song a surreal appeal that’s timeless. Ultimately, it was a song important to Yes being viewed as having value in the 80s, while never forgetting their own heritage.

The song that was the defining song on the album which revived the band’s fortunes. Rabin had initially written and demoed this in 1980, but nobody saw its potential until Yes decided to rework it for 90125. The result? Not just the track that brought Yes back into commercial focus, but remains one of the greatest songs of the decade. Melodic, intricate, quirky and utterly compulsive.