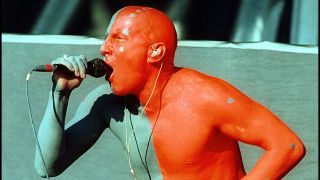 It makes sense that Tool never bothered streaming their albums. Spotify was a mere glint in the eye of its developers when the band last released an album, and it hadn't been long since Metallica had pretty much single-handedly brought down Napster. Rock'n'roll wasn't on the greatest of terms with music's digital future.

Plus, as proud contrarians, Tool have always relished going against the grain in their role as perpetual outliers. Making it easy to hear their albums? Nah. Not their style. If you want to hear them, commit to it. No half measures.

Now, that's all about to change. To mark the release of recently-announced fifth album Fear Inoculum, Tool have announced that all of their back catalogue will be hitting streaming platforms.

Chances are, unless you're one of the people who have invested in their physical back catalogue over the years, it's been a while since you've heard a Tool album as it was intended to be heard. That's where we come in. To celebrate the albums hitting streaming platforms, we've gone through each one to jog your memory and guide you through where you might want to pick up your listening journey.

Sparse though their back catalogue may look for a band who have been in action for so long, few have even come close to matching Tool’s consistent level of output. Here we talk you through each masterpiece in order of, always sky-high, quality.

Compared to Tool's alt-metal peers of the time (Rollins Band, Helmet, Prong, Kings X etc), Opiate shows a band with their own unique flavour, without giving away any clues to the world-class works of art they would release further down the line. Songs like Sweat and Hush are rhythmically bewildering beauties, but the real treats are the live songs, particularly the grinding Cold And Ugly, which showcases both Maynard James Keenan’s spectacular vocal prowess and dry sardonic sense of humour. An impressive start, but dwarfed by what came later.

A continuation of what came before on Opiate but with a sicker, darker and more menacing tone; Tool’s debut full-length album saw the band begin the process of pulling away from the rest of the scene around them. They received plenty of attention for the catchy, growling groove of Sober, but it’s the likes of Bottom (featuring a contribution from Henry Rollins) and Flood that show the direction that Tool were moving into. Technically precise with more patience and musical subtlety, while still delving deep into the more perverse aspect of the human psyche, Undertow is a hell of a statement from a band growing in confidence.

The reason that 10,000 Days isn’t held up as a genuine masterpiece of this millennium and instead viewed as a disappointment by some is purely due to the length of time it took to arrive, and the album that it had to follow. Surely if any other band were to release a song as bewitching as The Pot or as huge as Vicarious we’d be carrying them around on our shoulders and lauding them as kings. As it is, this is seen as the album where Tool took their cues from the technical fluidity of Meshuggah, but listen to the cinematic journey of Lost Keys (Blame Hofman) into Rosetta Stoned and you’ll hear that is an over-simplification of yet another stunner.

The first Tool album to be recorded by the classic line up, with former Peach bassist Justin Chancellor joining the band for the first time, was to be the record that really established the band as genuine one-offs. Aenima is the first time where Tool sounded like nobody else but Tool. Weird, esoteric, sarcastic, unsettling, progressive, complex, involving... it is a masterclass in teasing the listener and keeping them on their toes. Stinkfist was the big single, but the nine-minute build of Eulogy (going from two notes to a wall of furious noise) or the psychedelic nightmare trip of the closing Third Eye (possibly their finest song) really showed the world the real Tool for the first time.

Put simply, Lateralus is one of the greatest records of any genre ever created in the long history of popular music. A genuinely faultless near 80-minute-long piece of music that still sounds like it’s been created by some kind of higher power, even 17 years after it was dropped on an unsuspecting world. From the second that The Grudge kicks into gear, it's hard to fathom where to start with high points, let alone entertain the idea that Lateralus drops anywhere below perfect at any point, but the swaying ocean of the title track or the measured post-prog metal machinations of Parabol and Parabola would be two moments that immediately spring to mind. A landmark band's landmark release. And a genuine classic.