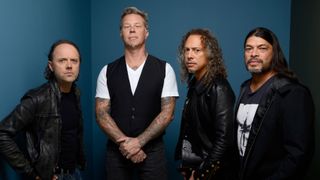 Metallica released their last album, Death Magnetic, in the autumn of 2008. Over the last few years, we’ve been monitoring the four-piece like a neighbour with twitchy curtains. In the interim, we’ve witnessed Metallica-curated festivals, a feature-length film, countless festival shows, EPs, anniversary shows and filmed visits to the studio.

With Metallica’s new album, Hardwired… To Self-Destruct set for release on November 18, here’s a painstaking account of what’s happened in Metallicaworld in the past 7 years, 11 months, and 26 days since Death Magnetic hit the shelves…

A shop in France sells Death Magnetic two weeks ahead of its official release date. Within hours, the album is freely available on the internet. Mais non!

Despite the cheeky leak, Death Magnetic debuts at number one in the U.S., selling almost half a million copies during its first week. The album begins its residence at the top of the Billboard charts for three weeks.

The band kick off their World Magnetic tour in Daly City, California.

Metallica announce that they’re to be inducted into the Rock and Roll Hall of Fame in April.

Metallica are inducted into Rock And Roll Hall Of Fame in Cleveland, Ohio. Former bassist Jason Newsted performs with the band, while Cliff Burton’s parents are present to see their late son posthumously inducted.

At Warsaw’s Sonisphere festival Metallica, Slayer, Megadeth, and Anthrax – thrash metal’s the ‘Big Four’ – appear on the same bill for the first time ever.

Death Magnetic is certified double platinum by the RIAA. Take that, internet.

Metallica release a live EP titled Live at Grimey’s. The nine-song album was recorded in the basement of a shop on June 12, 2008 in Nashville, the night before their appearance at the Bonnaroo festival.

There’s talk of the band working on a new album. Lars Ulrich tells the Pulse Of Radio: “There’s a bunch of balls in the air for 2011, but I think the main one is we really want to get back to writing again.”

The band headline The Big 4 festival at the Empire Polo Club in Indio, California. Robert Trujillo reveals the band will record their new album with Rick Rubin. “There’s no shortage of riffage in Metallica world right now,” he says.

Rick Rubin reveals the band have started work on the follow-up to Death Magnetic. In an interview with Billboard, the producer says: “I had a meeting with Lars in San Francisco to explore what the focus was going to be this time around. I’m still thinking about what that is going to be. I’ll ask a lot of questions and we’ll listen to the riffs that they’ve been writing.”

The Big Four play at Sonisphere at Knebworth.

The Big Four make their way to Yankee Stadium in New York City. Go Yankees! And thrash, of course.

Rob Trujillo divulges some more information on the new album. “We’ve been in the studio with Rick Rubin, working on a couple of things, and we’re going to be recording during the most of next year,” says the bassist. A new album is surely on the horizon.

Lulu, the band’s collaboration with Lou Reed is released and met with mixed reviews.

Metallica celebrate their 30th anniversary with a series of four shows at The Fillmore in San Francisco. They’re joined by Jason Newsted, Dave Mustaine, Ron McGovney members of Black Sabbath, Saxon, Diamond Head and more. Tickets cost around $6 to Met Club members. The rest of the world looks on with envy.

The band release a four-track digital EP Beyond Magnetic. A CD follows a month later.

Metallica reveal details of their very own music festival called Orion Music + More, which is set to take place in Atlantic City in June.

The band play The Black Album in its entirety at Download Festival, Donington.

The band’s two-day festival Orion Music + More takes place in Atlantic City. The band perform Ride The Lightning and The Black Album in full over the two nights.

Another morsel of album news from Lars: “Every time James Hetfield picks up a guitar, there are some brilliant riffs that come out of it. I try to make sure that they are all recorded and try to do my best to keep up with them and try to put some drums in behind them.” There’s talk of the album being released in 2014.

Metallica leave Warner Brothers and set up their own label. “Forming Blackened Recordings is the ultimate in independence, putting us in the driver’s seat of our own creative destiny. We’re looking forward to making more music and getting it all out to you in our own unique way,” reads a statement on the band’s website.

Ulrich tells Classic Rock about their new album’s progress: “What we’re doing now certainly sounds like a continuation [of Death Magnetic]”. He also said, “I love Rick [Rubin]. We all love Rick. We’re in touch with Rick constantly. We’ll see where it goes. It would stun me if the record came out in 2013.”

The second Orion Music + More kicks off at Belle Isle Park, Michigan. Metallica play a surprise early afternoon slot as ‘Dehaan’ (a nod to Through The Never star Dane Dehaan) and play Kill ‘Em All in full.

The band play San Diego’s Comic-Con in the run up to the release of their concert film, Through The Never. Ulrich tells reporters: “2014 will be all about making a new Metallica record… In about another year and a half you’ll probably see one.”

Through The Never is released in cinemas. “Essentially what we have here is every single idea inside the band’s collective heads crammed into each frame of its 90-plus minutes,” wrote Metal Hammer’s Stephen Hill.

Metallica travel almost 8000 miles away to the South Shetland Islands of Antarctica to a play a gig to a handful of people. The show, which takes place inside a plastic igloo, is dubbed Freeze ‘Em All. To be fair, it looked brass monkeys.

The band rock up to the 56th Annual Grammy Awards to perform a rearranged version of One with Chinese pianist Lang Lang.

New music! Metallica release a digital download of the song Lords of Summer ahead of their Metallica By Request tour.

Lars appears in a Carlsberg-sponsored film about his life and career with Danish 2014 Academy Award winning film maker, Anders Walter. It coincides with the beer’s Stand Out Collection of limited-edition bottles designed by outstanding Danish artists and celebrities. Thankfully, it has English subtitles - our Danish is very limited. Skøl.

An online campaign is launched to have Metallica removed from the Glastonbury festival bill because of frontman James Hetfield’s interest in hunting.

“We have one shot, you never know if you’ll be invited back,” says Ulrich ahead of their Glastonbury slot. The band even took the chance to rail against their detractors with an introductory hunting-themed video, produced by the acclaimed British film maker Julian Temple. Zero. Fucks. Given.

The band appear at a ‘Tallica-themed evening at the home of ice hockey team San Jose Sharks, featuring a Q&A session and a charity auction.

The band host their third annual Metallica Day at AT&T Park, the home of the San Francisco Giants. The fixture saw their hometown team face the Los Angeles Angels. The Giants won, possibly spurred on by the thought of a new Metallica album.

24 hours before Superbowl 50, Metallica perform a show at the Giants’ AT&T Park billed ‘The Night Before’, with support from Cage The Elephant.

Deep Purple are inducted into the Rock And Roll Hall Of Fame. Lars Ulrich, a lifelong fan, takes to the stage to make a speech.

Ulrich drops another album hint, this time to Rolling Stone: “The record is well on its way. It may come out any century now, actually. We have all these sort of different things that we turn to. But the record gets worked on where there’s absolutely nothing else going on.”

In celebration of Record Store Day, the band play an inimate show at Berkeley’s Rasputin Records on Telegraph Avenue. Ulrich reckons that the album will be ready any minute now: “Unless something radical happens it would be difficult for me to believe that it won’t come out in 2016”. Sounds hopeful.

In a move that suggests that they’re finished in the studio, Metallica reveal they’ve been working with the Brioni designers for their latest clothing range. “We are beyond thrilled to have been invited to be the face of Italian luxury menswear powerhouse Brioni,” say the band, looking all swanky.

Finally! Metallica reveal that their 10th album will be called Hardwired… to Self-Destruct and will be available on November 18. They add that Greg Fidelman produced the album and throw in the title track for good measure. The internet falls over.

There’s a clip of a new song called Moth Into Flame. It sounds like a band firing on all cylinders.

Former Metallica bassist Jason Newsted announces that he’s in talks with the band about a possible collaboration – although he’s remaining tight-lipped at present.

Metallica post details of a five-date Latin America tour. The rest of the world eyes that part of the world with envy. Chin up. There’s not long to go now…

Metallica’s Hardwired… To Self-Destruct will be released on November 18.