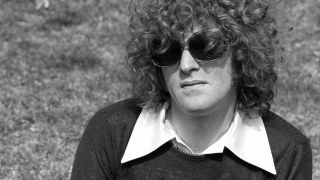 “I started young,” reveals Ian Hunter, gesturing toward the scrap of paper in front of him upon which he’s scribbled, crossed out and ultimately re-scribbled, ten (well thirteen, if we’re being picky) existence-defining song titles.

“I’ve gone right back to when I was living at home with my mum and dad.” And indeed he has. In order to populate the top of his list of the great, the good and the bleeding obvious, the ex-Mott The Hoople dude-wrangler has delved way, way back into his 77-year history. Back to a monochrome pre-rock epoch when harmonica gangs walked the barely-cooled Earth and Mayfair’s Berkeley Square rang to the song of the nightingale and the wracking cough of the smog-lunged spiv.

Below, he chooses the 10 Songs That Changed His Life.

“You know the sort of song that sticks in your head and you can’t get rid of it? That’s Blue Tango. This is from when I was a kid. It’s a harmonica thing which I chose because I was in a semi-pro harmonica band back before rock. That’s how I started: playing all different harmonicas; the chords and the bass.”

“Another one of those songs that they played on the radio all the time when I was a kid that I just couldn’t get out of my head. This was way before rock ‘n’ roll arrived and changed everything. A Nightingale Sang In Berkeley Square was just a gorgeous song, I actually did a version of it myself for a while.”

“It was originally done a couple of years before by a woman called Big Maybelle, Jerry Lee completely picked it apart, rearranged it, and it’s totally different. Interestingly, the Big Maybelle version was mixed by Quincy Jones, the guy who worked with Michael Jackson for all those years. Small world, innit?”

“I’ve gone for that one, but really I could have gone for absolutely anything by Little Richard. He was the guv’nor, no doubt about it. That voice? I’ve never heard anything like it. And he’s still very much with us. Last I heard he was in L.A… Not bad for a dishwasher from Macon, eh?”

“Again there’s a lot to choose from here, but I’d have to include something by Chuck and it would have to be this or Little Queenie. He was a huge influence on my songwriting, those narratives in his songs. He was a little bit older than the rest of that first generation of rock’n’rollers, well together and a very clever guy too. No angel, but a great lyricist, great singer and great guitar player, when he felt like it.

“A backing band was always part of his rider, he never travelled with musicians. You had to pay him before he went on, and if you short-changed him, he walked. If they tried to change the billing on him when he got there, off he went. His rider included a Ford Mustang RTD at the airport, which he drove, two cops on bikes, it was a very strange rider, and part of it was the band. Steve Holley, my drummer in The Rant Band, played with him maybe seven or eight times, and it was the eighth time before Chuck said: ‘I know you’.”

Lorraine Ellison – Stay With Me (Baby)

“This is my all-time favourite. She only did two albums and then she went back to Philadelphia to look after her mum, who was sick. This was from the first one. The story goes that the studio was booked, with a 48-piece orchestra, for Frank Sinatra, who walked out in a rage over something, and left all these musicians sitting doing nothing. So Jerry Ragovoy, who’d co-written the song, quickly did an orchestral arrangement and recorded Lorraine Ellison’s version with Frank’s orchestra.

“She just went in there and did it, and it’s just incredible. That’s the only orgasm on record I’ve ever heard. It’s thoroughly amazing the way she sings that, and God bless ‘em, though there’s been a few covers, I would never… Don’t cover that.”

“Such a quality song. The chords are simple, and they’ve been done a million times, but it’s just handled so differently. It’s such a clever song and so well recorded. And the video was great. I love all that stuff he did with The Power Station.

“He really was quality too, that guy, a great quality singer. He’s often overlooked, but I don’t know that he never wanted the fame that badly, but that song is amazing to me, as a writer. The way he sang it, the way it was played, the drummer was Tony Thompson, I’m told they had to edit the shit out of him, but I love his drumming. It’s very angular. And very odd… Maybe because it’s been edited so much (laughs).”

“It could be anything by Bob Dylan really. I’ve also got down Jokerman. I couldn’t say what it was that grabbed me about Dylan. It was back when I was still in England. I heard him and… that’s it. I didn’t know what he was talking about, his voice was completely wrong for the time, but for me it was just like, that’s it, right there.

“I don’t know how I knew, I just knew, and masses of people agreed with me, I don’t know what it was that he had, but he had plenty of it, and I knew straight off; the look of him, everything about him, the voice. Everything.”

“It’s the song that’s got this absolutely amazing riff at the start that just goes nowhere, and it’s like, why did he do that? (sings the riff) It must have come to him in a dream or something, because you just don’t do that. Brilliant. And I just love Jagger’s voice, I love the way he sings, the way he is… Such a brilliant frontman.”

The Platters - Only You

“It was number one twice in one year, The Hilltoppers version also topped the charts, which is kind of neat… To be honest, I’ve got four songs down for number ten because I couldn’t make up my mind… So as well as The Platters there’s The Everly Brothers’ Cathy’s Clown, Van Morrison’s Madame George and Jesse Winchester’s Silver Box. I love all of them and can’t really choose between the four… Tell you what, you pick one.”