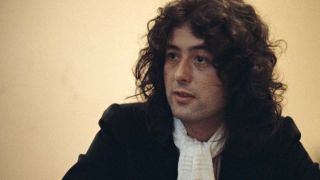 Talk to any guitarist, and there's every chance they'll talk about Jimmy Page.

"Jimmy Page’s riffs, his arrangements, his production – such overall talent," Deep Purple's Steve Morse told us. "But he also had a lot of restraint. He didn’t pile everything on all the time; he would bring something in here and there, steel guitar parts, and put it all together in just the right way."

"From the moment Jimmy Page’s solo on Heartbreaker came on, that was it for me," says Steve Vai.

"With Jimmy it’s all about the construction of the solos and the way they pay off," adds Joe Bonamassa. "He’s such an inspired and inspiring player."

"I wanted to sing like Rod Stewart," says Sammy Hagar. "And I wanted to play guitar like Jeff Beck and Jimmy Page"

And any music fan, whether they're a Zeppelin fan or not, will recognise Whole Lotta Love or Stairway To Heaven from the opening notes. But there's a whole catalogue to explore, and here are 10 of Jimmy's finest – but less frequently celebrated – moments.

Led Zeppelin - How Many More Times

There are more famous songs on the first Led Zeppelin album, but are none more powerful than its final track, on which Page lays down the law with a pulverising riff and electrifying improvised solos. For one famous Zep connoisseur, Rush guitarist Alex Lifeson, How Many More Times is the mother of all Zeppelin songs.

Written and recorded in the 1930s by Robert Johnson, the Mississippi bluesman whose death at 27 gave rise to a myth of a Faustian pact with the devil, Travelling Riverside Blues was imaginatively reinterpreted by Zeppelin in 1969. With Page dazzling on 12-string guitar, this is the funkiest song Zeppelin ever recorded.

On Led Zeppelin III, Page’s love of folk music informed gentle songs such as Tangerine and also in Friends, an acoustic-based track with a heavy atmosphere and power. His genius as a producer is in the dramatic segue from Friends to the hard riff of Celebration Day, with Moog synthesiser droning like an incoming WWII bomber.

Although Page has played on records by a number of artists over the years – including The Who, the Stones and Joe Cocker – his relationship with folk rock maverick Roy Harper ran deeper, across several albums. Twelve-minute epic The Same Old Rock, from Harper’s 1971 classic Stormcock, includes wonderful playing from Page – credited as S. Flavius Mercurius.

What Page created in this elegiac piece from Physical Graffiti was a track so deep that another famous Zeppelin fan, producer Rick Rubin, said: “It sounds like nature coming through the speakers.” Ten Years Gone is the most melancholy of Zeppelin songs, and for the guitarist the track is a masterpiece of emotional control.

With a duration of just over two minutes, Bron-Yr-Aur is the shortest track ever recorded by Zeppelin. It’s also the most beautiful. A bucolic instrumental piece, performed solo by Page on acoustic guitar, it was named after the cottage in Snowdonia used as a songwriting retreat by him and Robert Plant. Originally recorded in 1970, the track was eventually released five years later on Physical Graffiti. Not to be confused with the altogether livelier Bron-Yr-Aur Stomp from Houses Of The Holy.

Led Zeppelin - For Your Life

From Zeppelin’s 1976 album Presence – widely underrated, but loved by Page – For Your Life was, the guitarist recalled, “made up in the studio, right on the spot”. Page’s heavy, sluggish riff has a sleazy quality matched by Plant’s drug-referencing lyrics. Zeppelin performed the song live for the very first time at London’s O2 in 2007.

The sound of Led Zeppelin was born out of electric blues, and that was how the band’s recording career ended – with the final track from In Through The Out Door. Although John Paul Jones was the song’s primary writer, I’m Gonna Crawl is lit up by some of Page’s most emotionally charged guitar playing.

On the 1985 debut album by The Firm, the supergroup led by Page and singer Paul Rodgers, Midnight Moonlight was the grand finalé. Developed from an unreleased Zeppelin track, Swan Song, it moves gracefully through nine minutes, elevated by Rodgers’s soulful vocal melody, and quiet passages in which Page’s playing is spellbinding.

Jimmy Page - The Only One

Outrider, released in 1988, is Page’s only solo album (film soundtracks excluded). Among the guest stars – singers Chris Farlowe and John Miles, drummer Jason Bonham – was Robert Plant, who co-wrote and sang The Only One. With Page’s masterful riffing and Plant’s signature voice, it’s like Zeppelin reinvented for a new era.

When Page teamed up with Whitesnake’s David Coverdale for one album, released in 1993, the unlikely union prompted the tongue-in-cheek headline: ‘It’s Led Snake!’ But with Shake My Tree, the first and best track from the Coverdale Page album, Page’s brilliance – as guitarist and an arranger – carried echoes of his best work with Zeppelin.

Page and Plant’s 1998 album Walking Into Clarksdale was a big deal: the first full album they’d made together since 1979. But if it was not the classic that fans had hoped for, there was, in Most High, a heady whiff of Kashmir, with its exotic Middle Eastern textures and Page’s driving, hypnotic riff.