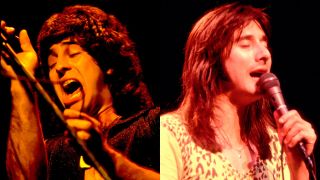 Journey’s transformation from jazz-rock noodlers into the hard rock behemoth behind Don’t Stop Believin’ coincided with the arrival of singer Steve Perry in 1977.

But Perry wasn’t the band’s first lead singer. He was briefly preceded by Robert Fleischman earlier that year, recruited by Journey’s manager, Herbie Herbert, to give the largely faceless band more of an identity.

Fleischman’s tenure in the band lasted a matter of months. He left after clashing with Herbert, who described the singer as “a pain in the ass – a pampered poodle of person.”

But Fleischman still played a significant part in Journey’s – pardon the pun – evolution, co-writing future hit single Wheel In The Sky, a song that helped point the band in a bold new direction.

After he parted ways with the band, Fleischman ended up singing on the first album by ex-Kiss guitarist Vinnie Vincent's band, the Vinnie Vincent Invasion before embarking on a solo career. He hasn’t been written out of Journey’s history, but he the part he played in their reinvention is often overlooked. Here, he shares his memories of his time in the band, and the part he played in laying the groundwork for his successor, Steve Perry.

How did you join Journey?

Robert Fleischman: “I guess Journey wasn’t doing too well at the time, and bands like Boston and Foreigner were becoming popular. So to fix Journey they decided to add a lead singer. That was the formula.”

Were you made to feel welcome in the band?

“Yes, they were very nice to me except when we were on the road. They let me know that I was getting it easy because they had worked so hard to get to where they were at before I joined the band. Still, it was great to be in a group that was so well organised. Gregg Rolie was the most generous to me. He let me stay in his house; it was nice. Management – that was another story.”

What do you remember about touring with Journey in 1977?

“We started in Texas for some practice shows and played with REO Speedwagon and Judas Priest. Later on we opened up shows for Emerson, Lake & Palmer in Canada and some dates in the USA.”

What was the reception like from the fans at live shows?

“The band would do about three or four songs, then they would introduce me. The front row was always diehard Journey fans and they would flip me off and say, ‘Fuck you!’ It was hard for them to see a frontman in the band so every time I got up on the stage that’s what I was up against. But at the end of the show we won them over.”

Did Neal Schon have specific ideas about what he wanted from you as a vocalist?

“No, there were no demands, plus they had never played with a lead singer and songwriter before. I think it was a big education for the both of us. At that time they were the rock fusion band and I was a pop songwriter, but it worked.”

What do you remember about writing Wheel In The Sky, which ended up on Journey’s 1978 album, Infinity?

“Neal and the band had the music already; I came up with the melody. One day I was given a poem that was written by Ross Valory’s wife, Diane. So to make everyone happy I plucked out the line ‘wheel in the sky’ and then I wrote the rest.”

What was your relationship like with Journey’s manager Herbie Herbert?

“I liked Herbie but later I found out he didn’t like me. He thought I was cocky. But name me one lead singer who’s not a little cocky? I was always professional, but I do think he was a great manager. He was ambitious, he put the band on the map, he sold them like a candy bar. Who wouldn’t wanna manager like that?”

What ended your tenure in the band?

“Like any relationship you want out of, it’s always a personality difference that’s the excuse. I heard later the band was mad at him [Herbie Herbert] for squeezing me out.”