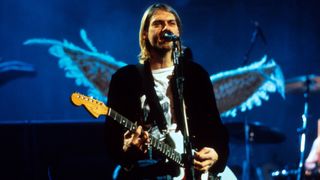 Despite the public perception, in my mind, Kurt Cobain will always be just a guy, no different to anybody I’ve been in bands with before. And he was actually a pretty quiet guy compared to most friends I’ve ever known.

I think Kurt was a great songwriter, because it’s not easy to take something simple and make it sound interesting. If you can put together a song that has three or four chord changes in it and keep people interested, that’s a trick. It’s a trick to make things simple sound good. And one of his best qualities was his writing. And just musically, but vocally; he had great vocal melody ideas. And that to me is key, in any good songwriting. You can have a really cool-sounding song, but you also need a really good vocal melody. He was really good at coming up with that sort of stuff in Nirvana.

Another thing I liked about his songwriting is he would say what he had to say, and if the song went on longer and he didn’t have any more lyrics to it, he wouldn’t push it and try to think of more stuff to sing, he’d just repeat what he’d written, which is exactly what I’ve always done.

I think Kurt was a lot of time just thinking about things that rhyme. There was one time we were on tour and he was writing some lyrics. I can’t remember what song he might have been writing lyrics to at the time. He just looked up and said, ‘Hey, what rhymes with monkey?’ Just looking for some rhyme to fit. It was like putting the little pieces of the puzzle together. I know he had an objective of what he was trying to say, but he had a very abstract way of saying it. And whether the lyrics actually made sense to anybody else or not, I don’t know if that really mattered to him.