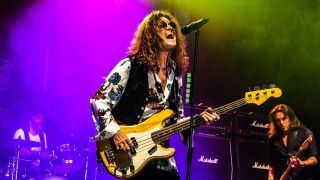 "I first toured Classic Deep Purple Live in Australia and New Zealand last year and it went down a storm," says Glenn Hughes. "We are looking forward for a second round in the UK in November.”

Hughes' tour begins at the De La Warr Pavilion, Bexhill on November 16 and winds up almost two weeks later at the O2 Institute in Birmingham on November 29 (tour poster with full dates below).

And it's been a long time coming. Back in May Hughes called off the scheduled dates due to illness. But now he's back, fully fit, and rearing to go.

The set comprises material from the California Jam and Made in Europe era of Deep Purple, and the audience will be treated to classics like Burn, Stormbringer, Might Just Take Your Life and Mistreated. They'll also hear tracks not usually associated with Hughes's tenure in the band, like Highway Star and Smoke on the Water.

"I did play both these numbers during my time with Purple and they were mainstays of the live set when I was in the band," says Hughes. "As my manager pointed out to me, the first time Smoke on The Water was ever played live at Madison Square Garden was when David and I were in the band in 1974."

Tickets are on sale now. Below, Glenn picks 10 Records That Changed His Life.

Jimi Hendrix Experience – Are You Experienced (1967)

"Ritchie Blackmore always said that Jimi Hendrix, like Bob Dylan, wasn’t a vocalist – more an interpreter of his songs. But his guitar style made him unique. Jimi’s heroes were the old jazz and blues guys, Hendrix invented it all. If you saw him onstage your life would change.

"I was never in fear of the Hendrix’s greatness, I was just grateful that he opened the door for us all. He was gentle and so kind and he played with such fire. There will never be anyone like him again."

"I was still at school when this album came out and by then I was playing guitar. Sgt Pepper… really did me in; the songs, the melody, the drama of it all. Paul McCartney’s bass playing is incredible.

"Some people have said that the album represented ground zero for rock music, and I would go along with that. The band had already released some great stuff already, but it spoke to me so clearly. Who knew they were capable of making a record so life-changing?"

"I love the voices of the three guys – their blend of their harmonies. Crosby, the mellow hippy, and Stills, aggressive one, and then Graham over the top… Oh my god, stunning. Remember, I’m the dude that likes rock music with a black funk swagger, but throw in CS&N and you get what makes me."

"I was out in the audience when we [Trapeze] opened for them at Wolverhampton Polytechnic and I’ll Be Creeping made me so excited; Andy just held down the groove down so insanely. I befriended him four or five years before he died.

"Backstage at Wembley Arena at the Marshall Anniversary concert [2012] I hummed the riff to him and he went, ‘What song’s that?’ I was incredulous: ‘You turned my life around with that song… it’s what made serious about being a bass player!’"

"Trapeze played twice with The Who. Keith Moon was on fire, and John Entwistle really shone; the tone of his bass playing is immaculate, but it’s a pointless to break things down because Live At Leeds is just the greatest, most ferocious and bombastic live album I’ve ever heard. Buts it’s also animalistic and sexual – everything that I hoped that I myself would turn out to be."

"Stevie Winwood and I both grew up in the midlands. I was mad about his earlier band the Spencer Davis Group, but Traffic really hooked me in. I adored his Hammond organ playing and the subtlety and drama of his voice. Not many people would know that Stevie was a huge influence upon me whilst I was in my mid-teens, and he continued to be so all though my twenties and early thirties."

"Bonzo [John Bonham] played Harvest over and over and over again while I was at his house and I grew to love it. I moved to Laurel Canyon in LA partly to get close to where those [singer-songwriter] guys were all based. It was sacred ground and I wanted to be where Joni [Mitchell] lived. I’d like to think it rubbed off on me – I’m a student of the human voice."

"If the Beatles represented my teenaged, rebellious years then Stevie was a manhood resurrection from that. With his music I felt was though he was talking directly to me, tapping into my soul – I genuinely did.

"I spoke to Stevie about that album many times. It has so much influence upon not just myself but the entire pop, rock and R&B family. It’s a genius piece of work from by a wonderful human being."

"David wrote that album in my house, so I was privy to its songs coming together. I got a sneaky peek into his world. The way the album begins [with its title track] is so… feral.

"Bowie was an incredible actor; the Bowie that was on the stage wasn’t the guy that I knew. He left that persona up there. During the creation of Station To Station we were addled, out of our minds. How the hell did he make it?"

"By the time I heard it Grace had been out for a year or so but I played it in the car almost non-stop. Jeff had no fear; he played these weird chords, but his melodies were off the chart. His music was brilliant; addictive, insanely good.

"And it was sad that his genius was taken from us so early. He should be in the Rock And Roll Hall Of Fame."