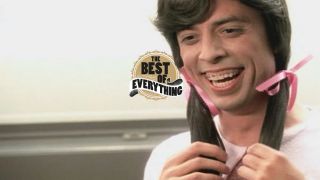 For the last two decades, Foo Fighters have used the necessity of music videos as an excuse to muck about.

WHITE LIMO (2011)
Shot on VHS (“VHS does weird things to colour and definition,” Dave enthused), White Limo is Instantly ennobled by the mighty presence of the much-missed Lemmy Kilmister, who cruises the titular vehicle around town while smoking cigarettes, drinking Jack and Coke, pulling priceless faces and gradually collecting Foo Fighters in the back of his motor. Finally he pulls a chick (played by Grohl’s wife Jordyn Blum) and drives them all off a cliff. That wasn’t mentioned in the brochure.

BIG ME (1995)
Nominated for five MTV Video Awards in 1996, this breezy and knowing parody of a 90s American ad campaign for Mentos chewy mints turned out to be the ideal fit for the song, described by Dave as a “ridiculously candy-coated pop tune”. Director (and Devo bassist) Gerald Casale brought the spoof ad concept to the band: “We’re in an age of serious, heavy videos,” he explained, “that is what we’re responding to.”

LOW (2002)
The deranged bromance between two doofus hicks spirals into slapstick perversity in this uproarious sex tape parody, featuring Dave Grohl and Jack Black getting wasted, dressing up in lingerie and trashing a motel room. It was all too much for the terminally confused MTV, who refused to broadcast the deviant un-American shenanigans. They probably wouldn’t have preferred Dave’s original plan, to just have Jack dancing in women’s pants for the whole video.

MONKEY WRENCH (1997)
Directed by Grohl, the Monkey Wrench vid opens with the frontman grooving to a cheesy synth reworking of Big Me, and develops into an Ouroboros-style recursion gag. Dave can’t enter his flat as the Foo Fighters are jamming in there; the band assemble in the hall to watch their doppelgangers through the letterbox. They eventually crash in and take up the instruments, whereupon another set of Foos arrive at the door…

THE PRETENDER (2007)
Initially a standard performance video of the band jamming in an aircraft hangar in front of a big shiny red screen, things get gradually odder as an armed riot policeman steps up to watch from a distance. Another 20 riot police emerge from the darkness and rush the band, but are thwarted when the red screen bursts, showering everything with red goo. A simple anti-authority statement with lurid gunge tank visuals? Great! Everyone’s happy.

LONG ROAD TO RUIN (2007)
Camping it up even more than usual, Dave is Davy Grolton, leading man in a spoof 1970s medical soap opera who embarks on a music career to the derision of his colleagues. The scenes of Davy lapping up the adulation of his pubescent girl fans are a particular hoot, as is the Davy Grolton Band mall concert, where the Foos have never looked cooler. Brilliantly, a full video of this performance was also released too. Watch it here.

TIMES LIKE THESE (2002)
There are two videos for this song. The ‘UK version’, with its kaleidoscopic green-screen backdrop, resembles every faux-retro promo made for no money in the 90s. The proper vid isn’t on YouTube for ‘copyright reasons’, but it’s a big-budget special effects extravaganza about people throwing their possessions off a bridge, including cars and a caravan. “It wasn’t always the easiest thing in the world to film the kind of stuff we needed and make it look convincing,” admitted director Marc Klasfeld. We’re going for the cheap-looking version as it was directed by Liam Lynch. You know, the man responsible for United States Of Whatever.

BREAKOUT (1999)
A particularly gormless Dave takes his date to the drive-in to watch dissociative identity disorder-themed Jim Carrey comedy Me Myself And Irene. When Taylor Hawkins squirts mustard all over his tank top, Dave undergoes a personality ‘breakout’ of his own, throwing the drummer across a table before taking the mic for an impromptu Foos performance. Dave’s mum flips him the middle finger in a fun cameo as an angry motorist.

WALK (2011)
Archly spoofing the 1993 film Falling Down – in which angry white middle-aged man Michael Douglas has a bad day – our hero abandons a dismal traffic jam to go round abusing minimum wage workers on his way to a Foos rehearsal. Among the loveliest touches are Dave’s amusement at the cardboard fries hat, and Taylor Hawkins’ fun with a gun in the last frame.

EVERLONG (1997)
A compelling surrealist short film veering through multiple cinematic dreamworlds, from a fairytale log cabin with Evil Dead vibes to an 80s punk rock party punch-up. Along the way Dave scrambles up a giant telephone, and the whole thing is framed with shades of 50s Twilight Zone. Grohl says it took director Michel Gondry an hour to explain his idea for the video. “I had to tell him, dude, you know this song’s four fucking minutes long, right?”

**LEARN TO FLY (1999)
**Dave displays an extraordinary range of silent comedy acting skills in this Grammy-winning parody of disaster movie Airport ‘77, from camp steward to smitten teenage fangirl. Yet still he’s upstaged by mischievous tinkers Tenacious D, and guitarist Nate Mendel as a baby. “Here I was, stuck underneath the airplane seat with my head stuck through a baby seat, crying violently while 18 people stared at me from above,” Nate told Billboard Magazine in 1999.