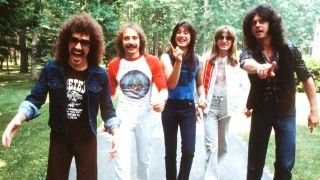 For many, Journey are the band who define AOR better than anyone else. Their catalogue glitters with anthems, which not only have massive choruses, but also the sort of musicianship you might expect from a band who began life as jazz rock instrumentalists, before embracing the melodic rock style for which they’re renowned. These are their 10 finest moments.

After taking a break from the band to work on his solo album Street Talk, vocalist Steve Perry was persuaded to return to the fold for the Raised On Radio album. While the production shows a clear-cut influence of the times, Perry’s vocals shine as brightly as ever as Jonathan Cain’s smooth keyboards complement Neal Schon’s edgy guitar stride.

This is the way Journey explained the problems of trying to carry on a relationship while out touring. One of the stand-out tracks from Frontiers, it has a soft lilt that exposes an emptiness. But this is augmented by the lush rhythm and the way that Perry croons his way through without ever wallowing in over emotional hyperbole. A power ballad in the best Journey tradition.

Anyone who thinks that Journey aren’t capable of anything other than slushy ballads really should visit this song. It has a funk groove, and while the tempo is very much of the balladic kind, Schon stabs through with some electrifying moments. What’s more, Perry’s singing soars impressively to ensure maximum dramatic impact. One of the highlights on Evolution.

The opening song from Infinity, the album that introduced Perry to the world, and also put the band’s new-found melodic style on display for the first time. It’s easy to tell why American radio fell in love with Journey at this juncture. The music is filled with commercial astuteness, the harmonies are sublime and the whole timbre of the song is evocative and stylish. This oozes the sort of class that would become the norm for Journey in the coming years.

It begins with an unvarnished piano piece from Cain, on which Perry builds his rich tone. And Ross Vallory provides some tasteful bass lines, to underline the whole feel of the song. This is the type of song that accentuates Perry’s love for great soul singers, while it also showcases the way in which Journey stood apart from all huge selling AOR masters, and why Escape is regarded as the classic Journey album.

The fact this song opens up with shards of Schon guitar riffing proves that Journey were always prepared to give full weight to the heavier side of their talent. And Perry also comes across with a lot more power than you might expect. This is a song where Journey never forget about the melody, but also give free rein to a rocky vibe. It also accentuates that Escape was always far more than a collection of power ballads.

It may seem odd, but this song was actually inspired by Thin Lizzy, with whom Journey had toured a couple of years before recording the Departure album. But when you analyse the way in which the vocals are constructed, and the interchange between the instruments, then it becomes a lot clearer. There’s a gliding feel to the guitar parts that does feel like it is Lizzy influenced, and Perry adopts a storytelling style that is close to the Lynott approach. And the whole feel suits Journey superbly.

This was co-written by Robert Fleischman, the band’s original choice of vocalist when they moved into a more commercial direction. However, when Fleischman didn’t work out and was replaced by Perry, the song was thankfully retained. It starts with a flashing guitar groove, through which Perry cuts with a vibrant performance. In some ways, this is a basic live performance from the band, bringing a heavier dynamic to bear, but this fitted right into the whole feel of Infinity, and showed Journey could pound with the best.

After the enormous success of Escape, how did the band choose to open up their next album, Frontiers? With a powerhouse rocker than fitted right into an era where AOR was beginning to become a little less reliant on studio technology and celebrated talent. Of course, the rich production is evident. But what makes the song work superbly is that way Cain, Perry and Schon intertwine. There’s a buoyancy here that tells of a band really playing off of each other’s strengths. The result is undeniably passionate.

Is there anyone on the planet who does not know this song? It has got to be one of the most exposed tracks over the past two decades or so. And, because it’s so well known, it’s very easy to lose sight of just why this is so popular. Because Don’t Stop Believin’ is a peerless example of musical genius. Everything about it is perfect – the musicality, the singing, the simple structure, the insistent melody… hell, this is not just Journey’s best song, it’s one of the truly landmark moments of the 80s.